Pharma R&D: Vaccines and Other Drugs

Surely one of the key lessons of the pandemic is the value of research and development, which in turn means the value of making the investments over time in education and equipment so that researchers are tooled up and ready to go as needed. The Congressional Budget Office has published "Research and Development in the Pharmaceutical Industry" (April 2021), which offers a useful primer in getting up to speed on some of the key trends and issues. Here are five of the main themes as I see them.

1) Research and development may play a bigger role in pharmaceuticals than in any other industry.

This figure shows how much different industries spend on R&D as a share of their "net revenues"--that is, revenues minus expenses. A few years back, pharmaceuticals were similar in their "research intensity" to industries like semiconductors and software, but in the last decade or so, pharma has become even more research-intensive. 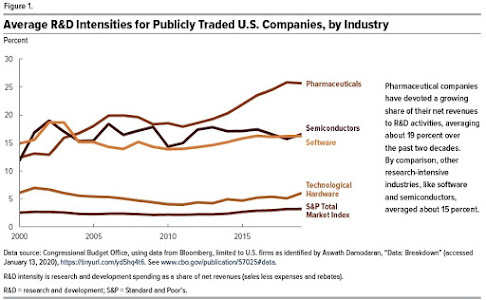 Pharma R&D spending has gone way up. The CBO writes:

In real terms, private investment in drug R&D among member firms of the Pharmaceutical Research and Manufacturers of America (PhRMA), an industry trade association, was about $83 billion in 2019, up from about $5 billion in 1980 and $38 billion in 2000. Although those spending totals do not include spending by many smaller drug companies that do not belong to PhRMA, the trend is broadly representative of R&D spending by the industry as a whole. A survey of all U.S. pharmaceutical R&D spending (including that of smaller firms) by the National Science Foundation (NSF) reveals similar trends.

Let's say that again: in real (that is, adjusted for inflation) dollars, pharma R&D is up by a factor of about 10 from the average in the 1980s and even before the pandemic had more than doubled since 2000. The CBO also points out that the cost of developing a successful new drug can commonly be in the range of $1-$2 billion, once the costs of the drugs that didn't work out are included, and the process of developing a drug so that it's ready to sell can take a decade or more.

2) There's controversy over the direction of pharma R&D spending.

Pharma companies will be attracted by producing expensive drugs for big markets. Conversely, the incentive for a drug company to spend $1 billion  and a decade addressing a smaller market or finding a lower-cost alternative to an existing money-maker will not be large. The CBO writes:

The number of new drugs approved each year has also grown over the past decade. On average, the Food and Drug Administration (FDA) approved 38 new drugs per year from 2010 through 2019 (with a peak of 59 in 2018), which is 60 percent more than the yearly average over the previous decade. Many of the drugs that have been approved in recent years are “specialty drugs.” Specialty drugs generally treat chronic, complex, or rare conditions, and they may also require special handling or monitoring of patients. Many specialty drugs are biologics (large-molecule drugs based on living cell lines), which are costly to develop, hard to imitate, and frequently have high prices. Previously, most drugs were small-molecule drugs based on chemical compounds. Even while they were under patent, those drugs had lower prices than recent specialty drugs have. Information about the kinds of drugs in current clinical trials indicates that much of the industry’s innovative activity is focused on specialty drugs that would provide new cancer therapies and treatments for nervous-system disorders, such as Alzheimer’s disease and Parkinson’s disease.

Here's a figure showing the therapeutic areas where US drug spending has increased the most in the last decade. The big ones at the top are drugs to address cancer, diabetes, and autoimmune diseases. Because these are the big markets, this is also where pharma R&D for future drugs will tend to be focused. 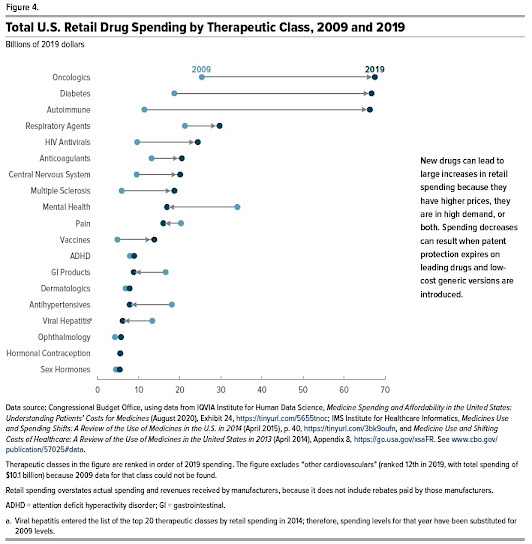 3) There's controversy over the role of larger and smaller pharma companies.

The pharma industry has developed a partial division of labor, where smaller companies are more likely to be doing R&D, and larger companies are more likely to be leading the way on the clinical testing needed before the drugs come to market. Thus, a common dynamic is that if a small company has developed a promising drug, either the drug or the entire company may be bought by a larger firm. There's nothing necessarily wrong with this dynamic. It gives successful entrepreneurs a way to start small and then cash out when successful. But it does raise a danger that big pharm companies are buying out the very firms that could, in time, have grown into being their future competitors. There's evidence that in some cases, large pharma companies have bought smaller firms with a new drug that might have competed with existing drugs--and then halted development of the new drug. The CBO writes (footnotes and references to text boxes omitted):

Although total R&D spending by all drug companies has trended upward, small and large firms generally focus on different R&D activities. Small companies not in PhRMA [the trade association of big pharma companies] devote a greater share of their research to developing and testing new drugs, many of which are ultimately sold to larger firms. By contrast, a greater portion of the R&D spending of larger drug companies (including those in PhRMA) is devoted to conducting clinical trials, developing incremental “line extension” improvements (such as new dosages or delivery systems, or new combinations of two or more existing drugs), and conducting post-approval testing for safety-monitoring or marketing purposes. ...

4) The government has always played an important role in vaccine markets, with its requirements for who needs to get vaccinated. And of course, the government played a substantial role in developing COVID-19 vaccines with the Warp Speed program.

Here's the CBO summary of what companies got money for a COVID-19 vaccine, and for what purpose.  Given the costs of COVID-19, this $19 billion probably ranks with the most cost-effective money the US government has ever spent on anything. 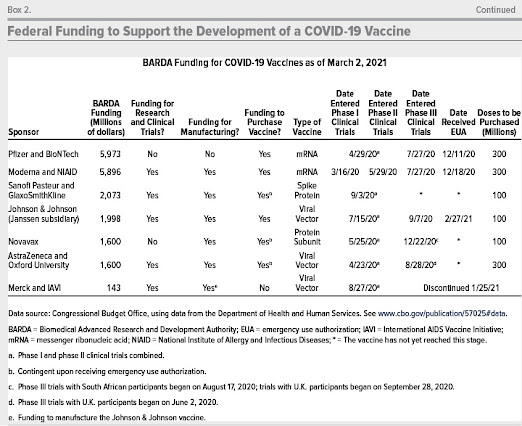 5) Research expertise in vaccines, as in many other areas, often can shift from one disease to another, so that what looks like "failure" in producing a vaccine for one disease can build expertise in addressing a different disease.

For example, it turns out that although the effort to produce an HIV vaccine has not so far been successful, many of of the technologies and skills developed in that search were useful in creating a ?COVID-19 vaccine (for discussions of this point, see here and here).

Jeffrey E. Harris argues this case in some detail in "The Repeated Setbacks of HIV Vaccine Development Laid the Groundwork for SARS-COV-2 Vaccine" (March 2021, NBER Working Paper 28587). As he points out, before AIDS the common vaccines were "dead" or "live." A "dead" vaccine (like the polio vaccine) treated the infectious organism with heat or chemicals so that it was no longer infectious, but still helped the body to produce an immune response. A "live" vaccine (like the measles vaccine) ran the infectious organism through animals or other treatments to produce a version that produced only a very mild infection--but still caused the body to produce an immune response.

But neither method worked in trying to produce a vaccine for the highly mutable AIDS virus. Instead, working on an AIDS vaccine forces researchers to think about how a vaccine might attack the molecular structure of AIDS. I won't embarrass myself by trying to summarize the progression of scientific research, but it turns out that a key "spike" protein that had been studies in the HIV research turned out to be the key protein for the mRNA vaccines that are being used against COVID-19. In addition, discussions in the trade press suggest that, in turn, the knowledge gained from the COVID-19 vaccine about mRNA technologies could help lead to a vaccine for malaria, hepatitis C, dengue--and even HIV.

The broader point is that although private pharma firms clearly have strong incentives to do R&D aimed at large existing drug markets, there is a broad social benefit from having research into many areas of vaccines and other drugs, because you can't know in advance how scientific progress will lead to practical gains.