What Do You Call a Bigger Wave of Debt?

Sometimes you work on a big and worthwhile project, and then find yourself to be overtaken by events. The project remains worthwhile, but it can suddenly feel outdated. Thus, I found myself wincing in sympathy at  Global Waves of Debt: Causes and Consequences, a World Bank report written by M. Ayhan Kose, Peter Nagle, Franziska Ohnsorge, and Naotaka Sugawara and published in March 2021.

The problem is that the report focuses on four major waves of government debt up through 2018. Of course, when the authors launched into this project they had no way of knowing that the world was on the cusp of a COVID-related surge in government debt starting in 2020.  But the result is that the authors are warning of the potential dangers of a wave of government debt given the debt levels of 2018--but pandemic-related debt wave is now bigger than they would have anticipated. For example, they write:

The global economy has experienced four waves of broad-based debt accumulation over the past 50 years. In the latest wave, underway since 2010, global debt has grown to an all-time high of 230 percent of gross domestic product (GDP) in 2018. The debt buildup was particularly fast in emerging market and developing economies (EMDEs). Since 2010, total debt in these economies has risen by 54 percentage points of GDP to a historic peak of about 170 percent of GDP in 2018. Following a steep fall during 2000-10, debt has also risen in low-income countries to 67 percent of GDP ($268 billion) in 2018, up from 48 percent of GDP (about $137 billion) in 2010. ...

Before the current wave, EMDEs [emerging market and developing economies] experienced three waves of broad-based debt accumulation. The first wave spanned the 1970s and 1980s, with borrowing primarily accounted for by governments in Latin America and the Caribbean region and in low-income countries, especially in Sub-Saharan Africa. The combination of low real interest rates in much of the 1970s and a rapidly growing syndicated loan market encouraged these governments to borrow heavily.

The first wave culminated in a series of crises in the early 1980s. Debt relief and restructuring were prolonged in the first wave, ending with the introduction of the Brady Plan in the late 1980s for mostly Latin American countries. The Plan provided debt relief through the conversion of syndicated loans into bonds, collateralized with U.S. Treasury securities. For low-income countries, substantial debt relief came in the mid-1990s and early 2000s with the Heavily Indebted Poor Countries initiative and the Multilateral Debt Relief Initiative, spearheaded by the World Bank and the International Monetary Fund.

The second wave ran from 1990 until the early 2000s as financial and capital market liberalization enabled banks and corporations in the East Asia and Pacific region and governments in the Europe and Central Asia region to borrow heavily, particularly in foreign currencies. It ended with a series of crises in these regions in 1997-2001 once investor sentiment turned unfavorable. The third wave was a run-up in private sector borrowing in Europe and Central Asia from European Union headquartered “mega-banks” after regulatory easing. This wave ended when the global financial crisis disrupted bank financing in 2007-09 and tipped several economies in Europe and Central Asia into recessions. ...

The latest wave of debt accumulation began in 2010 and has already seen the largest, fastest, and most broad-based increase in debt in EMDEs in the past 50 years. The average annual increase in EMDE debt since 2010 of almost 7 percentage points of GDP has been larger by some margin than in each of the previous three waves. In addition, whereas previous waves were largely regional in nature, the fourth wave has been widespread with total debt rising in almost 80 percent of EMDEs and rising by at least 20 percentage points of GDP in just over one-third of these economies. ...

Since 1970, there have been 519 national episodes of rapid debt accumulation in 100 EMDEs, during which government debt typically rose by 30 percentage points of GDP and private debt by 15 percentage points of GDP. The typical episode lasted about eight years. About half of these episodes were accompanied by financial crises, which were particularly common in the first and second global waves, with severe output losses compared to countries without crises. Crisis countries typically registered larger debt buildups, especially for government debt, and accumulated greater macroeconomic and financial
vulnerabilities than did noncrisis countries.

Although financial crises associated with national debt accumulation episodes were typically triggered by external shocks such as sudden increases in global interest rates, domestic vulnerabilities often amplified the adverse impact of these shocks. Crises were more likely, or the economic distress they caused was more severe, in countries with higher external debt—especially short-term—and lower international reserves.

Of course, pandemic-related debt has increased the previous debt projections. Here are some figures from the IMF Fiscal Monitor published in April 2021. The first panel shows debt/GDP ratios from 2007 to 2021. The yellow lines show interest payments, which so far have been able to remain fairly low thanks to the prevailing low interest rates. The rising debt/GDP ratios in emerging market and developing economies are clear. 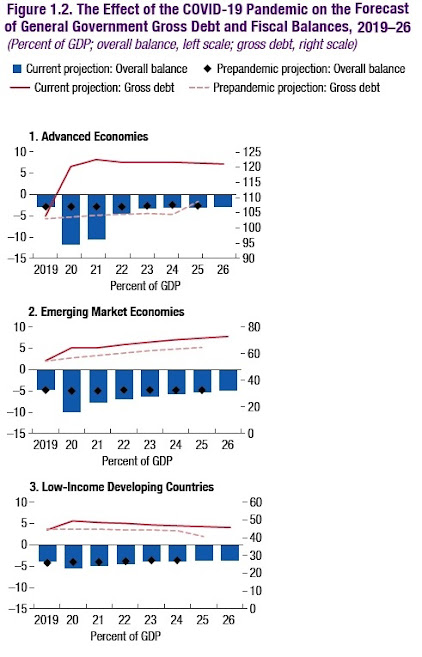 As the authors of the World Bank report above point out in their discussion, rising debt does not automatically bring disaster. The sharp-eyed reader will note that the debt/GDP ratios for advanced economies are higher than those for emerging market and developing economies. There is a general pattern that as an economy develops, the financial sector of that economy also develops in ways that typically lead to a higher debt/GDP ratios. More broadly, the depth of the financial sector and the sophistication of financial regulation will make a big difference.
On the other side, debt is often referred to as "leverage," because it magnifies the outcome of both positive and negative events for a national economy (or for a company or a household)  . With a higher level of debt, an adverse event can easily become two problems--the adverse event itself and also a debt crisis. It is concerning that this risk was viewed as high for many countries around the world, even before they increased their debt during the pandemic.
Posted by Timothy Taylor at 11:43 AM