Evolving Patterns of Innovation Across States and Industries

Patents are an imperfect measure of innovation, but they can nonetheless convey the underlying story.
Jesse LaBelle and Ana Maria Santacreu offer some interesting descriptions of how patent patterns changed between the 1980s and the 2000s in "Geographic Patterns of Innovation Across U.S. States: 1980-2010 (Economic Synopses, Federal Reserve Bank of St. Louis, 2021, #5).
To interpret these figures, it's important to know that new patents granted each year have been rising substantially over time, from about 40,000 in 1980 to 110,000 in 2010. Here's a figure showing the distribution of patents by US state: the top panel shows the 1980s, and the bottom panel shows the 2000s (that is, 2000-2010). Given that overall patent levels have risen, the figure shows many more states with higher patent levels (shown by the darker color). 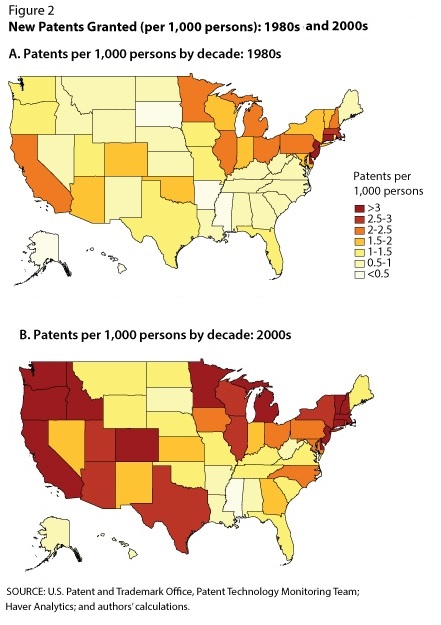 The two figures also show a geographic shift in the patterns of innovation. The authors write:

Here's a figure looking at patents by industry. Again, be cautious in comparing the top and bottom panels because the total number of patents has risen (as shown in the horizontal axis). But it is striking that in the 1980s, the distribution of patents across industries covered a reasonably wide spectrum. By the 2000s, patent activity had become much more concentrated in the "Computer and electronic products" sector. 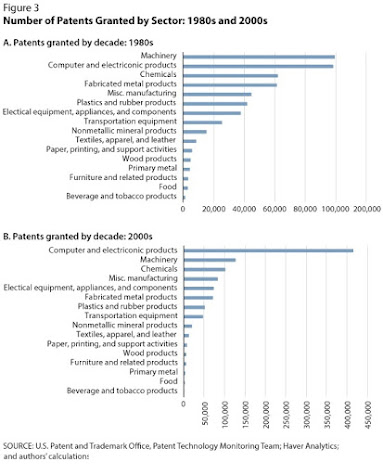 It's interesting to speculate about why patents have become more concentrated in one sector. Surely part of the reason is just the enormous technological gains made in computers and electronic products. But it's also possible that powerful companies in these industries are generating and buying patents as part of a "patent thicket" strategy to limit competitors, and it's possible that venture capitalists are more willing to support computer and electronics companies because of the possibility of lower costs and faster payoffs in this industry. For the large and diverse US economy, it seems important to have a very wide portfolio of efforts aimed at new technologies and innovation.
Posted by Timothy Taylor at 9:00 AM