The US Productivity Slowdown After 2005

In the long run, a rising standard of living is all about productivity growth. When the average person in a country produces more per hour worked, then it becomes possible for the average person to consume more per hour worked. Yes, there is a meaningful and necessary role for redistribution to the needy. But the main reason why societies get rich is by redistributing more: rather, societies are able to redistribute more because rising productivity expands the size of the overall pie.

In the latest issue of the Monthly Labor Review from the US Bureau of Labor Statistics, Shawn Sprague provides an overview in "The U.S. productivity slowdown: an economy-wide and industry-level analysis" (April 2021). In particular, he is focused on the slowdown in US productivity growth since 2005, after a resurgence of productivity growth in the previous decade. Here's a figure showing the longer-run patterns, which have birthed roughly a jillion research papers. 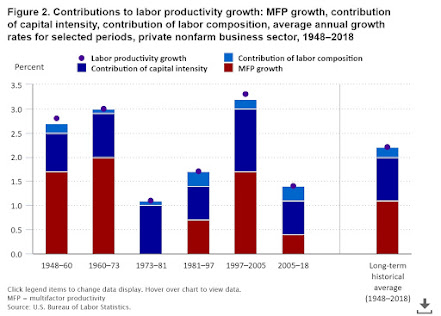 Notice that total productivity growth is robust in the decades after World War II, from 1948 to 1973. Then there is a productivity slowdown, especially severe in the stagflationary 1970s, but continuing through the 1980s and into the 1990s. There's a productivity surge from 1997 to 2005, commonly attributed to acceleration in the power and deployment of computing and information technology. But just when it seemed as if the economy might be moving back to a higher sustained rate of productivity growth, then starting around 2005, productivity sagged back to the levels of the slowdown in the 1970s and 1980s.
The figure also shows how economists break down sources of economic growth. First look at how much the quality of the labor force has improved, as measured by education and experience. Then look at how much capital the average worker is using on the job. After calculating how much productivity growth can be explained by those two factors, what is left over is called "multifactor productivity growth." This is often interpreted as changes in technology--broadly understood to include not just new inventions but all the ways that production can be improved. But as the economist Moses Abramowitz said years ago, measuring multifactor productivity growth as what is left over, after accounting for other factors, means that productivity growth is "the measure of our ignorance."

As Sprague points out, variations in multifactor productivity growth are the biggest part of changes in productivity over time.

The deceleration in MFP growth—the largest contributor to the slowdown—explains 65 percent of the slowdown relative to the speedup period; it also explains 79 percent of the sluggishness relative to the long-term historical average rate. The massive deceleration in MFP growth is also emblematic of a broader phenomenon shown in figure 2. We can see that throughout the historical period since WWII, the majority of the variation in labor productivity growth from one period to the next was from underlying variation in MFP growth, rather than from the other two components.

However, the most recent slowdown in productivity also seems to have something to do with capital investment. Sprague again:

What are some possible explanations for the growth slowdown? As Sprague writes: [N]not only has the productivity slowdown been one of the most consequential economic phenomena of the last two decades, but it also represents the most profound economic mystery during this time ..." Sprague does a detailed breakdown of economy-wide factors that may have contributed to the productivity slowdown as well as industry-specific factors. Here, I'll just mention some of the main themes.
A first set of explanations focus on the Great Recession, and the sluggish recovery afterwards. One can argue, for example, that when the financial sector is in turmoil and an economy is growing slowly, firms have less ability and less incentive to raise capital for productivity gains. This seems plausible, and surely has some truth in it, but it also has some weak spots. For example, the productivity slowdown in the data pretty clearly starts a few years before the Great Recession. Also, one might argue that in difficult times, firms might have more incentive to seek out productivity gains. Finally, it feels like a circular argument to ask "why aren't additional inputs producing output gains as large as before?" and then to answer "because the output gains were not as large as before."
A second explanation is that productivity gains at the frontier have not actually slowed down: instead, what has slowed down is the rate at which these gains are diffusing to the rest of the economy. From this point of view, the real news is a wider dispersion in productivity growth within industries, as productivity laggards fall farther behind leaders (for discussion, see here and here). At a more detailed level, "not many of the firms that have been innovating have not similarly been able to scale up and hire more employees commensurate with their improved productivity." It could also be that there are certain characteristics of productivity growth leaders--like an ability to apply leading-edge information technology to business processes throughout the company--that are especially hard for productivity laggards to follow. This lack of reallocation in the economy toward high-productivity firms may be related to other prominent issues like a decrease in levels of competition in certain industries or rising inequality.
A third explanation is that the productivity surge from 1997-2005 should be be viewed as a one-time anomalous event, and what's happening here is a long-term slowdown in the rate of productivity growth. Sprague writes:

One underlying rationale for this potential story is provided by Joseph A. Tainter. This author offers that, in general, as complexity in a society increases following initial waves of innovation, further innovations become increasingly costly because of diminishing returns. As a result, productivity growth eventually succumbs and recedes below its once torrid pace: “As easier questions are resolved, science moves inevitably to more complex research areas and to larger, costlier organizations,” clarifying that “exponential growth in the size and costliness of science, in fact, is necessary simply to maintain a constant rate of progress.” Nicholas Bloom, Charles I. Jones, John Van Reenen, and Michael Webb offer supporting evidence for this view regarding the United States, asserting that given that the number of researchers has risen exponentially over the last century—increasing by 23 times since 1930—it is apparent that producing innovations has become substantially more costly during this period.

Again, this explanation has some plausibility. But it also feels as if the modern economy does have a substantial number of innovations,  and the puzzle is why they aren't showing up in the productivity statistics.
A fourth set of explanations digs down into which industries showed the biggest falls in productivity after 1995 and which ones showed the biggest rises. Here's an illustrative figure. The industries with the biggest losses are computers/electronics products, along with retail and wholesale trade. 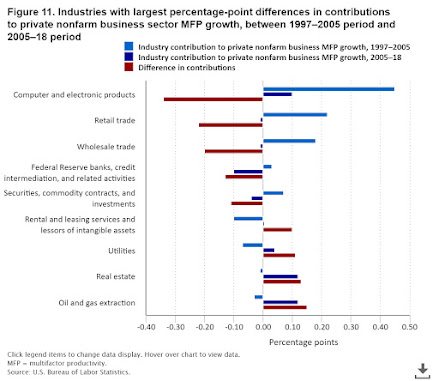 This selection of industries may feel counterintuitive, but remember that this is a comparison between two time periods. Thus, the figure isn't saying that productivity outright declined in these sectors--only that the gain after 2005 was slower than the gain in the pre-2005 decade. In computers, for example, rate of decline in  prices of microprocessors began to slow down in the mid-2000s. Similarly, retail and wholesale businesses underwent a huge change in the late 1990s and early 2000s that increased their productivity, but then the changes after that time were more modest.  In short, this is the detailed version industry-level version of the argument that the productivity rise from 1997-2005 was a one-time blip.
A final explanation, not really discussed by Sprague, is worth considering as well: Perhaps we are entering an economy where certain kinds of gains in output are not well-reflected in measured GDP gains. For example, imagine that the development of COVID-19 vaccines halts the virus. The social welfare gains from such vaccines are much larger than just the measured gains to GDP. Or imagine that a set of innovations makes it possible to reduce carbon emissions in a way that reduces the risk of climate change. From a social welfare perspective, this avoided risk would be a huge benefit, but it wouldn't necessarily show up in the form of a more rapidly expanding GDP.
Or consider the range of online activities now available: entertainment, social, health, education, retail, working-away-from-the-office. Add in the services that are available at no direct financial cost, like email, software, shared websites, cloud storage, and so on. It seems plausible to me that the social benefits from this expanding set of options are much greater than how they are measured in GDP terms--for example, by how much I pay for my home internet service or how much ad revenue is taken in by companies like Google and Facebook.

Again, this thesis has some plausibility. One never wants to fall into the trap of thinking that output as measured by GDP is also a measure of social welfare. It's well-known that GDP measures money spent on health care and money spent on environmental protection, but will have troubles measuring gains in actual health or the environment. GDP will often have a hard time measuring gains in variety and flexibility as well.
But this set of explanations also raises issues of its own. It suggests that people may be experiencing gains in their standard of living that are not reflected in their paychecks. In contrast, when productivity gains in terms of output per worker slow down, we are talking about output as measured by what is bought and sold in the economy. In short, gains in measured productivity are what can help to produce pay raises. But if these other kinds of gains are meaningful, they can't be used to pay your rent or your taxes.
Posted by Timothy Taylor at 11:50 AM