Productivity Growth and the Diffusion Problem

The reason that my standard of living is higher than that of my grandparents, or my great-great-grandparents, isn't that I work longer hours or harder than they did. It's because I have the great good fortune to live in at a time when there have already been decades and centuries of technological and productivity improvements. In the long run, productivity growth is what allows the average standard of living to rise for a country.

There's a voluminous policy agenda on how to raise productivity, but a recent report from the OECD, "The Future of Productivity," offers a new twist. The report argues that slower productivity in high-income countries is not because cutting-edge firms are slowing down in their productivity growth, but rather because other firms aren't keeping up. To put it another way, productivity growth isn't diffusing across economies. Here's a figure showing the pattern. 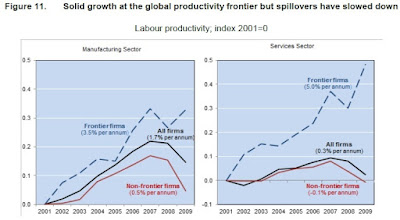 The panel on the left is for the manufacturing sector; the one on the right is for the services sector. The blue dashed line shows labor productivity for the "frontier firms," with 2001 as the starting point. The frontier firms are the 100 most productive firms in each industry, from an international perspectives, with the underlying data coming from a commercial database called ORBIS. (The report has a discussion of strengths and weaknesses of this data.) The red lines show productivity gains for non-frontier firms. As the report summarizes (footnotes omitted):

GF [Global frontier] firms have become relatively more productive over the 2000s, expanding at an average annual rate of 3½ per cent in the manufacturing sector, compared to an average growth in labour productivity of just ½ per cent for non-frontier firms. While data limitations make it difficult to say whether growth has slowed relative to earlier periods, it is interesting that frontier growth remained robust after 2004, when aggregate productivity in advanced economies (e.g. the United States) began to slow. ...Firms at the global productivity frontier are on average 4-5 times more productive than non-frontier firms in terms of MFP [multifactor productivity], while this difference is more than 10 times with respect to labour productivity (which includes capital intensity). ... Firms at the global productivity frontier are typically larger, more profitable, and more likely to patent, than other firms. Moreover, they are on average younger, consistent with the idea that young firms possess a comparative advantage in commercialising radical innovations and firms that drive one technological wave often tend to concentrate on incremental improvements in the subsequent one. However, the average age of firms in the global frontier has been increasing since 2001. To the extent that this reflects a slowdown in the entry of new firms at the global frontier, it could also foreshadow a slowdown in the arrival of radical innovations and productivity growth.

In particular, I was intrigued by a figure showing that the importance of start-up firms over time has been diminishing not just in the US economy (as I've pointed out here and here, for example), but in most other high-income economies, too. One of the primary ways for the spread of higher productivity is the creation and growth of high-productivity new firms and the shrinkage and exit of low-productivity competitors. 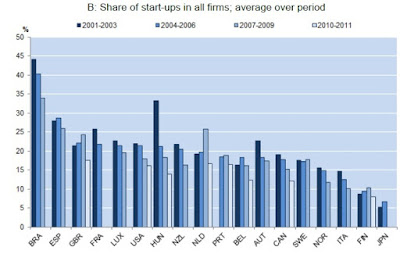