What is Discouraging the Registered Voters Who Don't Vote?

After each national election, the US Census Bureau asks questions in its Current Population Survey about whether people voted, and if not, why not. Thom File wrote the July 2015 report called "Who Votes? Congressional Elections and the American Electorate: 1978–2014."  Probably the headline finding of the report is that the percentage of Americans who voted in the 2014 federal elections was the lowest in an off-presidential-year election since the start of this data series in 1978.  The percentage of Americans who voted in presidential elections had been dropping up until about 2000, but since then has rebounded a bit. 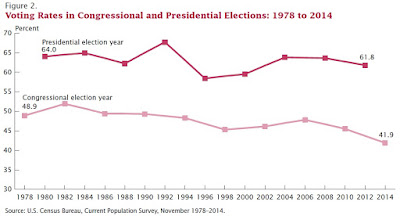 The report includes lots of detail on voting rates by different demographic groups, but what caught my eye back in the statistical tables was a listing of the main reasons given by those who didn't vote. The total of 47.6 million is the number of registered citizens who reported not voting: that is, the total doesn't include those who said "don't know" or refused to answer.  Here's the list of reasons for not voting from Table 10 of the most recent data: 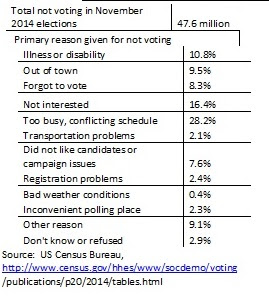 For comparison, here's the list of main reasons for not voting (again, among registered citizens who answered this question) after the 2012 presidential election. 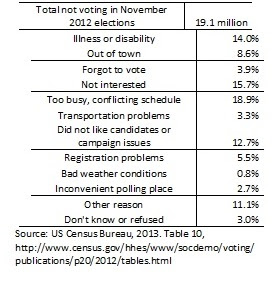 What strikes me about the list is, well, how obvious it is. Why don't people vote? Mostly because they are too busy, not interested, forgot, out of town, sick, or don't any of like the candidates. The harder question is whether it should be viewed as an important policy goal to raise the voter turnout rate; at some times and places, voting has even been mandatory. As we endure the steady diet of polling data during the next 16 months of run-up to the November 2016 election, it's worth remembering the old truth that what matters isn't what's said to pollsters, but rather who actually turns out a casts a ballot.