The Declining Number of Illegal Immigrants

The number of illegal immigrants in the United States rose very sharply through the 1990s and for almost the first decade of the 21st century, but the total peaked in 2009, and since then has declined somewhat. Jeffrey S. Passel lays out the evidence in his testimony submitted to
a hearing of the U.S. Senate Committee on Homeland Security and Governmental Affairs
on March 26, 2015.  Passel's testimony draws on two recent Pew reports, available here and here.)

Here's an overall figure, showing the total number of illegal immigrants. For those interested in methodology, these specific numbers are based on Census survey--specifically, the American Community Survey and the Current Population Survey. These surveys ask about whether someone is "foreign-born," but don't ask whether they are in the United States legally. Thus, one can take the total number of foreign-born, subtract out the number of legal immigrants, and get an estimate of the "unauthorized" population. Of course, one can raise various questions about this methodology. However, it's also possible to cross-check these numbers in various ways: for example, by looking at estimates based on data from Mexico and on evidence from local US surveys. Taking the cross-checking into account, the estimates based on the Census surveys seem plausible. 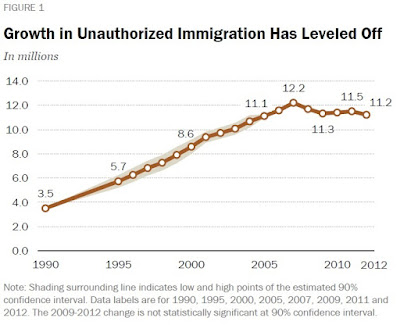 Illegal immigrants make up about 5.1% of the US workforce. Here's a list of states where the total is at that average or above. 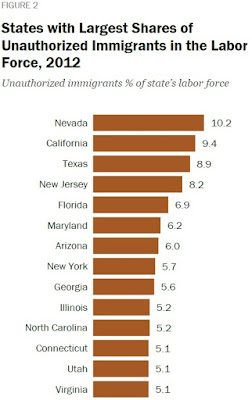 Here's a table showing the industries in which illegal immigrants are more heavily represented. 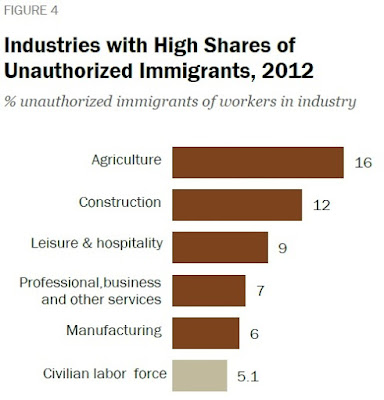 As I've argued in the past, the drop-off in illegal immigration is likely due to a confluence of forces.

1) The US economy was in recession from 2007-2009, and employment growth was slow for several year after that, so the economic "pull" attracting immigrants was reduced.

2) Mexico's economy has performed better over time, with better prospects for well-paid jobs, as well as better performance in areas like education and healthcare.

3) Mexico's demography has shifted with fewer women per children and an aging population, so the population of young adults who might be thinking about heading for the US has declined.

4) US immigration enforcement is way up, both at the border and  in terms of deportations.