One way to think about the issues involved in reducing global carbon emissions is to break down the underlying factors in this way. Consider what is called the Kaya decomposition (named after an author who used this approach about 25 years ago):

This equation is an "identity"--that is, it's a statement that's true by definition, and its purpose isn't to prove anything, but only to organize one's thinking. In this case, even if population growth in the next few decades is lower than expected, global population isn't likely to drop in a way that would bring down carbon emissions. The second term is per capita GDP,  and it is not desireable for this to decline at the global level. As the World Bank reports: "In all, 2.2 billion people lived on less than US $2 a day in 2011, the average poverty line in developing countries and another common measurement of deep deprivation. That is only a slight decline from 2.59 billion in 1981."

The ratio of energy used/GDP is sometimes called "energy intensity." It tends to fall over time as an economy grows in size, and shifts away from manufacturing and toward service industries. The ratio of carbon/energy used is sometimes called "carbon intensity." From a global perspective it had been declining for several decades, but now it has started rising. Jan Christoph Steckel, Ottmar Edenhofer, and Michael Jakob explain why in "Drivers for the renaissance of coal," published online on July 6, 2016, by the Proceedings of the National Academy of Sciences.

Here are some of their figures showing some elements of the Kaya decomposition. The top line show the rise in carbon dioxide emissions over time. The use of primary energy has risen substantially. The bottom gray  line shows that energy intensity has been falling, thus acting to hold down carbon emissions. Carbon intensity was also falling for the global economy during much of the 1970s and 1980s, but started rising in the early 1990s. 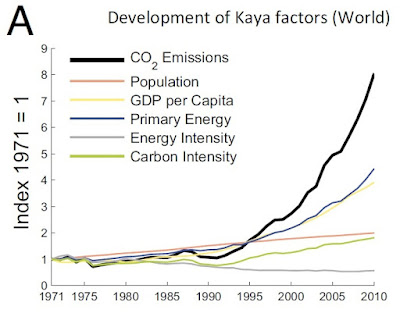 Another figure shows patterns of energy intensity by region over time. The dots represent different years from 1971-2011. To get a feeling for what's going on here, look at the pink line showing the OECD90 countries--that is, essentially the high-income countries of the world. Over time, their per capita GDP is rising (the line goes from left to right, at least until the Great Recession and its aftermath in recent years) and their energy intensity is falling (the line goes from higher to lower). This is also the pattern for the world as a whole, and the pattern for Asia and for LAM (Latin America). The patterns for MAF (Middle East and Africa) and for EIT ("economies in transition") look a little different--for example, the EIT group saw a decline in per capita income and rise in energy intensity in the 1990s. 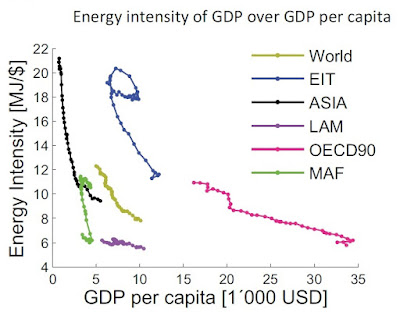 Here's the pattern over time and across regions for carbon intensity. For the high income countries (OECD90), carbon intensity has been falling over time as GDP per capita generally increased. However, the world pattern is U-shaped, with carbon intensity first falling and then starting to rise. In Asia, in particular, carbon intensity was rising sharply until the last few years, but a similar if less extreme pattern also holds in the MAF (Middle East and Africa) region. 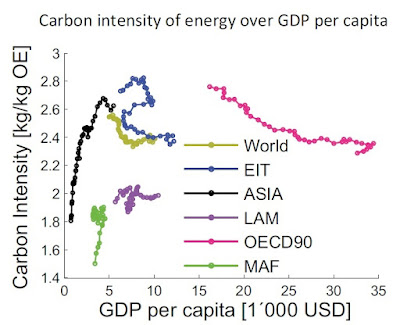 If you had to sum up the carbon intensity patterns in one word, it would be "coal." Steckel, Edenhofer, and Jakob write:


"In summary, in recent years non-OECD countries have relied increasingly on coal to meet their energy needs. The poorer a country is and the higher its rate of economic growth, the stronger is this effect. Both effects become more pronounced over time, suggesting that increasing coal use is a general trend among poor, fast-growing countries and is not restricted to a few specific countries. These results confirm the hypothesis of a global renaissance of coal. This conclusion is strengthened by the fact that excluding China and India ... hardly affects the results ... indicating that these two countries are not driving the results but rather are representative for the global sample ... This renaissance of coal has even accelerated in the last decade; this acceleration can be explained by the low prices of coal relative to other energy sources. It is interesting that the availability of domestic coal resources does not seem to have a major influence on this result for poor countries, perhaps because coal can be imported in countries with low endowments ..."

The authors make the point, bluntly and obviously, that if coal continues to rise, targets for reducing global carbon emissions will not be met.


"Developing economies now account for such a large share of global energy use that the trend toward higher carbon intensity in these countries cancels out the effect of decreasing carbon intensities in industrialized countries. If the future economic convergence of poor countries is fueled to a major extent by coal, i.e., if current trends continue, ambitious mitigation targets likely will become infeasible."

A knee-jerk reaction to this situation is to find ways to restrict or ban coal use. But from a global perspective, making energy more expensive for the poorest people in the world as they try to develop their economies would have what the authors politely call "severe distributional impacts." Instead, they emphaze two other steps. First, countries should be encouraged to pursue the self-interest of the their own citizens take the full social costs of coal into account, including the immediate short-term costs on health and output as a result of diminished air quality. If countries requiring the investment in equipment to reduce the immediate pollutants from coal, it will limit the spread of coal--and also help the health of their own citizens. Second, if coal isn't going to be the answer, other types of low-cost energy need to be encouraged. Possible alternatives in different areas need to consider everything, including dams for hydroelectric power, natural gas, oil, and even nuclear power, not just the choices popular among environmentalists in high-income countries like solar, wind, geothermal, and the like.

It is perhaps paradoxical, but also true, that if you aren't a big supporter of near-term, large-scale, non-coal methods of producing electricity around the world, you aren't really serious about reducing global carbon emissions.