Snapshots of the Global Energy

When the BP Statistical Review of World Energy is published each year, I skim through the figures and tables as a way of grounding myself in some basic facts. Here's are a few things that caught my eye this year.

Here's a figure showing the primary global sources of energy and how they have evolved over time. For comparison, the different types of energy are all converted to "oil equivalents." The green area at the bottom is oil; red is natural gas; light orange is nuclear; blue is hydroelectric; darker orange is the non-hydro renewables like solar and wind; and the gray on top is coal. As the report notes: "Oil remains the world’s dominant fuel. Hydroelectric and other renewables in power generation both reached record shares of global primary energy consumption (6.8% and 2.5%, respectively)." 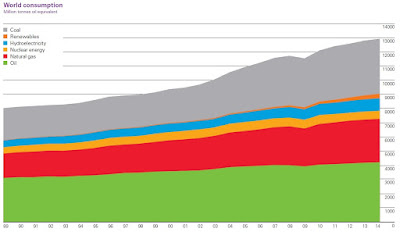 A more detailed breakdown of these sources of energy offers some additional insights. As Bob Dudley notes in his introduction to the report: "The US replaced Saudi Arabia as the world’s largest
oil producer – a prospect unthinkable a decade ago. The growth in US shale gas in recent years
has been just as startling, with the US overtaking Russia as the world’s largest producer of oil and gas." For oil, the big recent shift is the fall in prices, due both to this rising supply and because "[g]lobal primary energy consumption increased by just 0.9% in 2014, its slowest rate of growth since the late 1990s, other than immediately after the financial crisis." Here's the long-term pattern of oil prices, with the inflation-adjusted price in light green. The current price is now under $60/barrel, so you need to imagine that what looks like a relatively small drop in oil prices on the right-hand side of the figure just keeps falling. 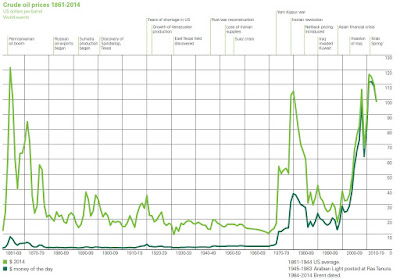 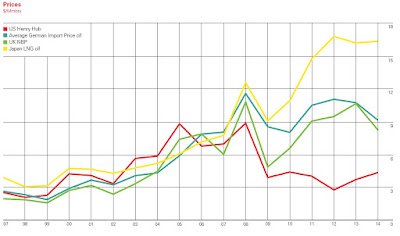 The quantity of coal consumed has been rising sharply, especially in Asia, in a way that if it continues will make it essentially impossible to achieve a significant reduction in global carbon emissions. 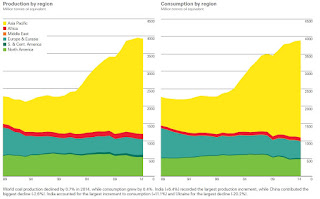 The quantity of nuclear power has declined in the last five years or so, especially in the Asia-Pacific region after the Fukushima disaster in Japan in 2011. 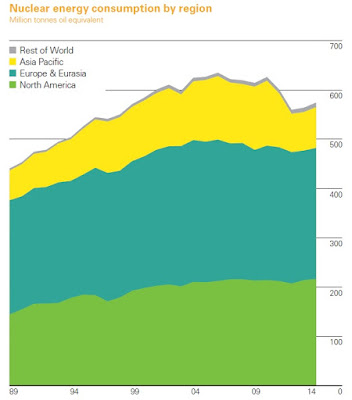 Hydroelectric power is also on the rise, especially in the Asia-Pacific region. It is notable how little hydro power there is in Africa, a region that desperately needs more and more reliable electrical power. 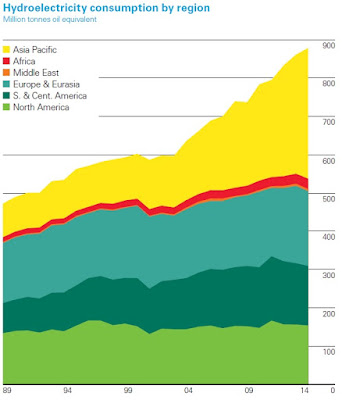 While non-hydro remain small slice of total global energy production, if one focuses just on their role in producing electricity, their share is somewhat higher--now above 10% in the Europe and Eurasia region.  Within the EU region alone, the report notes that non-hydro renewables now provide 17% of electrical power (although this has been achieved through hefty public subsidies that are now under reconsideration in a number of countries). 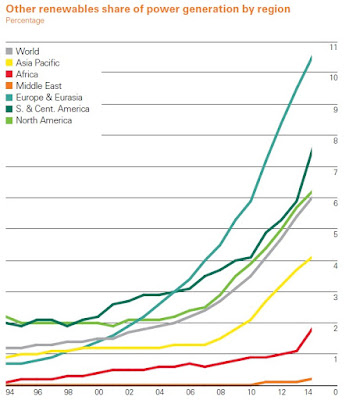