The recent decline in China's stock market is big global economic news, and it deserves to be. China is close to overtaking the US economy as the biggest of any country in the world, and large movements in its stock prices have both economic and political implications. That said, how about just a little dose of perspective on the level of China's stock prices?

Here's a figure (from Yahoo Finance) showing the level of the SSE Composite Index--that is the benchmark Shanghai Stock Exchange Composite Index--going back to 1990. Clearly, the recent spike and fall in stock prices is real and severe. Also clearly, the current spike and fall are dwarfed by what happened before and after the previous peak in October 2007. In fact, even with the recent decline, China's benchmark stock index is still well above its level at the start of 2015. The stock market losses that are now being suffered are just offsetting a portion of the upward price spike from a few months ago. 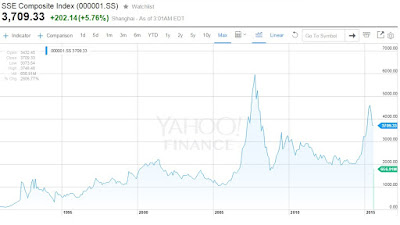 China has some real difficulties in its financial system. It's level of credit relative to GDP has risen very sharply in the last few years (for some background, see the posts here and here). At a deeper level, China's economy has had a hard time rebalancing itself as it has grown so rapidly, with one of the most prominent signs being that its level of consumption as a share of GDP had fallen to only about 35%, roughly half the level that's common in advanced economies (for discussion, see here and here). In China, this economic pattern was sometimes criticized as the "nation rich, people poor" policy. China is trying to increase consumption--thus, allowing and encouraging higher levels of credit and debt--but a lot of that buying power seems to be flowing into the stock market--thus, making frothy bubbles of price spikes and declines more likely.
Posted by Timothy Taylor at 12:30 PM