Tobacco use could lead to 1 billion premature deaths in the 21st century. That's the estimate of Prabhat Jha and Richard Peto in their 2014 review article in the New England Journal of Medicine, "Global Effects of Smoking, of Quitting,and of Taxing Tobacco" (January 2, 2014, 370: pp. 60-68).  They write (footnotes omitted):


"On the basis of current smoking patterns, with a global average of about 50% of young men and 10% of young women becoming smokers and relatively few stopping, annual tobacco-attributable deaths will rise from about 5 million in 2010 to more than 10 million a few decades hence, as the young smokers of today reach middle and old age. ...There were about 100 million deaths from tobacco in the 20th century, most in developed countries. If current smoking patterns persist, tobacco will kill about 1 billion people this century, mostly in low- and middle-income countries. About half of these deaths will occur before 70 years of age."

What might be done about it? The World Health Organization offers an overview of policy choices in "WHO REPORT ON THEGLOBAL TOBACCO EPIDEMIC, 2015: Raising taxes on tobacco." Here's a figure from the report showing prevalence of smoking around the world. The obvious concern is that rates of smoking will rise as the economies of low-income and middle-income countries grow. 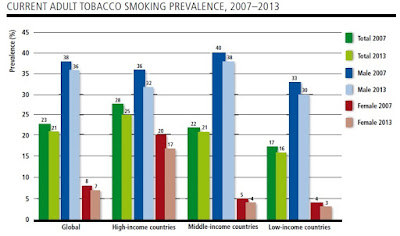 The WHO report looks at a suite of policy options, shown below, but the main emphasis of this year's report is on raising tobacco taxes to at least 75% of the retail price. Here's the full group of policies, and what share of the world population is affected by them. 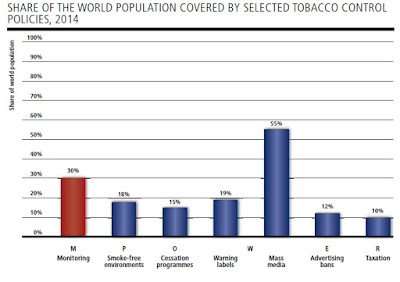 Like many teachers of economics, I suspect, I use cigarette taxes as an example of elasticity of demand--that is, how does the quantity demanded shift with an increase in price. Here are some comments from the WHO report about tobacco taxes:

"Despite the fact that raising tobacco taxes to more than 75% of the retail price is among the most effective and cost-effective tobacco control interventions (it costs little to implement and increases government revenues), only a few countries have increased tobacco taxes to best practice level. Raising taxes is the least implemented MPOWER measure – with only 10% of the world’s people living in countries with sufficiently high taxes – and is the measure that has seen the least improvement since we started assessing these data. ...

"In the United States of America (USA), cigarette prices rose nearly 350% between 1990 and 2014, in large part because of a five-fold increase in average state cigarette taxes and a six-fold increase in the national cigarette tax . During this time the number of cigarettes smoked per capita dropped by more than half, and the percentage of adults who smoke fell nearly one third. Tax and price increases in Brazil explain nearly half of the 46% reduction in adult smoking prevalence between 1989 and 2010.

"Tobacco use among young people is very price sensitive, with reductions in tobacco use in this group two to three times larger with a given price increase than among adults.  ... Tobacco use is increasingly concentrated in populations with the lowest income and socioeconomic status, and explains a large proportion of socioeconomic disparities in health. At the same time, lowest-income populations are also more responsive to price increases than higher-income users. The monetary burden of higher tobacco taxes falls more heavily on the wealthiest users, whose tobacco use declines less, while most of the health and economic benefits from reductions in tobacco use accrue to the most disadvantaged populations, whose tobacco use declines more when taxes increase. In Thailand, the Asian Development Bank estimates that 60% of the deaths averted by a 50% tobacco price increase would be concentrated in the poorest third of the population, who would pay only 6% of the increased taxes. ...

"In China, research suggests that raising taxes on cigarettes so that they account for 75% of retail prices –up from 40% of the share of price in 2010– would avert nearly 3.5 million deaths that would otherwise be caused by cigarette smoking."

With tobacco consumption, as with so many other vices that other people have, it's easy to slip into prohibitionist rhetoric. As an inveterate consumer of caffeine myself, and someone who likes a nice glass of wine or a hand-crafted bourbon from time to time, I'm not a supporter of the prohibitionist impulse. There are negative social consequences of making it too highly profitable for producers to evade government rules and overly high taxes and supply something that many people want. But tobacco use poses an enormous public health danger, and I have no problem with government making real efforts to discourage it.

For a US-focused discussion of trends in smoking since the release of the Surgeon General's report that smoking is hazardous to your health, see "Smoking, 50 Years Later" (January 28, 2014). For a discussion of the recent controversies over e-cigs and vaping, see "E-cigs: The Bootlegger/Baptist Opposition" (May 21, 2015)