Greece and its Slow Growth Problem

I knew that Greece has not traditionally been the economic dynamo behind growth in the EU economy. I had not quite realized how far the Greek economy has lagged behind over the last several decades. Here's a figure from an IMF report on "Greece: Preliminary Draft Debt Sustainability Analysis" (June 26, 2015, Country Report 15/165).

Greece joined the European Union in 1981. The The horizontal axis shows growth of "total factor productivity," or TFP, for countries of Europe from 1981 to 2014. Greece lags well behind the other countries with an annual productivity growth rate of 0.1%. The vertical axis shows growth in real GDP over time. Again, Greece lags behind with an average annual growth rate of 0.9%. Again, these are not numbers just for the last year or two, but instead are averages during a period of 33 years. 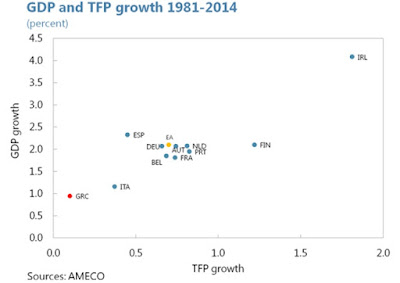 The future prospects for economic growth in Greece are, if anything, worse--indeed, one plausible projection would be for negative future GDP growth for the foreseeable future. The IMF writes:

I'm sure that Greece's economic and debt woes have many dimensions, but it's a symptom of all these issues when it become plausible to project future GDP growth as negative (even with a bounceback in investment). The IMF report is mostly a detailed breakdown of Greek debt, financing costs, needs for concessional financing and extending debt maturities, and so on, and readers who want detail on the parameters if the IMF arguments can go there. Here, let me just offer a few other snapshots of the Greek economic woes.

Here's a figure from the IMF showing the rise in Greek public debt in the last decade. The near-doubling in debt/GDP ratio from 2004 to 2011 is remarkable, and since then the problem has been one of damage containment. (The projections for the future assume that various reforms are undertaken, so they should only be swallowed with a skeptical tablespoon of salt.) As you can see, essentially all of the debt is in euros. 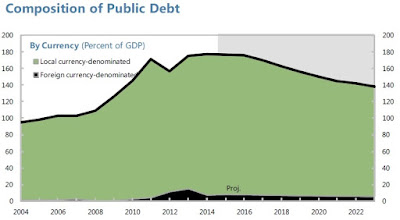 Here's a perspective on the size of the GDP in Greece, generated by the ever-helpful FRED website run by the Federal Reserve Bank of St. Louis. In the figure, GDP for 2010 is set equal to 100. Thus, from 1981 up through the early 2000s, you can see a gradual rise in growth that seems to be taking off after about 2000--of course, fed at that time by the huge accumulation of government borrowing and spending. You can also see the Depression-sized drop in output, with the economy falling by roughly one-third in size in the last 6-7 years. 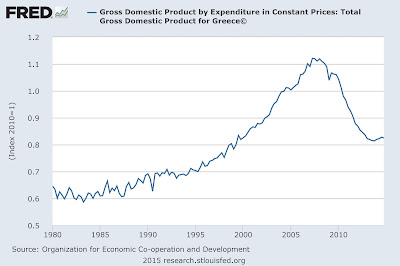 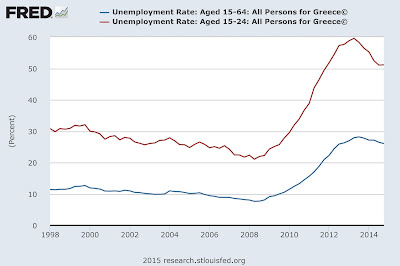