The situation of Puerto Rico as a territory of the United States is of course fundamentally different than the situation of Greece as one of the sovereign countries that are part of the European Union. But the announcement earlier this week by by Puerto Rico's governor, Alejandro García Padilla, that it will not be able to repay its $72 billion or so in debt, has some echoes of the situation in Greece. Anne O. Krueger, Ranjit Teja, and Andrew Wolfe provide a dose of useful perspective in "Puerto Rico: The Way Forward," written for the Government Development Bank for Puerto Rico and released June 29.

The basic starting point is that the ratio of government/debt GDP has been climbing in Puerto Rico for the last 15 years, while the economy has been contracting for 10. The market is now recognizing that this combination is not sustainable. The first figure shows the debt/GDP ratio. General government debt is the large gray portion at the bottom of each bar. The colored slices on top are debt accumulated by government-owned enterprises, with the biggest being PREPA, the Puerto Rico Electric Power Authority which is basically in the business of importing oil and using it to generate electricity.  Krueger et al. argue for various reasons that this debt/GDP ratio probably understates the actual level; for example, it doesn't include the liabilities of various government pension funds. Indeed, the New York Times reported that on a per capita basis, Puerto Rico has more municipal bond debt than any US state. 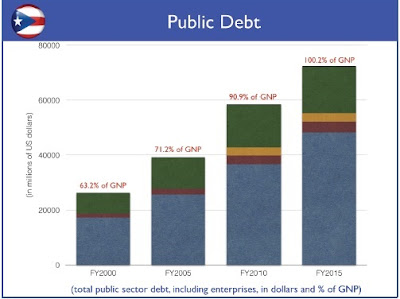 The second figure shows the inflation-adjusted GDP of Puerto Rico, peaking in 2005 and falling since then. 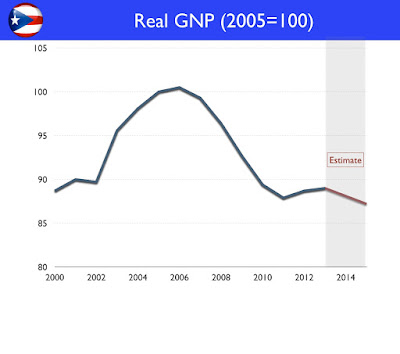 When markets perceive that debt more risky and less likely to be paid off, then anyone who buys that debt will demand a higher rate of return. Here's the rising rate of return for the PREPA debt and for general government debt. 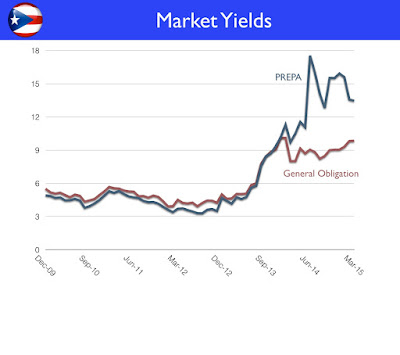 The single most telling statistic in Puerto Rico is that only 40% of the adult population – versus 63% on the US mainland – is employed or looking for work; the rest are economically idle or working in the grey economy. In an economy with an abundance of unskilled labor, the reasons boil down to two. o Employers are disinclined to hire workers because (a) the US federal minimum wage is very high relative to the local average (full--‐time employment at the minimum wage is equivalent to 77% of per capita income, versus 28% on the mainland) and a more binding constraint on employment (28% of hourly workers in Puerto Rico earn $8.50 or less versus only 3% on the mainland); and (b) local regulations pertaining to overtime, paid vacation, and dismissal are costly and more onerous than on the US mainland. Workers are disinclined to take up jobs because the welfare system provides generous benefits that often exceed what minimum wage employment yields; one estimate shows that a household of three eligible for food stamps, AFDC, Medicaid and utilities subsidies could receive $1,743 per month--as compared to a minimum wage earner’s take‐home earnings of $1,159.

There are lots of reasons for Puerto Rico's slow growth and high debt. Certain federal tax provisions for manufacturing in Puerto Rico expired in 2005. The housing price bubble was large in Puerto Rico, and the corresponding fall in the local construction industry--and the injury it did to local banks--was large as well. The sharp rise in oil prices after 2005 hurt Puerto Rico, because it depends almost entirely on imported oil for electricity. (Of course, a more innovative electricity provider would be finding ways for Puerto Rico to branch into alternative energy sources like wind, solar, perhaps even ocean thermal gradients.)

The government of Puerto Rico has been unwilling to lay off worker. The Krueger et al team report: "Puerto Rico currently has 40% fewer students but 10% more teachers than a decade ago. Teacher-student ratios are high, higher than in the mainland ..." A Wall Street Journal op-ed notes that government workers in Puerto Rico have not faced layoffs (unlike in Greece) and are typically paid about twice the average salary.

The resolution to situations like this involves some sort of deal. Any such deal tarts with a recognition by those who currently own the debt have already experienced large losses--although they not yet have recognized the fact in an accounting sense. Imagine someone you bought bonds issued by Puerto Rico that promised to pay 4-5% five years ago (as in the figure above). But now, no one will buy that bond from you at face value, because the 4-5% return isn't enough to compensate for the current risks of default. Instead, you would have to sell the bond at less than face value. It's essentially similar to buying stock, and then watching the price of the stock go down: even if you haven't yet sold the stock, it's actual value is now less--and whether you choose to admit it or not, you have in fact already lost money.

In a debt-reduction deal, those who hold the debt agree to accept some of the losses that in fact have already occurred, but hope to move to a situation where those losses will be limited. At a minimum, the lenders agree to be repaid more slowly. In exchange, the borrower offers a set of economic reforms, so that the reduced borrowing or stretched-out loans are more likely to be repaid. Of course, cutting such a deal is never easy. In the case of Puerto Rico, some of the needed reforms--like those affecting the minimum wage and the level of welfare payments--are determined by the US federal government. But the alternative of outright default won't be pretty, either.


The key to turning around Puerto Rico’s situation is a revival of growth. The island has many problems but they all result in the same outcome – a lack of growth. Structural rigidities have compromised competitiveness and yielded stagnation. Weak fiscal discipline has resulted in uncertainty that is further depressing economic activity and employment. Low growth feeds back to strains on revenue and spending. It is a vicious circle.

The good news, if you are the sort of person who can overlook the risk of screaming economic disaster in the short run and instead raise your eyes to the long-term and the big picture, is that Puerto Rico does have some notable advantages.

Puerto Rico has many advantages to build on but also important disadvantages, some within its power to tackle and some requiring federal help. Among the advantages are its natural gifts as a tropical island, the size of its college--‐educated and bilingual population, its sizable manufacturing base, its situation as an integral part of the United States, with all the attendant benefits in terms of currency stability, legal system, property rights, and federal backing of welfare, education, defense, and banking. That is a lot. At the same time, there are numerous policy failures that raise input costs and stifle growth. While some of these are within the Commonwealth’s power to fix (such as local labor regulations), others lie in the remit of the federal government and the US Congress (the minimum wage and welfare rules, the Jones Act, and Chapter 9 bankruptcy eligibility). If these could be overcome, there is no reason why Puerto Rico could not grow in new directions – likely ones like tourism, possible ones like serving as a financial/services hub between North and South America, and entirely unpredictable ones because that is how reforms have played out elsewhere. Reducing input costs for labor, energy and transport is key to regaining competitiveness, so that production can be geared to more buoyant external markets.

In the meantime, however, the population of Puerto Rico is shrinking, as people move to other parts of the United States. 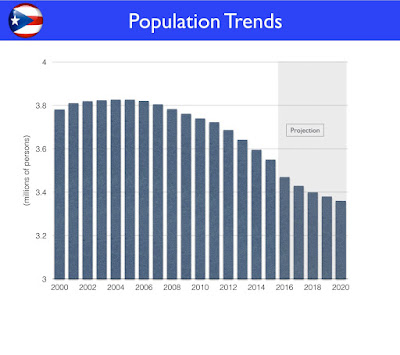