There's a widespread belief that a large share of US health care spending goes to highly interventionist end-of-life care that does little or nothing to prolong the length of life, while quite possibly reducing the quality of remaining life. What share of health care costs is spent on those in the last year of life? More broadly, what are the possibilities for holding down the rise in health care costs over time by focusing on the patients that experience the highest level of costs.

Melissa D. Aldridge and Amy S. Kelley offer some facts and background for thinking about this question in their essay "Epidemiology of Serious Illness and High Utilization of Health Care." It appears as Appendix E in a 2015 National Academy of Sciences report called Dying in America: Improving Quality and Honoring Individual Preferences Near the End of Life.

Aldridge and Kelley write: "As of 2011, the top 5 percent of health care spenders (18.2 million people) accounted for an estimated 60 percent of all health care costs ($976 billion) ...  In this high-cost subgroup, total annual costs ranged from approximately $17,500 to more than $2,000,000 per
person."  Just to be clear, this spending person includes spending by private or public health insurance on a given patient: it's not a measure of out-of-pocket health care costs. Aldridge and Kelley suggest dividing those with high health expenditures into three groups: "individuals who
experience a discrete high-cost event in one year but who return to normal health and lower costs; individuals who persistently generate high annual health care costs due to chronic conditions, functional limitations, or other conditions; and individuals who have high health care costs because it is their last year of life."

Here are a couple of diagrams to help envision this three-way division. First, here's the breakdown of the top 5% into these three groups. About half are those who experienced a high-cost event, but do not continue to be in the top group for health care expenses in the next year. Only 11% of this top-expenditures group was in the last year of life. 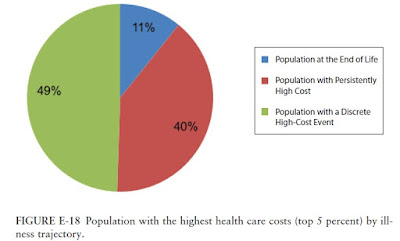 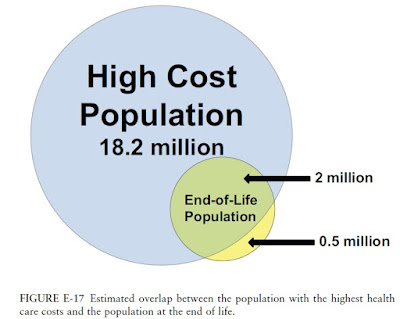 How might thinking about high-cost patients in a given year offer some guidance for holding down health care costs? As a starting point, think about those who have a high-cost event in one year, but not in the following year. One can imagine a survivor of a severe accident. Or as Aldridge and Kelley write: "Some examples of this illness trajectory might include people who have a myocardial infarction, undergo coronary bypass graft surgery, and return to stable good health after a period of rehabilitation; individuals who are diagnosed with early stage cancer, complete surgical resection and other first-line therapies, and achieve complete remission; or people who are waiting for a kidney transplant on frequent hemodialysis and then receive a transplant and return to stable health." They follow up by saying: "There may be relatively less opportunity for cost reductions in this population because many high-cost events may be unavoidable." Indeed, one might go farther and argue that this is exactly what health insurance is supposed to provide: you make payments year after year, hoping that nothing terrible will happen to you, but if it does, you have some financial protection.

What about health care practices and reimbursement policies directed toward those who had high health care expenditures in the last year of life?

The gains from reducing costs of end-of-life care shouldn't be overstated. The proportion of Medicare spending that goes to end-of-life care has been roughly the same for the last few decades at about 25%. This regularity suggests that while overall health care costs have been rising, end-of-life care is not an increasing part of that overall issue. Intriguingly, Aldridge and Kelley report: "Medicare expenditures in the last year of life decrease with age, especially for those aged 85 or older ... This is in large part because the intensity of medical care in the last year of life decreases with increasing age." Indeed, older adults as a group are a minority of those with the highest health care costs in any given year:


Our analyses of the association between older age and higher health care costs suggests that although individuals aged 65 and over are disproportionately in the top 5 percent of the population in terms of total health care spending ..., almost two-thirds of the top 5 percent spenders are younger than age 65. Although older age may be a risk factor for higher health care costs, older adults make up the minority of the high-cost spenders. Furthermore, the proportion of total annual health care spending for the population aged 65 or over (32 percent) has not changed in a decade despite the growth in the size of that population.

However, some evidence does suggest possibilities for reducing end-of-life costs. For example, in Appendix D of this same NAS report, Haiden A. Huskamp and David G. Stevenson discuss "Financing Care at the End of Life and the Implications of Potential Reforms." They point out that spending on end-of-life care varies a great deal across the country, in ways that don't seem to have anything to do with the health of patients. They write (citations omitted for readability:


Although spending on end-of-life care is uniformly high, the Dartmouth Atlas documented substantial geographic variation in use of end-of-life care services and spending by hospital referral region (HRR) over time, which researchers and policy makers viewed as evidence of wide regional differences in physician practice patterns. For example, in 2007, the average number of days spent in an ICU [intensive care unit] for chronically ill Medicare beneficiaries in the last 6 months of life varied from 0.7 in Minot, North Dakota, to 10.7 in Miami, Florida. In this same population, the percentage dying in a hospital varied from 12.0 percent in Minot, North Dakota, to 45.8 percent in Manhattan, New York, and the average number of days spent enrolled in hospice varied from a low of 6.1 in Elmira, New York, to a high of 39.5 in Odgen, Utah.

The standard prescription for reducing spending on end-of-life care is to make more use of care delivered through hospice and at home, and less use of expensive  hospital and ICU care. Many people favor such an approach in theory, but in practice, when you or your relative are involved, it can be hard to implement. One issue that should always be acknowledged in discussions of end-of-life care is that all the evidence is based on hindsight: that is, on looking back after someone has died. At the time health care decisions are actually being made, it's very difficult to figure out whether someone has a life expectancy of less than a year. As Huskamp and Stevenson write: "It is also important to note that calculations of spending in the last year of life can be made only by looking backward from the decedent’s date of death. These calculations do not necessarily reflect “real-time” decision making by patients and families about care in the final year of life, as 1-year survival is extremely difficult to predict."

For me, the biggest lesson in looking at this breakdown of the highest-cost patients is one that I've touched on before in this blog (for example, here and here), which is the importance of rethinking how the health care system deals with issues of chronic disease, especially when it is accompanied by functional limitations on behavior. Here's a breakdown from Aldridge and Kelley, showing that well over half total health care costs are attributable to those who have both chronic conditions and functional limitations.

One clear-cut example is that a large share of those in nursing homes fall into these two categories: indeed, the average person in a nursing home has health care costs that put them into the top 5% of all high-cost patients. Aldridge and Kelley write: "As of 2011, there were 1.4 million Americans residing in nursing facilities. Thus, we estimate that the average annual health expenditure per nursing home resident is more than $200,000, which is significantly higher than the $17,500 minimum average annual health expenditure required to be in the top 5 percent of health care
spenders ..."

More broadly, a lot of chronic conditions have the characteristic that if they are well-managed--say, with appropriate diet, drugs, and exercise--they will often have relatively low health care costs. However, if not well-managed, they can lead to high-cost episodes of hospitalization. The US health care system has traditionally been a lot better at providing the high-cost hospitalization than at supporting the best possible management of these conditions. Thus, Aldridge and Kelley calculate (citations omitted):


Analyses of data on chronic conditions and health care costs have found that, of the population with the highest health care costs, greater than 75 percent have one or more of seven chronic conditions, including 42 percent with coronary artery disease, 30 percent with congestive heart failure, and 30 percent with diabetes. The U.S. Department of Health and Human Services ...  reports that more than 25 percent of individuals in the United States have multiple chronic conditions, and the care of these individuals accounts for 66 percent of total health care spending. ... A recent commentary in the Journal of the American Medical Association suggests that an estimated 22 percent of health care expenditures are related to potentially avoidable complications, such as hospital admission for patients with diabetes with ketoacidosis or amputation of gangrenous limbs, or for patients with congestive heart failure for shortness of breath due to fluid overload. Reducing these potentially avoidable complications by only 10 percent would save more than $40 billion/year.

Changes in end-of-life care and in managements of chronic conditions both require cultural change in the field of medicine, with more emphasis on non-hospital, non-high-tech alternatives. But the possibilities for improved patient health and satisfaction, along with substantial cost savings, seem substantial.
Posted by Timothy Taylor at 7:00 AM