Starting in 2012, the University of Vermont began a process of requiring that all campus locations selling beverages provided 30% "healthy" beverages, and then that all locations phases out all sales of bottled water. There were two hope: 1) reduced use of bottles, when bottled water was no longer available, and 2) that healthier beverages would be consumed. In a vivid demonstration of the law of unintended consequences, bottle use rose and fewer healthy beverages were consumed. Elizabeth R. Berman and Rachel K. Johnson tell the story in "The Unintended Consequences of Changes in
Beverage Options and the Removal of Bottled Water on a University Campus," appearing in the July 2015 issue of the American Journal of Public Health (105:7, pp. 1404-1408). This journal isn't freely available online, although some readers will have access through library subscriptions.

As a starting point, here's the description of the policy change  from Berman and Johnson (footnotes omitted:


Policy changes related to the types of bottled beverages sold at the University of Vermont in Burlington, Vermont, provided an opportunity to study how changes in beverage offerings affected the beverage choices as well as the calorie and total and added sugar consumption of consumers. First, in August 2012, all campus locations selling bottled beverages were required to provide a 30% healthy beverage ratio in accordance with the Alliance for a Healthier Generation’s beverage guidelines. Then, in January 2013, campus sales locations were required to remove bottled water while still maintaining the required 30% healthy beverage ratio.

They collected data on the beverages shipped to the sellers at the University of Vermont campus, and used that data as a basis for estimating consumption of bottled beverages. The study didn't try to estimate consumption of other beverages, like fountain drinks or coffee served in cafeterias. They found:

(For those who don't read statistics, the P numbers in parenthesis are telling you that these changes after the policy took effect are statistically significant--that is, unlikely to have happened by chance.) 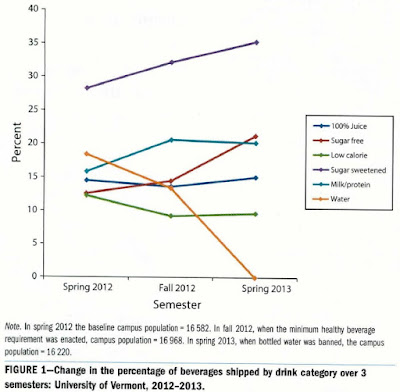 This finding is not an enormous surprise, because a reasonable amount of survey data suggests that many people switch from sugar-sweetened drinks to bottled water, and that if bottled water isn't available, many of them will switch back. Of course, one can always argue that with more time and better community education, more people will shift to carrying their own water bottles, so that bottle usage will indeed eventually fall and people will shift to healthier drinks. But remember, this policy change was enacted among university students in Burlington, Vermont, which as the authors say is " "a midsized city that is notoriously invested in both environmental and physical well-being." Moreover, the authors report: "The university made several efforts to encourage consumers to carry reusable beverage containers. Sixty-eight water fountains on campus were retrofitted with spouts to fill reusable bottles, educational campaigns were used to inform consumers about the changes in policy, and free reusable bottles and stickers promoting the use of reusable bottles were given out at campus events."

It seems to me that true believers in the power of community education should see no particular need for proposals to ban water bottles or mandate a healthier mixture of drinks. It's only if you doubt the power of such education that bans on bottled water become a plausible option. The authors report that "[m]ore than 50 colleges and universities have banned the sale of bottled water." Time for a few more studies to find whether such bans are having any environmental or health benefit.