Variations in US Per Pupil Education Spending

There is extraordinary variation across US states and school districts in K-12 education spending per pupil. The US Census Bureau offers a slice of the evidence in its June 2015 report Public Education Finances: 2013. The report is basically a bunch of tables compiled from the 2013 Annual Survey of School System Finances, a comprehensive survey of the 15, 144 school districts across the United States. Here, I've just lifted a couple of columns out of individual tables.

As a starting point, here is per student spending across US states and the District of Columbia. The US average is $10,700 per student. The top six on this list spend more than 50% per student above that level. The bottom 10 spend at least 20% less per student. 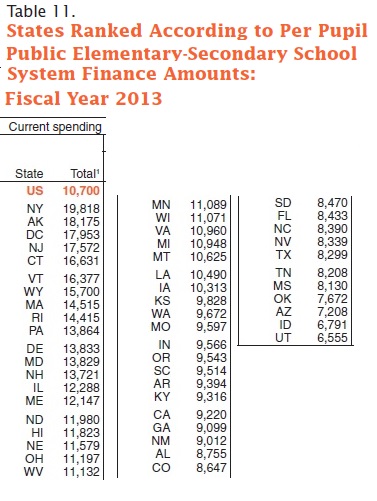 The second table looks at enrollment sizes and per pupil spending in the 50 largest school districts. 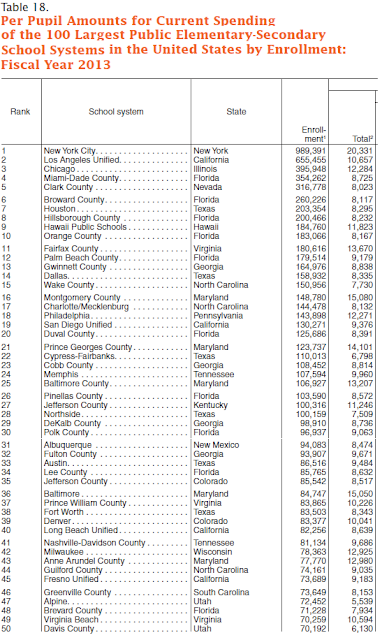 The US Census report is just tables of numbers. It doesn't offer any analysis of conclusions. Without trying to turn this into a far-ranging discussion of education reform issues, here are a few points that jump out at me from these tables.

1) Most K-12 education spending is salaries and benefits, whether for teachers or administrators and support personnel. (The report offers state-by-state breakdowns in these categories.) It's not a surprise that those working in K-12 education tend to get paid more in states with higher income levels, and thus, it's not a surprise that states with higher income levels often tend to have higher per pupil education spending. But even with this factor taken into account, northeastern locations seem to have higher per pupil spending. As you read down from the top of the list, you quickly find, New York, the District of Columbia, New Jersey, Connecticut, Vermont, Massachusetts, Rhode Island, Pennsylvania, Delaware, Maryland, and New Hampshire. To say this a little differently, what is thought of as a "normal" or "usual" level of per pupil education spending varies dramatically across US regions.

2) There are a couple of exceptions to this near-monopoly of northeastern locations near the top of per pupil spending list. Alaska really stands out. It ranks second in spending per student. A different table in the report shows that if one looks total K-12 education spending in proportion to per capita income in a given state, Alaska leads the way by a considerable margin. [In an earlier version of this post, I confused the postal abbreviations for Alaska (AK) and Arkansas (AR). My bad.] Wyoming is another non-northeastern state with high per pupil spending.

3) The sheer size of enrollments of the largest US school districts always shocks me. The New York City schools have nearly a million K-12 students; the Los Angeles schools have 655,000 students; and the Chicago schools have almost 400,000 students. Miami-Dade County has 354,000 students, and is next door to Broward County (including the Fort Lauderdale area) with another 260,000 students. Given the huge differences across enrollment levels even in the top 50 school districts, and obvious question is whether running an ultra-large school district has economies of scale or diseconomies of scale. That is, does large size offer a way to save money on a per student basis, perhaps by centralizing administration or taking advantage of district buying power? Or does large size cost money on a per student basis, because layers of administration in running a school district with several hundred thousand students become inefficient? I don't know of systematic evidence on this point, taking all the variables into account.

5) Baltimore has been much in the news lately. This list shows that five school districts in Maryland are in the top 42 nationally in number of students: Baltimore, Montgomery County, Prince Georges County, Baltimore County, and Anne Arundel County. All of them are well above average in per-student spending.

6) Glancing at these data with the variation across states and school districts should help to explain why it's hard to spot a clear-cut correlation between levels of per pupil education spending and educational outcomes like graduate rates and test scores.

Countries with higher per capita GDP tend to spend more on education, and in fact, average US per student spending on K-12 education is pretty much in line with what would be expected from the US level of per capita GDP.  But averages often don't tell the most interesting part of the story. As we say in my  part of the world, "on average" the Great Lakes never freeze.