The Internet of Things

Like most people, I tend to think of the Internet as digital, carrying information, images, text, music, and the like. But we seem to be standing on the edge of what is commonly called the "Internet of Things," in which physical objects--including machines, electrical systems, land, people, and animals--all become increasingly connected to online networks. A group of researchers at the McKinsey Global Institute--James Manyika, Michael Chui, Peter Bisson, Jonathan Woetzel, Richard Dobbs, Jacques Bughin, and Dan Aharon--discuss some of the possibilities and pitfalls in their June 2015 report: "Unlocking the potential of the Internet of Things." They write:


The Internet of Things is still in the early stages of growth. Every day more machines, shipping containers, infrastructure elements, vehicles, and people are being equipped with networked sensors to report their status, receive instructions, and even take action based on the information they receive. It is estimated that there are more than nine billion connected devices around the world, including smartphones and computers. Over the next decade, this number is expected to increase dramatically, with estimates ranging from 25 billion to 50 billion devices in 2025.

What are the potential gains from the Internet of Things? Here's a list, inevitably somewhat speculative, of nine areas where gains from the Internet of Things could be large. For example, sensors seem likely to help people manage illness and improve wellness. they seem likely to help retail stores with layout, checkout, and in-store customer support. It will help factories run equipment and manage supplies in ways that add to efficiency. It will help cities with traffic management, as well as managing resources from water to infrastructure repair to police time. 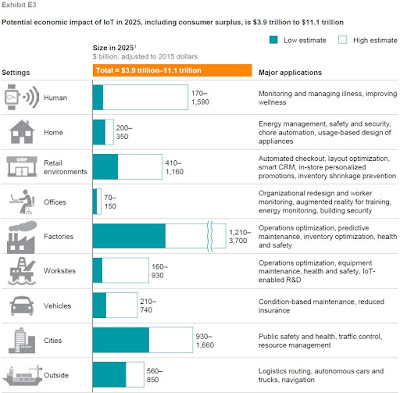 Some aspects of the Internet of Things may feel like science fiction. As the McKinsey writers emphasize, the development of Internet of Things capabilities will require continued dramatic developments in computing speed, wireless communication, and interoperability and interconnectedness across many systems and devices. But perhaps more difficult than the technological changes are some of the social risks and legal issues involved. Here are three examples:

ƒƒPrivacy and confidentiality. The types, amount, and specificity of data gathered
by billions of devices create concerns among individuals about their privacy and among
organizations about the confidentiality and integrity of their data. Providers of IoT [Internet of Things] enabled products and services will have to create compelling value propositions for data to be collected and used, provide transparency into what data are used and how they are being used, and ensure that the data are appropriately protected.

Security. Not only will organizations that gather data from billions of devices need to be able to protect those data from unauthorized access, but they will also need to deal with new categories of risk that the Internet of Things can introduce. Extending information technology (IT) systems to new devices creates many more opportunities for potentialbreaches, which must be managed. Furthermore, when IoT is used to control physical assets, whether water treatment plants or automobiles, the consequences associated with a breach in security extend beyond the unauthorized release of information—they could potentially cause physical harm.

Intellectual property. A common understanding of ownership rights to data producedby various connected devices will be required to unlock the full potential of IoT. Who has what rights to the data from a sensor manufactured by one company and part of a solution deployed by another in a setting owned by a third party will have to be clarified. For example, who has the rights to data generated by a medical device implanted in a patient’s body? The patient? The manufacturer of the device? The health-care providerthat implanted the device and is managing the patient’s care?

My own sense is that these kinds of issues will tend to push us away from a world in which everything is continuously interconnected, because 24/7 interconnectedness is just too susceptible to problems of privacy and security, with too much information floating around loose. I can  more easily imagine a world in which many objects connect and then disconnect from the Internet on an occasional basis as needed for their functionality, or a world in which the connectedness of things is mediated through local networks. This approach would allow most of the gains from the Internet of Things, but without setting up a situation where someone who hacks the local electricity company can looking into individual home and turning the lights on and off.
Posted by Timothy Taylor at 7:00 AM