The availability of a bank account is a big help to individuals, and to an economy. For the individual, it provides safety for saving, a channel for receiving and making payments, and the possibility of getting a loan at a more reasonable rate than offered by an informal money-lender. An economy in which many people have bank accounts will find it easier to make transactions, both because buying and selling are easier and because whether a payment was in fact made can be verified by a third party. The record-keeping in a bank also helps to limit certain kinds of corruption, by identifying where money went. For all of these reasons, attachment to the formal financial sector is a useful metric of economic development.


The Global Financial Inclusion (Global Findex) database provides in-depth data showing how people save, borrow, make payments, and manage risk. It is the world’s most comprehensive set of data providing consistent measures of people’s use of financial services across economies and over time. The 2014 Global Findex database provides more than 100 indicators, including by gender, age group, and household income. The data collection was carried out in partnership with the Gallup World Poll and with funding by the Bill & Melinda Gates Foundation. The indicators are based on interviews with about 150,000 nationally representative and randomly selected adults age 15 and above in more than 140 economies.

Here are some of the headline results:


Between 2011 and 2014, 700 million adults became account holders while the number of those without an account—the unbanked—dropped by 20 percent to 2 billion. What drove this increase in account ownership? A growth in account penetration of 13 percentage points in developing economies and innovations in technology—particularly mobile money, which is helping to rapidly expand access to financial services in Sub-Saharan Africa. Along with these gains, the data also show that big opportunities remain to increase financial inclusion, especially among women and poor people. Governments and the private sector can play a pivotal role by shifting the payment of wages and government transfers from cash into accounts. There are also large opportunities to spur greater use of accounts, allowing those who already have one to benefit more fully from financial inclusion. In developing economies 1.3 billion adults with an account pay utility bills in cash, and more than half a billion pay school fees in cash. Digitizing payments like these would enable account holders to make the payments in a way that is easier, more affordable, and more secure.

The report presents a wealth of data on accounts, mobile money, saving, loans, credit and debit cards, online payments by employers and government, and more. Here, I'll just mention a few points that caught my eye. Here's an overall figure of the percentage of adults with a formal financial account in different regions. 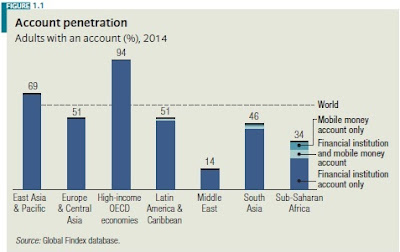 Clearly, sub-Saharan Africa is an interesting case because of the number of people who have a "mobile money" account that can be accessed on-line, but not a formal bank account (quotation omits footnotes and references to figure).

For a take on mobile money on Africa from a few years back, Jenny C. Aker and Isaac M. Mbiti. wrote "Mobile Phones and Economic Development in Africa" for the Summer 2010 issue of the Journal of Economic Perspectives (24:3, pp. 207-32). (Full disclosure: I've been Managing Editor of the JEP since 1987.)
There's solid evidence that access to the formal financial sector affects patterns of lending.

Globally, 42 percent of adults reported having borrowed money in the past 12 months. The overall share of adults with a new loan—formal or informal—was fairly consistent across regions and economies, with Latin America and the Caribbean at the low end with 33 percent and Sub-Saharan Africa at the high end with 54 percent. But the sources of new loans varied widely across regions.

Finally, it's worth remembering that lower-income households in the United States are more likely to lack a bank account than those in other high-income countries. The problem of the unbanked and underbanked isn't just a problem for the poor countries of the world. 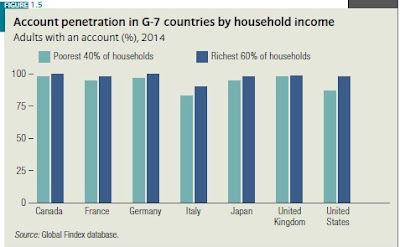 For those who would like more detailed US data, the Federal Deposit Insurance Corporation does an biennial "National Survey of Unbanked and Underbanked Households." The most recent survey, published in 2014 with data for 2013, is available here. Some headline results are "7.7 percent (1 in 13) of households in the United States were unbanked in 2013. This proportion represented nearly 9.6 million households. 20.0 percent of U.S. households (24.8 million) were underbanked in 2013, meaning that they had a bank account but also used alternative financial services (AFS) outside of the banking system." I offered some additional discussion of the previous round of this survey a couple of years ago in a post about "The Unbanked and Underbanked" (September 24, 2012).
Posted by Timothy Taylor at 7:00 AM