The geological starting point for thinking about the economics of fresh water is understanding that while about 70% of Earth's surface is water, fresh water is much more scarce. As a result, how the available fresh water supplies are managed and priced--and even the potential for some cost-effective large-scale desalination plants--makes a huge difference in whether water is available when needed.

As a starting point, here's a graphic from the US Geological Survey with a planetary view of water. The bar on the far left shows that of all the water on the planet, 2.5% is fresh water. The second bar shows that out of that 2.5%, about two-thirds is in glaciers and ice-caps. Most of the rest is groundwater, including underwater aquifers. The surface water that we actually see--like lakes and rivers--is a tiny percentage of the available freshwater. 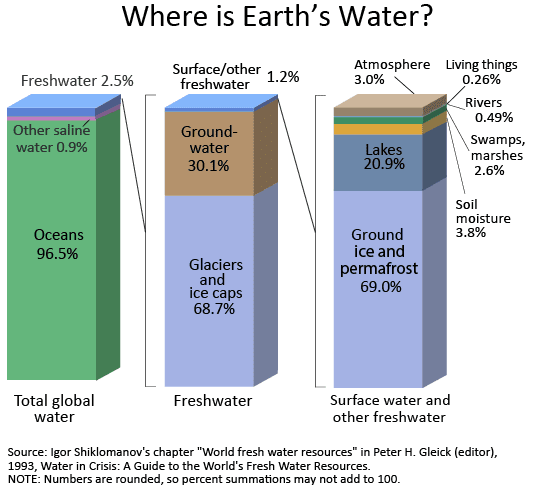 Water policy has many challenges. At a basic physical level, water can be viewed as an indestructible resource, cycling through the global ecosystem and never being used up. But when patterns of natural water supply shift (say, because of drought) or patterns of water demand shift (say, because of growth of population in certain areas and the food and industry supporting that population, then quantity supplied and quantity demanded can move out of alignment. Water can be stored, stored, transferred, recycled, and used at different quality levels, all of which commonly uses an infrastructure of reservoirs, canals, pipelines, pumps, and pipes, all tied together with underground aquifers and above-ground rivers and lakes. An IMF staff team offers a primer on many of the issues in their June 2015 report,"Is the Glass Half Empty or Half Full? Issues in Managing Water Challenges and Policy Instruments. The listed authors are Kalpana Kochhar, Catherine Pattillo, Yan Sun, Nujin Suphaphiphat, Andrew Swiston, Robert Tchaidze, Benedict Clements, Stefania Fabrizio, Valentina Flamini, Laure Redifer, and Harald Finger. Here are some facts and insights from the paper.

The quantity of water used by households and the price paid for water by households varies dramatically, both within and across countries. Here's a comparison using data from cities in a number of high-income countries. 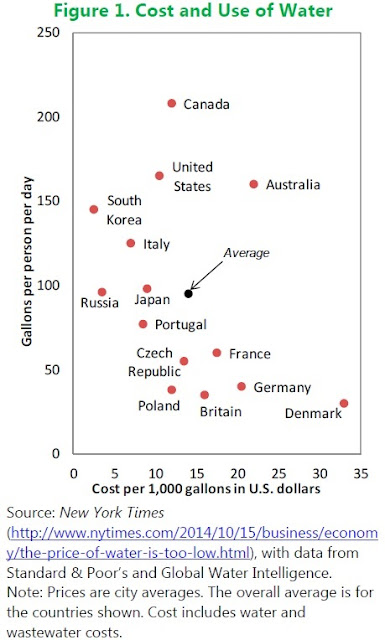 This variation in price and quantity consumed reflects a deeper pattern that countries have made extremely different choices about water infrastructure, and have evolved very different habits about water use. There are examples of countries that in the past seemed to have plentiful natural supplies of fresh water, but because of poor investments in infrastructure and underpricing of water supplies, find their water sector under considerable stress. Examples include Pakistan and Democratic Republic of Congo. Other countries that lack natural supplies of fresh water have combined investments in infrastructure with pricing practices that have led to much less stress. An example of a low-income country cited by the IMF is Burkina Faso. Here's the IMF report:


Lack of proper management exacerbates water challenges, even in countries with abundant water endowment. A case in point is Pakistan, where, despite an abundance of water a few decades ago, lagging policies have raised the prospect of water scarcity that could threaten all aspects of the economy. The bulk of Pakistan’s farmland is irrigated through a canal system, but canal water is vastly underpriced, recovering only one-quarter of annual operating and maintenance costs. Meanwhile, agriculture, which consumes almost all annual available surface water, is largely untaxed. The combination of these policies leads to overuse of water. In the Democratic Republic of the Congo (DRC), a country with an extensive system of rivers and lakes, years of poor management, conflicting water sector regulations, and low cost recovery have created a situation in which consumption of drinking water is far below the regional average and only a fraction of agricultural land is irrigated. ...

Experiences in some countries with naturally limited water resources have shown that
sound water management can be achieved and water challenges are not insurmountable. ... One notable innovation in Burkina Faso is the Bagre “growth pole,” in which a huge manmade reservoir supports diverse activities, such as fishing and irrigation for crops. ... For example, Burkina Faso introduced a progressive tariff grid for drinking water based on the volume of use, with the higher tiers subsidizing the lowest tier as well as part of sanitation activities.

One can of course add the western United States in the last few years as an example of a situation where drought and growing population, together with decades of not investing in water-related infrastructure, are combining to cause water-related stress for households and the economy. I offers some discussion of these issues in "The economics of water in the American West" (October 29, 2014).


The pricing of water makes a big difference. It both provides a substantial share of the funding for water-related infrastructure, and also shapes the incentives for water conservation. However, in many countries water is a subsidized good, often based on the argument that the poor should have access to water. However, in low-income countries, such subsidies typically mostly benefit those with high incomes. The IMF report:

Water subsidies, defined as the difference between actual water charges and a reference
price that covers all supply costs, are inequitable. They benefit mostly upper-income groups in developing economies, as the poor often have limited or no access to piped water and improved sanitation. Even when the poor have access to piped water, lower levels of use mean they capture a smaller share of the benefits compared with other groups. For example, Cabo Verde, India, Nepal, and Nicaragua provide the richest households with $3 worth of subsidized water, on average, for every $1 worth provided to the poorest households. ... [W]ater subsidies are estimated at about US$456 billion, or about 0.6 percent of global GDP in 2012, the latest year for which data are readily available. ... Developing Asia has the largest subsidies in absolute terms (US$196 billion), with China accounting for more than two-thirds of that amount. Cost recovery is particularly low in South Asia despite its higher externalities from groundwater depletion. Subsidies are also substantial at the country level, reaching above 5 percent of GDP in seven countries: Azerbaijan, Honduras, Kyrgyz Republic, Mongolia, Tajikistan, Uzbekistan, and Zimbabwe.

Given a growing global population, water "withdrawals"--that is, the uses of fresh water for human purposes--are going to keep rising. Here are some historical figures. In effect, as water circles through the natural ecosystem, people are tapping into that water supply more frequently and in more places.

As a result, stresses over water are going to keep rising. As the IMF staff writes:


Long-term scenarios forecast large increases in water use that, for many countries,
cannot be met by existing supplies. With expected growth in population and economic activity, future global water use will far exceed today’s level.At the same time, freshwater availability is expected to remain more or less fixed in the coming decades. While expecting further improvements in efficiency is not unreasonable, their impact is highly uncertain. The consensus among analysts is that even substantial technological advances and investment would be insufficient to close the projected future gaps between water supply and water use.

Desalination is a current wild card in the economics of fresh water. In Israel, the long-term projections are that almost all of the future increase in water supplies will happen through desalinization. Technology Review lists "megascale desalination" as one of its 10 breakthrough technologies for 2015.


"On a Mediterranean beach 10 miles south of Tel Aviv, Israel, a vast new industrial facility hums around the clock. It is the world’s largest modern seawater desalination plant, providing 20 percent of the water consumed by the country’s households. ... The Sorek plant incorporates a number of engineering improvements that make it more efficient than previous RO [reverse osmosis] facilities. It is the first large desalination plant to use pressure tubes that are 16 inches in diameter rather than eight inches. The payoff is that it needs only a fourth as much piping and other hardware, slashing costs. The plant also has highly efficient pumps and energy recovery devices. ... Sorek will profitably sell water to the Israeli water authority for 58 U.S. cents per cubic meter (1,000 liters, or about what one person in Israel uses per week) ..."

(Incidentally, this description of why a larger desalination plant matches one of my favorite examples for  "Illustrating Economies of Scale" (May 21, 2012). In operations where there are lots of pipes, like chemical plants as well as desalination facilities, doubling the diameter of a pipe means that the circumference of the pipe doubles, which roughly means doubling the cost of producing the pipe. However, when circumference doubles, the cross-section (area) of the pipe rises by a factor of four. In this way, large-scale plants with lots of pipes have an economies-of-scale advantage over similar smaller-scale plants.)

Southern California is giving desalination a try, too. In the January 2015 issue of Technology Review (not freely available online), David Talbot describes some new steps in desalinization in "Desalination out of Desperation: "San Diego County, hot, dry, and increasingly populous, offers a preview of where much of the world is headed. So  too does a recent decision by the county government: it is building  the largest seawater desalination plant in the Western Hemisphere, at a cost of $1 billion. The massive project, in Carlsbad, teems with nearly 500 workers in yellow hard hats. When it’s done next year, it will take in more than 100 million gallons of Pacific Ocean water daily and produce 54 million gallons of fresh, drinkable water. While this adds up to just 10 percent of the county’s water delivery needs, it will, crucially, be reliable and drought-proof—a hedge
against potentially worse times ahead."

Desalinization isn't going to make a major difference in global freshwater supplies in the near- or the medium-term. But the price of desalinization seems likely to keep falling, and in certain oceanside locations that can support billion-dollar infrastructure investments, it seems certain to become increasingly important.