Expanding Health Insurance in 2014: How Much Progress?

One of the most prominent claims made by supporters of the Patient Protection and Affordable Care Act of 2010--now commonly called "Obamacare" both by many supporters and opponents--is that it would substantially reduce the number of Americans without health insurance. How is that working out? Probably the best source of information is the National Health Interview Survey that is conducted by the National Center for Health Statistics. The survey asks about a full range of health and insurance issues, and it is carried out continually through the year, so that results can be reported on a quarterly basis. In 2014, the sample size includes about 110,000 people.

The most recent NHIS reports came out earlier this week. Robin A. Cohen  and Michael E. Martinez authored "Health Insurance Coverage: Early Release ofEstimates From the National Health Interview Survey, 2014," with a focus on annual data for 2014. However, the expansion of health insurance "exchanges" and expansions of Medicaid coverage under the Affordable Care Act started in January 2014. As the authors note: "The 2014 estimates after implementation are based on a full year of data collected from January through December2014 and, therefore, are centered around the midpoint of this period." So in looking for patterns in the extent of health insurance coverage that are emerging through 2014, it is also useful to look at the more detailed NHIS data broken down by quarter--with the fourth quarter of 2014 being the most recent data available.

Here's the overall pattern for those lacking health insurance on an annual basis. The proportion of uninsured had peaked back around 2009 and 2010 in the immediate aftermath of the Great Recession, and had been declining since then. The decline does look more rapid in 2014, although of course the figure doesn't reveal how much is due to the improving economy and employment situation and how much is due to the provisions of the 2010 legislation that started to be enacted in January 2014. 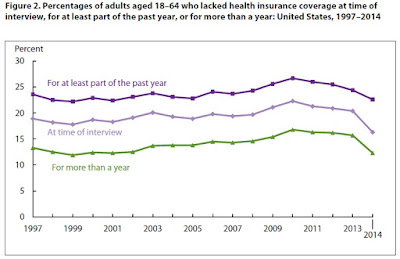 For a different perspective, here's the share of people in various age groups who received health insurance through the exchanges in the four quarters of 2014. It looks as if the share rose after the first quarter of 2014, but hasn't shown much trend since then. 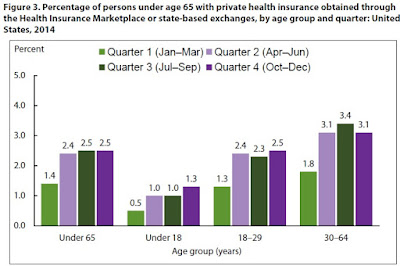 Here's a more detailed quarter-by-quarter look through 2013 and 2014. the proportion of uninsured is already dropping in 2013, from 17.1% in 2013:Q1 to 16.2% by 2013:Q4. It then keeps falling in 2014, down to 12.1% by 2014:Q4. (The numbers in parenthesis are "standard errors." For those not initiated into the mysteries of statistics, it provides information about the precision of the estimate by telling you that the number given is accurate, plus or minus the amount in parentheses.)

Again, sorting out how much of this is due to the legislative changes and how much is due to an improving economy is a challenge. But a quick-and-dirty approach would note that the share of people receiving public health coverage rose by 0.8% from 2014:Q1 to 2014:4, and the share of people getting exchange-based private health insurance rose from nothing to 2.5% by 2014:Q4. You can't just add these percentages to get an effect from the 2010 legislation. In some cases, private firms may have decided not to offer health insurance in a way that pushed people into the exchanges. The share getting public health insurance would also have been affected by employer choices and the economy, along with the legislation. But until a more systematic study comes along, it seems fair to say as a rough estimate that during 2014, the Affordable Care Act increased the share of Americans with health insurance by 2-3 percentage points.

Those who favored the legislation will call this "success." Those who opposed the legislation will raise questions about the cost, emphasize that the law is nowhere near assuring health insurance for all, and point out that if the legislation had been sold as a moderate expansion of Medicaid and building up private insurance exchanges, the law could have been a lot shorter. But for either side, this relatively modest reduction in the number of uninsured shouldn't come as a big surprise. Even supporters of the 2010 legislation predicted that it would only solve about 60% of the problem of uninsured Americans, while nonpartisan sources predicted that it would solve about 40%. So far, reaching that lower prediction of reducing the share of uninsured by 40% is a goal not yet met.
Posted by Timothy Taylor at 7:00 AM