My perhaps old-fashioned view of government is that it exists to carry out tasks on behalf of the citizenry. Although the government needs to hire people to carry out those tasks, government employees are not a purpose of government; instead, they are a cost of carrying out government tasks. I would like the federal bureaucracy to be well-managed by tough cost-cutters, so that as high a proportion as possible of tax money can flow to program beneficiaries, infrastructure needs, and the like, not government paychecks. Thus, I get a queasy feeling from "Sizing Up the Executive Branch," a January 2013 report from the U.S. Office of Personnel Management. 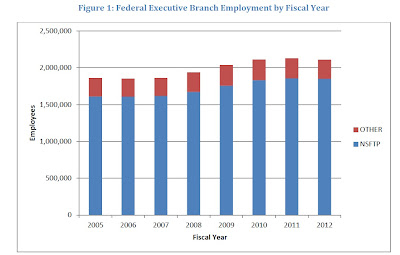 Whenever I see these numbers, the sheer size of federal employment widens my eyes. About 144 million Americans are employed, and more than 1% of them work are civilian employees of the federal government. While unemployment rates have been wrenchingly high for the last five years, government employment has been growing. The number of non-seasonal permanent full-time federal employees rose by about 250,000 from 2006 to 2011--a rise of about 15%--before falling back slightly in 2012.

It's plausible that the Great Recession from 2007-2009 required hiring additional government employees, but now that the end of the recession is four years behind us, will we see the federal civilian employment levels drop substantially--say, by 10% or more? Much of what the government does is manage information about programs and people. Developments in information and communications technology should make it possible to do these tasks more efficiently, if they are implemented by thoughtful managers with a cost-cutting focus. No politician publicly advocated a permanent increase of several hundred thousand federal employees, but it just happened anyway.


If you are interested in discussion of the pay of federal employees relative to their private-sector counterparts, see my February 2012 post "Government Workers: It's Not the Wages, It's the Benefits."