China's wages have risen quickly in the last decade or so, but not quickly enough to keep up with productivity growth. (To put it another way, the share of national income earned by labor is falling in China, as elsewhere.) One factor that has prevented wages from rising even faster is that China has had a vast number of underemployed workers. As China's industry expanded, it could keep drawing more and more of these underemployed workers into its higher-productivity sectors, but the presence of these underemployed workers held the average pay raise below what it would otherwise have been. However, Mitali Das and Papa N’Diaye explain that this dynamic is reaching its end in "The End of Cheap Labor," which appears in the June 2013 issue of Finance and Development. They refer to some of the best-known work of development economist Sir Arthur Lewis, who won the Nobel prize back in 1979, to set up their argument.

"Recent developments in the Chinese labor market seem somewhat contradictory. On the one hand, aggregate wage growth has remained about 15 percent during the past decade, and corporate profits have remained high. Wage growth lags productivity, resulting in rising profits, which suggests that China has not reached the so-called Lewis Turning Point ... at which an economy moves from one with abundant labor to one with labor shortages. At the same time, though, since the financial crisis began, industry has increasingly relocated from the coast to the interior, where the large reserve of rural labor resides. As a result, previously large gaps between the demand for and supply of registered city workers have progressively narrowed, and worker demand for higher wages and better working conditions has risen—suggesting the onset of a structural tightening in the Chinese labor market."


Part of their argument is based on estimates of how many workers in China remain in the low-productivity sectors, and thus could still transfer over to the high-productivity sectors. But such estimates are inevitably a little shaky. They are on stronger ground, it seems to me, in pointing out that "demographics virtually guarantee that China will cross the Lewis Turning Point—almost certainly before 2025." 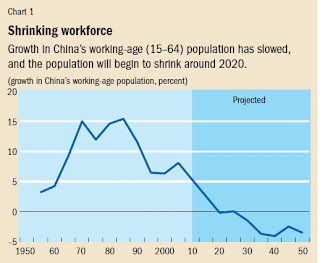 As another illustration, here's a figure showing the total size of China's "core group" of workers age 25-39, compared with the size of the group of those under age 15 and over age 64. In the 1970 and 1980s, the boom in China's working-age population meant that the number of "core workers" outstripped what can be viewed as the "dependent" population for a few years. This pattern of a surge in workers is sometimes called the "demographic dividend." But the "core group" is already starting to shrink in size, and the number of elderly in China is about to take off. China's labor market is clearly evolving toward a very different situation. 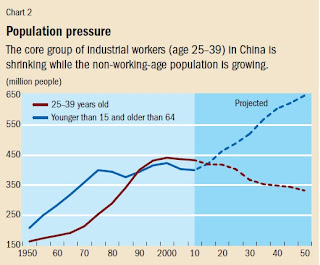 For a more in-depth discussion of these patterns, I recommend a couple of articles from the Fall 2012 issue of the Journal of Economic Perspectives: Hongbin Li, Lei Li, Binzhen Wu, and Yanyan Xiong contributed "The End of Cheap Chinese Labor." and Xin Meng writes on "Labor Market Outcomes and Reforms in China."  (Full disclosure: I'm the managing editor of JEP, so I am predisposed to believe that all of its content is fascinating and well-done. It's also freely available compliments of the American Economic Association.)