When I was getting my feet wet in economics back in the late 1970s and early 1980s, it was conventional wisdom that the share of national income going to labor fluctuated a bit from year to year, but didn't display a rising or falling trend over time. But the stability of labor's share no longer holds true. The Internation Labour Organization discusses some of the data in Chapter 5 if its Global Wage Report 2012/13 on the theme of "Wages and equitable growth." Here, I'll provide a few background charts, and then some thoughts. The ILO report summarizes some of the evidence this way:

"The OECD has observed, for example, that over the period from 1990 to 2009 the share of labour compensation in national income declined in 26 out of 30 developed economies for which data were available, and calculated that the median labour share of national income across these countries fell considerably from 66.1 per cent to 61.7 per cent ... Looking beyond the advanced economies, the ILO World of Work Report 2011 found that the decline in the labour income share was even more pronounced in many emerging and developing countries, with considerable declines in Asia and North Africa and more stable but still declining wage shares in Latin America." 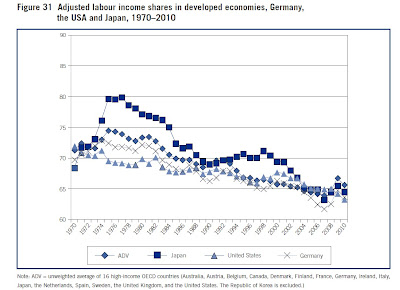 Here's a figure showing patterns for several groups of emerging and developing economies. The longest time series, shown by the darker blue diamonds, is an average for Mexico, South Korea, and Turkey. 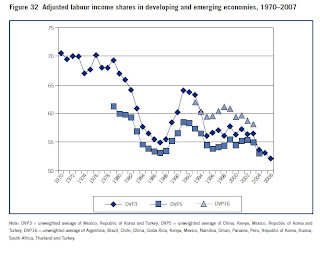 And what about China? Labor share is declining there, too. 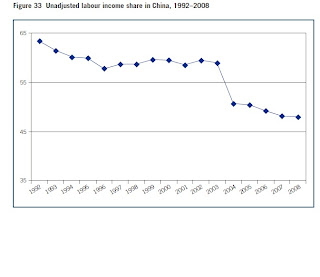 One of the results of the declining labor share of the economy is that as productivity growth increases the size of economies, the amount going to labor is not keeping up. Here's a figure showing the divergence in output and labor income that has opened up since 1999 for developed economies. The results here are weighted by the size of the economy, so the graph largely reflects the experience of the three biggest developed economies: the U.S., Japan, and Germany. 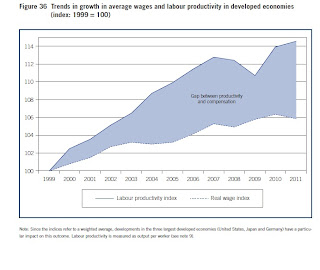 What can be said about this pattern of a declining labor share?

2) The causes are still murky, but one possible answer can be pretty much ruled out. The declining labor share is not caused by a shift from labor-intensive to more capital-intensive industries--because the trend toward a lower labor share is happening across all industries. The difficulty is that the other possible explanations are interrelated and hard to disentangle. They include technological change, globalization, the rise of financial markets, altered labor market institutions , and a decline in the bargaining power of labor. But after all, technological changes in  information and communication technology are part of what has fed globalization, as well as part of what led to a rise of the financial sector. Globalization is part of what has reduced the bargaining power of labor.The ILO report offers some evidence that the rise of the financial sector is a substantial part of the answer. Here's a post from a couple of weeks ago on the growth of the U.S. financial sector.

4) While understanding causes is useful, policies don't always have to address root causes. When someone is hit by a car, you can't reverse the cause, but you can still address the consequences. However, it's worth remembering that the falling share of labor income has been happening all over the world, in countries with a very wide range of different policies and economic institutions. For example, European labor market institutions are often thought of as being more worker-friendly, but they haven't prevented a fall in the labor share of income.