Macroprudential Monetary Policy: What It Is, How it Works

In the old days, like six or seven years ago, one could teach monetary policy at the intro level as consisting of basically one tool: the central bank would lower a particular target interest rates to stimulate the economy out of recessions, and raise that target interest rate when an economy seemed to be overheating. But after the last few years,  even at the intro level, one needs to teach about some additional tools available to monetary authorities. One set of tools goes under the name of "macroprudential policy."

The idea here is that in the past, regulation of financial institutions focused on whether individual companies were making reasonably prudent decisions. A major difficulty with this "microprudential" approach to regulation, as the Great Recession showed, is that it didn't take into account whether the decisions of many financial firms all at once were creating macroeconomic risk. In particular, when the central bank was looking at whether the economy was in sinking into recession or on the verge of inflation, it didn't take into account whether the overall level of credit being extended in the economy was growing very rapidly--like in the housing price bubble from about 2004-2007. I discussed some of the evidence on how boom-and-bust credit cycles are often linked to severe recessions in a March 2012 post on "Leverage and the Business Cycle"  as well as in a February 2013 post on "The Financial Cycle: Theory and Implications."

Macroprudential policy means using regulations to limit boom-and-bust swings of credit. Douglas J. Elliott, Greg Feldberg, and  Andreas Lehnert offer a useful listing of these kinds of policies, how they have been used in the past, and some preliminary evidence on how they have worked in "The History of Cyclical Macroprudential Policy in the United States," written as a working paper in the Finance and Economics Discussion Series published by the Federal Reserve.

One basic but quite useful contribution of the paper is to organize a list of macroprudential policy tools. One set of tools can be used to affect demand for credit, like rules about loan-to-value ratios for those borrowing to buy houses, margin requirements for those buying stocks, the acceptable length of loans for buying houses, and tax policies like the extent to which interest payments can be deductible for tax purposes.  Another set of tools affects the supply of credit, like rules about the interest rates that financial institutions can pay on certain accounts, or the interest rates that they can charge for certain loans, along with rules about how much financial institutions must set aside in reserves or have available as capital, any restrictions on the portfolios that financial institutions can hold, and the aggressiveness of the regulators in enforcing these rules. Here's a list of macroprudential tools, with some examples of their past use. 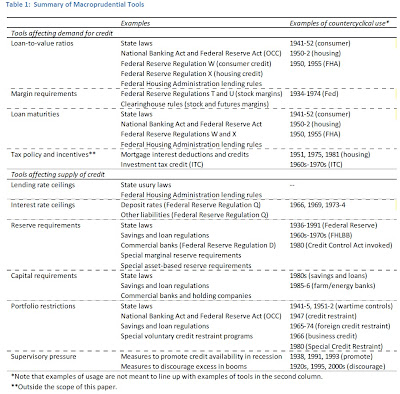 One interesting aspect of these macroprudential policy tools is that many of them are sector-specific. When the central bank thinks of monetary policy as just moving overall interest rates, it constantly faces a dilemma. Is it worth raising interest rates for the entire economy just because there might be a housing bubble? Or just because the stock market seems to be experiencing "irrational exuberance" as in the late 1990s? Macroprudential policy suggests that one might address a housing market credit boom by altering regulations focused on housing markets, or one might address a stock market bubble by altering margin requirements for buying stock.

Do these macroprudential tools work? Elliott, Feldberg, and Lehnert offer some cautious evidence on this point: "In this paper, we use the term “macroprudential tools” to refer to cyclical macroprudential tools aimed at slowing or accelerating credit growth. ... Many of these tools appear to have succeeded in their short-term goals; for example, limiting specific types of bank credit or liability and impacting terms of lending. It is less obvious that they have improved long-term financial stability or, in particular, successfully managed an asset price bubble, and this is fertile ground for future research. Meanwhile, these tools have faced substantial administrative complexities, uneven political
support, and competition from nonbank or other providers of credit outside the set of regulated institutions.  ... Our results to date suggest that macroprudential policies designed to tighten credit
availability do have a notable effect, especially for tools such as underwriting standards, while
macroprudential policies designed to ease credit availability have little effect on debt outstanding."

When the next asset-price bubble or credit boom emerges--and sooner or later, it will--macroprudential tools and how best to use them will become a main focus of public policy discussion.

For more background on the economic analysis behind macroprudential policy, a useful starting point is "A Macroprudential Approach to Financial Regulation," by Samuel G. Hansen, Anil K. Kashyap, and Jeremy C. Stein, which appeared in the Winter 2011 issue of the Journal of Economic Perspectives.  (Full disclosure: My job as Managing Editor of JEP has been paying the household bills since 1986.) Jeremy Stein is now a member of the Federal Reserve Board of Governors, so his thought on the subject are of even greater interest.