One grim piece of news for the U.S. economy in the last few decades has been that the high school graduation rate flattened out around 1970. In a modern economy that depends on skills and brainpower, this is a troubling pattern. Richard J. Murnane considers the evidence and explanations in "U.S. High School Graduation Rates: Patterns and Explanations," in the most recent issue of the Journal of Economic Literature (vol. 51:2, pp. 370–422). The JEL is not freely available on-line, although many in academia will have on-line access through their library or through a personal membership in the American Economic Association. Here's how Murnane sets the stage (footnotes and citations omitted for readability):

"During the first seventy years of the twentieth century, the high school graduation rate of teenagers in the United States rose from 6 percent to 80 percent. A result of this remarkable trend was that, by the late 1960s, the U.S. high school graduation rate ranked first among countries in the Organisation for Economic Co-operation and Development (OECD). The increase in the proportion of the labor force that had graduated from high school was an important force that fueled economic growth and rising incomes during the twentieth century.

Here's a figure showing the patterns. The horizontal axis shows (approximate) birth year. The vertical axis shows the  high school graduation rate for those who were 20-24 at the time. Thus, for example, the upward movement of the graph for those born around 1980 is based on data when those people had reached the age of 20-24. 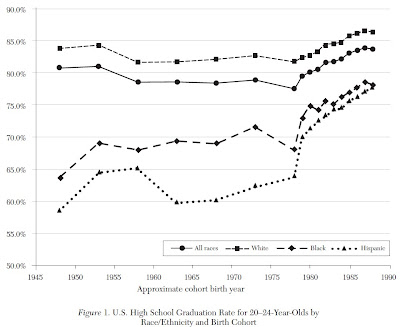 Why the stagnation in high school graduation rates from 1970 up to about 2000? Clearly, it's not because the labor market rewards to getting a high school degree had declined; in fact, the gains from a high school degree had increased. Research has looked at explanations especially relevant at certain places and time, like a boom in demand for Appalachian coal in the 1970s that might have made a high school degree look less value to lower-skilled labor in that area, or how the crack epidemic of the late 1980s and early 1990s altered the expected rewards to finishing high school for a group of young men in certain inner cities, or how the end of certain court-ordered desegregation plans led to higher dropout rates for some at-risk youth.

While all of these explanations have an effect in certain times and places, Murnane suggests a bigger cause: a pattern of increasing high school graduation requirements that started in the 1970s. He writes: "In summary, my interpretation of the evidence is that increases in high school graduation requirements during the last quarter of the twentieth century increased the nonmonetary cost of earning a diploma for students entering high school with weak skills. By so doing, they counteracted the increased financial payoff to a diploma and contributed to the stagnation in graduation
rates over the last decades of the twentieth century."

Why have high school graduation rates apparently risen in the last 10 years or so? Murnane offers some fragmentary evidence that better-prepared ninth graders, expanded preschool programs, and reductions in teen pregnancy may have played a role. But his conclusion is modest: "In summary, there are many hypotheses for why the high school graduation rate of 20–24-year-olds in 2010 is higher than it was in 2000, and why the increase in the graduation rate was particularly large for blacks and Hispanics. However, to date, there is no compelling evidence to explain this encouraging
recent trend."

Murnane offers the useful reminder that voting to raise graduation standards is easy, but raising the quality of education so that a rising share of students can meet those standards is hard. "An assumption implicit in state education policies is that the quality of schooling will improve sufficiently to enable high school graduation rates to rise even as graduation requirements are stiffened. Indeed, many states increased public expenditures on public education to facilitate this improvement. However, it has proven much more difficult to improve school quality than to
legislate increases in graduation requirements."

My own concern about high school graduation requirements is that they are too often focused on getting a student into a college, any college, rather than moving the student toward a career. A high school student in the 25th percentile of a class should still be able to graduate from high school. But while some students who performed poorly in high school will shine in college--and should have an opportunity to do so--it is an unforgiving fact that many students at the bottom of the high school performance distribution will have little interest or aptitude in signing up for more schooling.

In the Spring 2013 issue of the Journal of Economic Perspectives, Julie Berry Cullen, Steven D. Levitt, Erin Robertson, and Sally Sadoff tackle this question: "What Can Be Done To Improve Struggling High Schools?" They point out that the overall high school graduation rates do not show the depth of the problem in a number of inner-city school districts. They conclude: "In spite of decades of well-intentioned efforts targeted at struggling high schools, outcomes today are little improved. A handful of innovative programs have achieved great success on a small scale, but more generally, the economic futures of the students at the bottom of the human capital distribution remain dismal. In our view, expanding access to educational options that focus on life skills and work experience, as opposed to a focus on traditional definitions of academic success, represents the most cost-effective, broadly implementable source of improvements for this group." (Full disclosure: I've been the Managing Editor of the Journal of Economic Perspectives for the past 27 years, so I am predisposed to find all of the articles intriguing. All JEP articles back to the first issue in 1987 are freely available on-line courtesy of the American Economic Association.)