A Legal Right to Paid Vacation?

From an American perspective,  a legal right to paid vacation sounds like a peculiar and impractical hypothetical. For other high-income countries in the world, it's the law. Rebecca Ray, Milla Sanes, and John Schmitt lay out the facts in "No-Vacation Nation Revisited," written for the Center for Economic and Policy Research.

The dark-blue columns show the statutory minimum number of paid vacation days. The light-blue lines show national paid holidays. The zero at the far-right-side for either one is the United States. 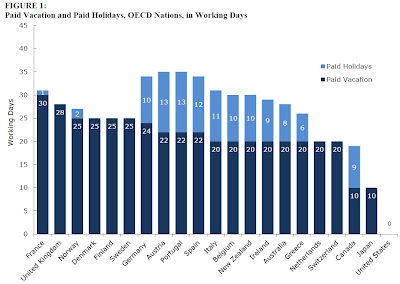 Here is  table showing the numbers behind the figure. 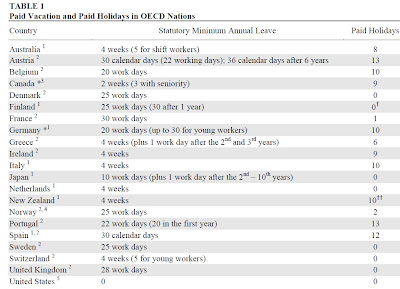 Ray, Sanes, and Schmitt sum it up this way:

"The United States is the only advanced economy in the world that does not guarantee its workers paid vacation. European countries establish legal rights to at least 20 days of paid vacation per year, with legal requirements of 25 and even 30 or more days in some countries. Australia and New Zealand both require employers to grant at least 20 vacation days per year; Canada and Japan mandate at least 10 paid days off. The gap between paid time off in the United States and the rest of the world is even larger if we include legally mandated paid holidays, where the United States offers none, but most of the rest of the world's rich countries offer at least six paid holidays per year."


In my Principles of Economics textbook, I include a little table comparing average annual hours worked across countries, based on OECD data. Here's the figure with 2011 data (with thanks to Dianna Amasino): 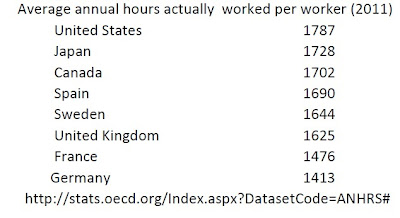 Of course, more vacation time is not a free lunch. One reason why per capita GDP is lower in these other high income countries than in the United States is the average U.S. worker spends more hours on the job. There are political economy issues, too: it makes my economist's skin crawl to imagine Congress and a president happily handing out paid vacation days to all, with little concern for the tradeoffs. But on the other side, it's also true that many of the rules that govern employment, and vacation time, are based in tradition and an implicit agreement about what a "job" will mean, not the result of a free-form multidimensional negotiation between employers and potential employees. It can be quite difficult for an individual, especially one seeking a low-skilled job, to negotiate even for flexible hours, much less for paid vacation or company-paid health insurance.

As an American, the idea of a legal right to paid vacation is gap in hours worked is outside my personal experience. I am honestly not sure that I would be emotionally comfortable cutting my workload by, say, six or seven weeks per year. It feels to me as if such a change would reshape my personal relationship to work in ways that I cannot really anticipate. But I wouldn't mind seeing the federal government add a few more national holidays. Most employers would treat them as vacation, and accommodate without much trouble. School districts would do the same, allowing families to plan some time together. And many workers who don't get the day off would at least get a pay boost if they end up working on a federal holiday.