A Fundamental Shift in the Nature of Trade Agreements

Controversy over agreements that seek to encourage free trade has been going on for decades. But the nature of the underlying trade agreements has fundamentally shifted. The old trade agenda under first the GATT and then its successor the World Trade Organization was focused on reducing tariffs and other trade barriers. The new generation of trade agreements are about assuring that interlocking webs of production that cross international borders will be enabled to function. Richard Baldwin explores the change in "The World Trade Organization and the Future of Multilateralism," published in the Winter 2016 issue of the Journal of Economic Perspectives.  Here's a taste of his theme:


"[T]he rules and procedures of the WTO were designed for a global economy in which made-here–sold-there goods moved across national borders. But the rapid rising of offshoring from high-technology nations to low-wage nations has created a new type of international commerce. In essence, the flows of goods, services, investment, training, and know-how that used to move inside or between advanced-nation factories have now become part of international commerce. For this sort of offshoring-linked international commerce, the trade rules that matter are less about tariffs and more about protection of investments and intellectual property, along with legal and regulatory steps to assure that the two-way flows of goods, services, investment, and people will not be impeded. It’s possible to imagine a hypothetical WTO that would incorporate these rules. But in practice, the rules are being written in a series of regional and megaregional agreements like the Trans-Pacific Partnership (TPP) and Transatlantic Trade and Investment Partnership (TTIP) between the United States and the European Union. The most likely outcome for the future governance of international trade  is a two-pillar structure in which the WTO continues to govern with its 1994-era rules while the new rules for international production networks, or “global value chains,” are set by a decentralized process of sometimes overlapping and inconsistent megaregional agreements."

Let's unpack these dynamics a bit. Baldwin argues that the rounds of international trade talks starting with the GATT in 1946 displayed what he calls "juggernaut" dynamics. Before the multilateral trade talks, there wasn't much reason for exporters in a country to care about whether the country imposed tariffs on imports. But the multilateral trade talks shifted the political balance, because exporters realized that in order to get lower tariffs in their foreign markets, their own country would need to reduce its tariffs, too. Moreover, each time tariffs were reduced, it tended to weaken firms and industries that faced tough import competition, while benefiting export-oriented firms. Thus, export-oriented firms were in a stronger position to advocate for future tariff cuts as well.

But by the 1990s, there was a rise in global supply chains that crossed international borders. Many emerging markets figured out pretty quickly that if they wanted to be part of global supply chains, they not only needed to reduce their tariffs, but they also needed to implement rules about protection of investment and intellectual property, as well as pursuing the "trade facilitation" agenda of making it easier for goods to move across borders. Literally hundreds of these regional trade agreements hae already been signed, and these were not "shallow" agreements focused on reducing tariffs a bit, but "deep" agreements that got way down into the nitty-gritty of facilitating cross-border trade.

Here are a couple of figures from  Baldwin to illustrate the point. The bars in the left-hand figure show the number new regional trade agreements signed each year, and the blue line show the typicaly number of "deep" provisions in these treaties. The right-hand figure shows the number of bilateral investment treaties signed each year--there was clearly a boom in such treaties from the late 1990s into the early 2000s. 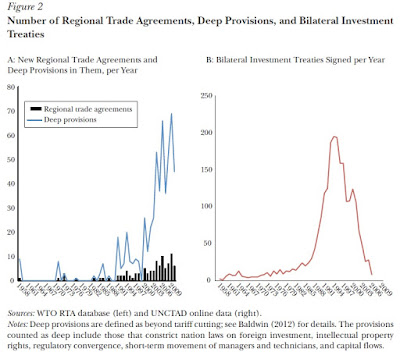 The controversial megaregional trade agreements now in the news are mostly about combining and standardizing provisions that are pretty much already incorporated in these hundreds of regional agreements. As Baldwin writes; "The thousands of bilateral investment treaties, for instance, are not all that different, and so network externalities could be realized by melding them together. The emergence of so-called megaregionals like the Trans-Pacific Partnership and Trans-Atlantic Trade and Investment Partnership should be thought of as partial multilateralization of existing deep disciplines by sub-groups of WTO members who are deeply involved in offshoring and global value chains."

My sense is that this fundamental shift in trade agreements from "shallow" to "deep" is part of what drives the controversy surrounding them. The new generation of trade agreements aren't just about reducing tariffs or trade barriers as traditionally understood; instead, they are full of very specific rules that seek to harmonize and facilitate business flows across international borders. There is an uncomfortable sense that in the process of negotiating the details, there are too many times when juicy little plums are included for favored special interests. The fundamental economic arguments for the overall benefits of free trade, even though it is a disruptive force, have to be re-interpreted through a haze of fine print in such cases.

Baldwin sees some difficult issues emerging with a two-track system of wold trade agreements. He writes:


"The megaregionals like the Trans-Pacific Partnership and Trans-Atlantic Trade and Investment Partnership, however, are not a good substitute for multilateralization inside the WTO. They will create an international trading system marked by fragmentation (because they are not harmonized among themselves) and exclusion (because emerging trade giants like China and India are not members now and may never be). Whatever the conceptual merits of moving the megaregionals into the WTO, I have argued elsewhere that the actual WTO does not seem well-suited to the task. ...

"What all this suggests is that world trade governance is heading towards a two-pillar system. The first pillar, the WTO, continues to govern traditional trade as it has done since it was founded in 1995. The second pillar is a system where disciplines on trade in intermediate goods and services, investment and intellectual property protection, capital flows, and the movement of key personnel are multilateralised in megaregionals. China and certain other large emerging markets may have enough economic clout to counter their exclusion from the current megaregionals. Live and let live within this two-pillar system is a very likely outcome."

(Full disclosure: I've worked as the Managing Editor of the Journal of Economic Perspectives, where Baldwin's article appeared, for the last 30 years.)