The Next Big M&A Boom is Here

The conditions have seemed ripe for a boom in mergers and acquisitions for a few years now. Lots of companies are sitting on piles of cash. Interest rates are low,  so borrowing money to complete a deal is cheap. Whether in the national or the global economy, production chains are being reshaped by waves of new technology, outsourcing, and in-sourcing. Such economic shakeups can affect the shape of firms and their perceptions of whether a merger or acquisition makes sense. But in 2015, many of these forces came together and the next big mergers and acquisitions boom seems to have arrived.

Here's a comment and figure taken from Congressional testimony on March 9, 2016, by William Baer, who is Assistant Attorney General at the Antitrust Division of the U.S. Department of Justice, before the US Senate (more specifically, before the Subcommittee on Antitrust, Competition Policy and Consumer Rights, of the Committee on the Judiciary). Baer said:


"The merger wave is back. Big time. Global merger and acquisition volume has reached historic levels in terms of number, size and complexity. In FY 2015, 67 proposed mergers were valued at more than $10 billion. That is more than double the annual volume in 2014. Last year 280 deals were worth more than $1 billion, nearly double the number from FY 2010." 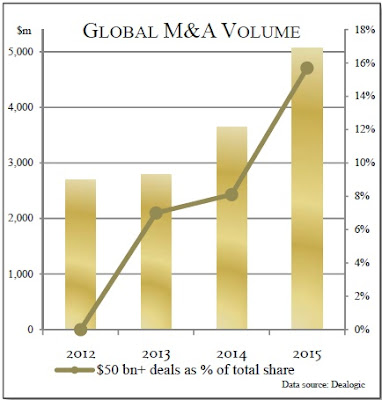 The global volume of mergers and acquisitions in 2015 exceeded $5 trillion, about twice as high ast the total volume in 2013. According to Dealogic, about one-half of the global M&A deals in 2015 (by dollar value) targeted US firms, and about one-quarter targeted Asian Pacific firms. Here's a list of the big M&A deals announced in 2015--many of which are still pending.

There's of course nothing intrinsically wrong with merger and acquisition deals. Sometimes, it's just a way for companies to evolve and grow. That said, when the level of such deals hits historically high levels, and with historically large sizes, it's reasonable to raise some questions.

For example, in past merger waves a common finding in the academic research is that on average such deals turns out to be a gain for the shareholders of the firm that gets acquired, but on average it's neutral or even a small loss for shareholders of the firm doing the acquiring. This pattern suggests that the executives of firms which acquire other  firms are often too optimistic about the gains that will result. A few years from now, we'll have a sense as to whether that common pattern continued through the current wave of deals.

Another issue involves the appropriate actions of antitrust regulators in the face of a merger wave. In Baer's testimony, he shows that the actions of US antitrust regulators did increase in 2015--as one would expect given the rise in the number and size of deals proposed. But even with a rise in antitrust enforcement, it's still a tiny minority of M&A deals that are challenged, presumably those representing what the regulators think are the most clear-cut or egregious cases. The antitrust authorities often enter into negotiations with the companies who are proposing a deal, which result in various tweaks and adjustments to the deal--like an agreement to sell off some parts of the merged company to preserve a degree of competition. But Baer's testimony also hints that in the past, these adjustments to M&A deals may not have worked to protect consumers. He said:


"When we find a merger between rivals that risks decreasing competition in one or more markets, we are invariably urged to accept some form of settlement, typically modest asset divestitures and sometimes conduct commitments or supply agreements. We thoroughly review every offer to settle, but we have learned to be skeptical of settlement offers consisting of behavioral remedies or asset divestitures that only partially remedy the likely harm. We will not settle Clayton Act violations unless we have a high degree of confidence that a remedy will fully protect consumers from anticompetitive harm both today and tomorrow. In doing so, we are guided by the Clayton Act and the Supreme Court, which instruct us to not only stop imminent anticompetitive effects, but
also to be forward-looking and arrest potential restraints on competition “in their incipiency.” Settlements need to preserve the status quo ante in markets where there is a risk of competitive harm. Where complex transactions pose antitrust risks in multiple markets, our confidence that Rube Goldberg settlements will preserve competition diminishes. Consumers should not have to bear the risks that a complex settlement may not succeed. If a transaction simply cannot be fixed, then we will not hesitate to challenge it."

But with the current wave of mergers and acquisitions, the big issue to me is not so much what is legal, but what it reveals about the priorities and perceptions of top executives of these companies. A huge M&A deal is a huge commitment of the time of executives, not just in negotiating the deal, but then in following up and integrating various parts of the two companies.

In that spirit, I find it discouraging that the top executives at Pfizer apparently believe that the best focus of their time and energy at present isn't about developing new pharmaceuticals in-house, but rather to do a tax-inversion deal with the Irish firm Allergan, so that Pfizer can pay the lower Irish corporate tax rate instead. I find it discouraging that the Belgian firm Anheuser-Busch Inbev and the US firm SABMiller, both of which are the result of earlier large-scale mergers, apparently believe that the most important corporate priority isn't to focus on selling fizzy water to their customers, but instead to do yet another merger. The same discouragement applies to most of the mergers on the top 10 list above.

The merger wave means that top executives across a wide range of industries--pharmaceuticals, oil and gas, food and beverages, chemicals, technology, telecom, health care, and others--are all deciding that the most productive use of their time and energy is to devote a historically enormous amount of capital is to merge with or acquire other existing firms. I'm sure every one of these firms can offer some flashy case about the "synergies" from the mergers, and probably a few of those cases will even turn out to be correct. But I find myself wondering about the potential gains to productivity and consumers if, instead of pursuing mergers, these top executives focused the same time and energy and financial resources on building the capabilities of their own workforce, innovating in their product areas, and competing with the other firms in their industries.