Is the Essence of Globalization Shifting?

Since the Great Recession of 2007-2009, a number of the standard economic measures of globalization have declined--flow of goods, services, and finance. But other aspects of globalization are on the rise, like communication and the ability of small firms and individuals to participate in international markets. The McKinsey Global Institute explores these changes in a March 2016 report  Digital globalization: The new era of global flows, written by a team led by James Manyika, Susan Lund, Jacques Bughin, Jonathan Woetzel, Kalin Stamenov, and Dhruv Dhingra.

Here's a rough measure of the recent drop in standard measures of globalization. The bars show measures of international flows of goods services, and finance measured in trillions of dollars. The line shows the total flows as a share of global GDP. 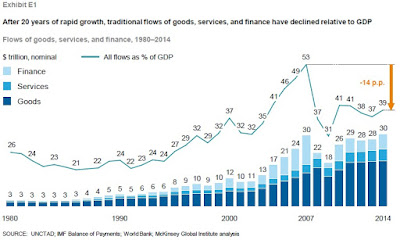 Of course, it's easy to come up with reasons why this slowdown in standard measures of globalization is just a short-term blip; the recession slowed down trade, the fall in the price of oil and other commodities reduced the value of trade, China's growth is slower, and so on. But the report argues that some more fundamental factors are shifting:

"Yet there is more behind the slowdown in global goods trade than a commodities cycle. Trade in manufactured goods has also been flat to declining for both finished goods and intermediate inputs. Global container shipping volumes grew by 7.8 percent from 2000 to 2005, but from 2011 to 2014, growth was markedly slower, at only 2.8 percent. Multiple cyclical factors have sapped momentum in the trade of manufactured goods. Many of the world’s major economies—notably China, Europe, and Japan—have been experiencing slowdowns. China, for example, posted almost 18 percent annual growth in both imports and exports from 2000 to 2011. But since then its export growth has slowed to 4.6 percent, and imports have actually shrunk. However, there may be structural reasons in global manufacturing that explain decelerating growth in traded goods. Our analysis find that global consumption growth is outpacing trade growth for some types of finished goods, such as automobiles, pharmaceuticals, fertilizers, and plastic and rubber goods. This indicates that more production is happening in the countries where the good is consumed. This may reflect the “reshoring” of some manufacturing to advanced economies as well as increasing consumption in emerging markets where these goods are produced."

The McKinsey report argues that the form of globalization is shifting. Much of the discussion emphasizes international flows of data and information crossing borders, but there is also some emphasis on international flows of people at tourists, migrants, and students, as well as changes in e-commerce. For example, the report states:

"The world has become more intricately connected than ever before. Back in 1990, the total value of global flows of goods, services, and finance amounted to $5 trillion, or 24 percent of world GDP. There were some 435 million international tourist arrivals, and the public Internet was in its infancy. Fast forward to 2014: some $30 trillion worth of goods, services, and finance, equivalent to 39 percent of GDP, was exchanged across the world’s borders. International tourist arrivals soared above 1.1 billion. And the Internet is now a global network instantly connecting billions of people and countless companies around the world. Flows of physical goods and finance were the hallmarks of the 20th-century global economy, but today those flows have flattened or declined. Twenty-first-century globalization is increasingly defined by flows of data and information. This phenomenon now underpins virtually all cross-border transactions within traditional flows while simultaneously transmitting a valuable stream of ideas and innovation around the world.

"Our econometric research indicates that global flows of goods, foreign direct investment, and data have increased current global GDP by roughly 10 percent compared to what would have occurred in a world without any flows. This value was equivalent to $7.8 trillion in 2014 alone. Data flows account for $2.8 trillion of this effect, exerting a larger impact on growth than traditional goods flows. This is a remarkable development given that the world’s trade networks have developed over centuries but cross-border data flows were nascent just 15 years ago."

What do some of these data flows look like?


Cross-border data flows are the hallmarks of 21st-century globalization. Not only do they transmit valuable streams of information and ideas in their own right, but they also enable other flows of goods, services, finance, and people. Virtually every type of cross-border transaction now has a digital component. ...

Approximately 12 percent of the global goods trade is conducted via international e‑commerce, with much of it driven by platforms such as Alibaba, Amazon, eBay, Flipkart, and Rakuten. Beyond e‑commerce, digital platforms for both traditional employment and freelance assignments are beginning to create a more global labor market. Some 50 percent of the world’s traded services are already digitized. Digitization also enables instantaneous exchanges of virtual goods. E-books, apps, online games, MP3 music files and streaming services, software, and cloud computing services can all be transmitted to customers anywhere in the world there is an Internet connection. Many major media websites are shifting from building national audiences to global ones; a range of publications, including The Guardian, Vogue, BBC, and BuzzFeed, attract more than half of their online traffic from foreign countries. By expanding its business model from mailing DVDs to selling subscriptions for online streaming, Netflix has dramatically broadened its international reach to more than 190 countries. While media, music, books, and games represent the first wave of digital trade, 3D printing could eventually expand digital commerce to many more product categories.

Finally, “digital wrappers” are digital add-ons that enable and raise the value of other types of flows. Logistics firms, for example, use sensors, data, and software to track physical shipments, reducing losses in transit and enabling more valuable merchandise to be shipped and insured. Online user-generated reviews and ratings give many individuals the comfort level needed to make cross-border transactions, whether they are buying a consumer product on Amazon or booking a hotel room halfway around the world on Airbnb, Agoda, or TripAdvisor. ...

Small and medium-sized enterprises (SMEs) worldwide are using the “plug-and-play” infrastructure of Internet platforms to put themselves in front of an enormous global customer base and become exporters. Amazon, for instance, now hosts some two million third-party sellers. In countries around the world, the share of SMEs that export is sharply higher on eBay than among offline businesses of comparable size. PayPal enables crossborder transactions by acting as an intermediary for SMEs and their customers. Participants from emerging economies are senders or receivers in 68 percent of cross-border PayPal transactions. Microenterprises and projects in need of capital can turn to platforms such as Kickstarter, where nearly 3.3 million people representing nearly all countries made pledges in 2014. Facebook estimates that 50 million SMEs are on its platform, up from 25 million in 2013; on average 30 percent of their fans are from other countries. To put this number in perspective, consider that the World Bank estimated there were 125 million SMEs worldwide in 2010. For small businesses in the developing world, digital platforms are a way to overcome constraints in their local markets.

As one vivid example of international data flows from the report, the number of people on the most popular online social media platforms exceeds the population of most countries--showing that these platforms are crossing lots of international borders. 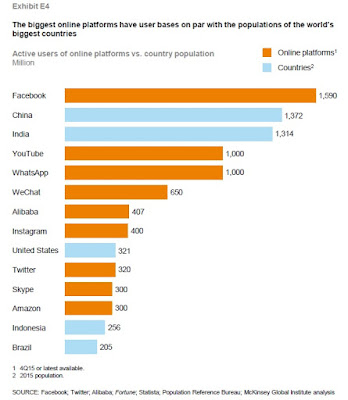 Although the report doesn't especially emphasize how flows of people have increased, I found this graphic interesting. Over the last few decades, the change in the number of migrants and refugees has largely reflected growth of the overall world population. But many more people are having an shorter-term international experience, either as students or as travelers. 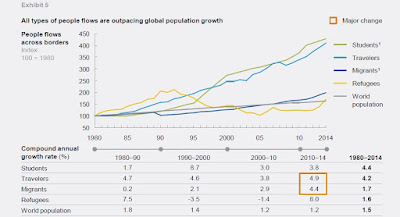 What's the bottom line on these changes? It's already true that international trade in goods has shifted away from being about final products, and instead become more a matter of intermediate products being shipped along a global production chain. Now, information in all its forms (design, marketing, managerial expertise) is becoming a bigger share of the final value of many physical products.  Moreover, a wired world will be more able able to buy and sell digital products. New technologies like 3D printing will make it easier to produce many physical products on-site, wherever they are needed, by shipping only the necessary software, rather than the product itself. The greater ease and cheapness of international communication will presumably strengthen many person-to-person cross-border ties, which is not just a matter of broadening one's social life, but also means a greater ability to manage business and economic relationships over distance.

It's interesting to speculate on how these shift in globalization, as it percolate through economies around the world, will affect attitudes about globalization. Imagine a situation in which globalization is less about big companies shipping cars and steel and computers, and more about small and medium companies shipping non-standard products or services. And imagine a situation in which globalization becomes less faceless, because it will be so much easier to communicate with those in other countries--as well as so much more common to visit in person as a student or tourist. Changes in how globalization manifests itself seems sure to shake up how economists, and everyone else, view its costs and benefits.