It's well-known that lots of state and local pension funds have "unfunded liabilities," which means that what they have already promised to pay retirees is more than what they are likely to have in the pension fund when the payments come due (based on what's currently in the pension fund and assuming a rate of return which is often pretty optimistic). What's not as well-known is that over the last few decades, a number of state and local governments missed a golden opportunity to run their pension funds sensibly. The Council of Economic Advisers lays out some of the evidence in its the 2016 Economic Report of the President. The report notes:


Unfunded pension obligations place a heavy burden on State and local government finances. The size of these unfunded pension liabilities relative to State and local receipts ballooned immediately after the recession and remains elevated at a level that was about 65 percent of a year’s revenue in the first three quarters of 2015 ... 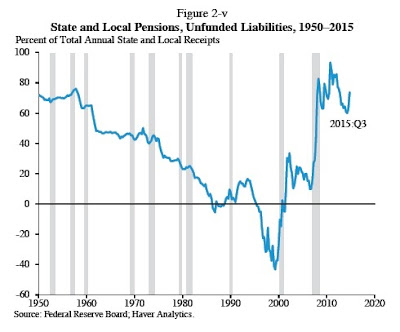 The excellent position of state and local pension funds in the late 1990s was in some ways misleading, since it was based on the dot-com stock market boom that turned south around the year 2000. But if one looks back over the last 30 years, stock markets overall show a dramatic rise. The S&P 500 index, for example, rose from about 250 in 1986 to roughly 2,000 over a 30-year period. That's a nominal rise of about 7% per year, and adding the returns to shareholders from dividends paid out by firms would make the total return over this time a few percentage points higher. There's certainly no guarantee that stock markets in next 30 years will perform as well as they have over the last 30. 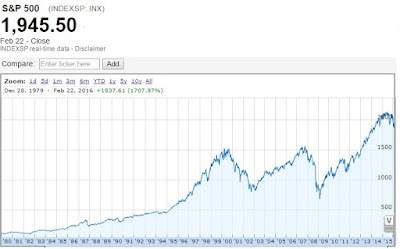 In short, the reason why the unfunded liabilities of state and local pension funds are so much higher in 2016 than 30 years ago isn't because the overall stock market performed poorly. Instead, it's a grim story of mistiming the moves in the market (rather than just being steadily invested throughout), trying out alternative investments that didn't pan out, not putting enough money aside in the first place, and overpromising what benefits could be paid. I have a lot of sympathy for the retirees and soon-to-be retirees who were depending on a pension from a state or local government, and are now finding that the money isn't there to pay for the promises. But when blame gets assessed for this grim situation, it's worth remembering that those who have been making the decisions about state and local pensions had a very favorable situation 30 years ago--that is, unfunded liabilities near zero, with a period of strong stock market growth over the next three decades coming up--and they messed it up.