The most notable success of the Patient Protection and Affordable Care Act of 2010 is that it has reduced the number of Americans without health insurance. There's no magic in how this has happened: it's just a matter of spending an extra $110 billion.  The Congressional Budget Office lays out the costs in its March 2016 report, "Federal Subsidies for Health Insurance Coverage for People Under Age 65: 2016 to 2026."  CBO writes:

To separate the effects of the ACA’s [Affordable Care Act's] coverage provisions from those broader estimates, CBO and JCT [Joint Committee on Taxation] compared their current projections with estimates of what would have occurred if the ACA had never been enacted. In 2016, those provisions are estimated to reduce the number of uninsured people by 22 million and to result in a net cost to the federal government of $110 billion. ... Those estimates address only the insurance coverage provisions of the ACA, which do not generate all of the law’s budgetary effects. Many other provisions—such as various tax provisions that increase revenues and reductions in Medicare payments to hospitals, to other providers of care, and to private insurance plans delivering Medicare’s
benefits—are, on net, expected to reduce budget deficits.

Dividing the $110 billion in additional spending by 22 million more people with health insurance works out to about $5,000 per person. For comparison, although the comparison should be taken only as rough and not as apples-to-apples, Medicaid spending is about $5,800 per enrollee. There's never been any secret that if the US was willing to spend an extra $100 billion or more, it could subsidize health insurance for a lot more people. 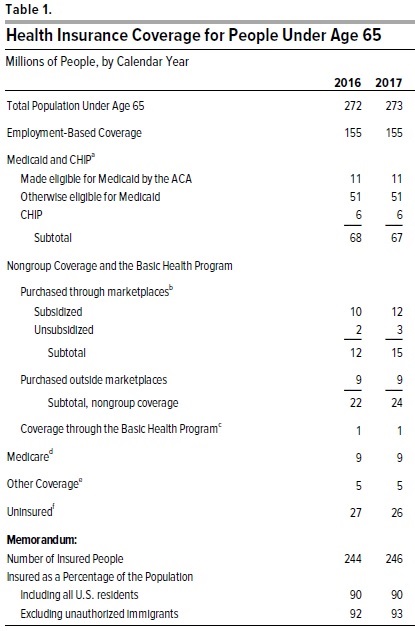 Here's part of a table from the CBO report showing federal subsidies for  health insurance coverage. The two main categories in which the Patient Protection and Affordable Care Act of 2010 raised subsidies for health insurance are $64 billion for expanding Medicaid coverage, and $43 billion in subsidies for those with lower income levels to purchase insurance  though the "marketplaces" (which seems to be the new name for what have often been called the "exchanges). 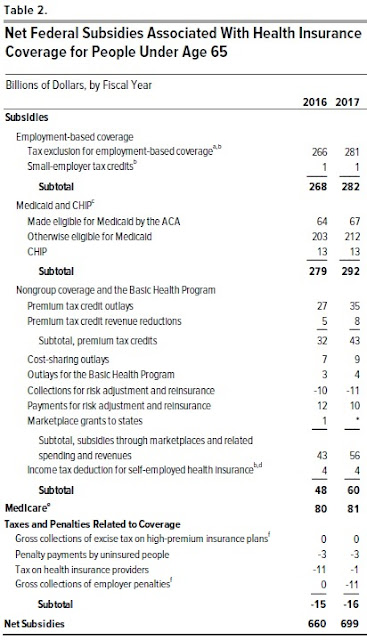 2)  Overall, I'm personally in favor of spending an extra $110 billion to provide health insurance coverage for 22 million more people. Sure, there's part of me that wonders if some of those people might have preferred getting health insurance that was more bare-bones and cheaper, and instead getting some of that $5,000 per person subsidy in the form of income that could have been spent in other ways. But that political choice wasn't available.

3) The main issue for me isn't the extra $110 billion in spending, but rather how that additional spending was designed and implemented, and how it interacts with the health insurance and health care markets as a whole. If the fundamental goal of the act was to spend and extra $110 billion and subsidize insurance for 22 million more Americans, the law could have been a lot simpler and less invasive.

Posted by Timothy Taylor at 9:13 AM