Stock Options: A Theory of Compensation and Income Inequality at the Top

As background for this theory, it's useful to review a few main facts and patterns about executive compensation and income inequality. For starters, here's a figure showing a rise in executive compensation as a multiple of the salary of a typical worker (taken from a January 2016 Credit Suisse report on trends in corporate governance). The multiple rises somewhat from the mid-1970s up through the early 1990s, but then rather abruptly takes off and fluctuates at a higher level after that point.

For a longer-term view going back to the 1940s, here's a figure showing the historical change in median pay levels of top executives at large US companies  from Carola Frydman and Raven E. Saks in their article "Executive Compensation: A New View from a Long-Term Perspective, 1936-2005," which appeared in the Review of Financial Studies (23: 5, May 2010, pp. 2099-2138). 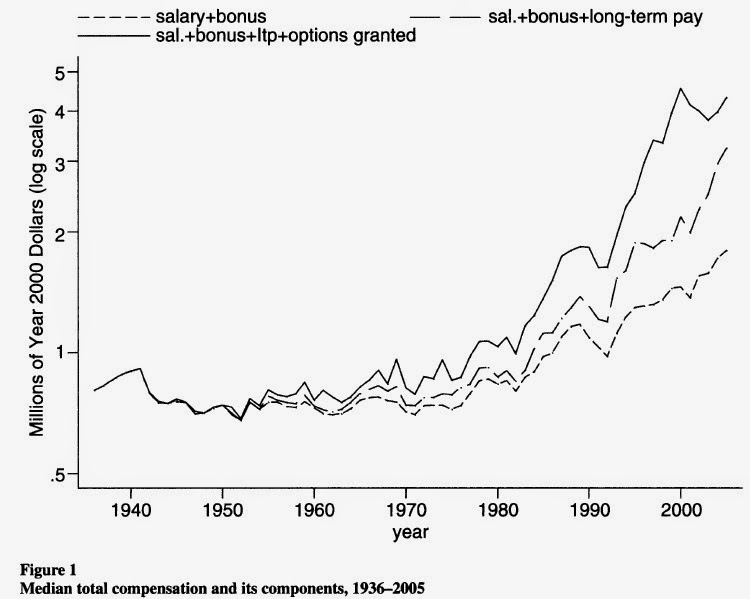 From the 1930s up through about 1980, most executive pay was in the form of salary-plus-bonus. But in the 1980s, long-term pay and stock options began to play a much larger role. Clearly, much of the rise in executive salaries can be traced to new categories of executive compensation that were relatively small a few decades ago: "long-term pay" and stock options.

These rises in executive pay have a very similar timing to the rise in income inequality at the highest levels. Here are a couple of illustrative figures about inequality at the top income levels, based on tax return data, from "Striking it Richer: The Evolution of Top Incomes in the United States (Updated with 2014 preliminary estimates)," by Emmanuel Saez in a working paper dated June 25, 2015. First, this figure shows the share of total income received by the top 1%, the top 1%-5%, and the top 5%-10%. Notice that while there's a rise in the share of total income received by all three groups over time, the rise for the top 1% is by far the largest--and of course, the top 1% also by definition has fewer people than the other two groups. Also, while the increase for the top 1% dates back to the 1970s, there's an especially sharp for the share of income received by the top 1% in the early to mid-1990s. Since then, the share going to the top 1% is volatile, but doesn't show much upward trend. 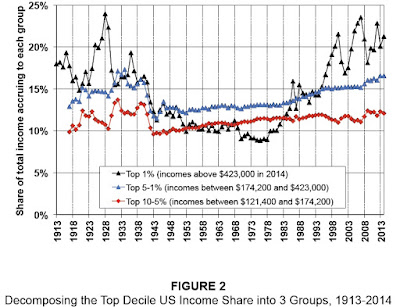 And here's a figure showing the share of total income received at the very top, by the .01%--in 2014, for example, this group had more than 9.75 million in income. Again, there's an increase for this group in the 1980s, but the really large jump comes in the 1990s. Again, there is volatility since the late 1990s, but not much of an upward trend. 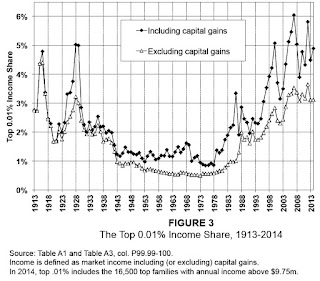 So what happened back in the early 1990s that would have caused executive compensation and the use of stock options to take off? A common explanation traces the causes back to the 1992 election when Bill Clinton made high executive pay a campaign issue. In 1993, a law was passed placing a $1 million cap on salaries for a number of top corporate executives. However, the cap was only about salaries, not about pay that was in some way linked to performance. In response to this law, there was a large-scale shift to paying top executives with stock options. The stock market more-or-less tripled in value during the five years from late 1994 to late 1999, and so those who had stock options did very well indeed. Christopher Cox, who had been a congressman back in 1993 but then had become chairman of the Securities and Exchange Commission, testified before Congress in 2006:


"[O]ne of the most significant reasons that non-salary forms of compensation have ballooned since the early 1990s is the $1 million legislative cap on salaries for certain top public company executives that was added to the Internal Revenue Code in 1993. As a Member of Congress at the time, I well remember that the stated purpose was to control the rate of growth in CEO pay. With complete hindsight, we can now all agree that this purpose was not achieved. Indeed, this tax law change deserves pride of place in the Museum of Unintended Consequences."

Just to be clear, I'm not arguing that stock options for top executives is the only factor affecting inequality of compensation. I suspect that what economists call skill-biased technical change--that is, the way in which information technology allowed some of those with high skills to add enormously to their productivity--also made a difference. The rise of globalization greatly increased the opportunities for some folks with certain skills, even as it diminished opportunities for others. But if the focus is on the rise in incomes at the very top, this change mirrors very closely in time the rise in stock options. In addition, my guess is that  when the pay of top executives skyrocketed in the 1990s, it reset expectations about it was "reasonable" to pay top employees in many settings, including at law firms, financial firms, and even in top academic jobs. And remember, the widespread rise of stock options largely arose out of an attempt to pass a law that would limit CEO pay!

The obvious argument for stock options, for many years now, has been that they created a link between executive pay and corporate shareholders. There's a good argument for incentive pay for top executives, so that they are willing to take tough decisions when needed and not just sit around on their paychecks. But the particular kind of incentives provided by stock options often was not well targeted. In the statistical literature on baseball players, there is a concept of a "replacement player"--that is, an average or "replacement" player that any team can get at any time. Baseball statheads then calculate VORP, or "value over replacement player." In a similar spirit, just running an average company and having average results doesn't seem as if it deserves special bonuses. High performance occurs when an executive performs better than a replacement of average quality--for example, if the firm is outperforming competitors, regardless of whether the overall market is up or down.

In this sense, stock options were often poorly designed to create a link with stock market performance. For some companies, handing out stock options apparently felt like paying with free money. Executives made money with stock options when the market as a whole went up in the 1990s, even if their company just went up less than average for the market or for their industry. There were concerns that stock options can encourage excessive risk-taking--for example, in the financial sector---because they offered a big upside for executives who did well, but no downside losses for those who did poorly. There were concerns that stock options encouraged steps to juice up the stock price--say, through having a company buy back its own stock or through empire-building mergers and acquisitions--rather than focusing on growing the company for the future. There was a scandal back in 2006 (when Cox was testifying before Congress) about how companies backdated" options--that is, they falsely claimed that stock options had been granted to executives in the past, thus allowing the executives to cash in on increases in the stock price since that time. The amount of compensation actually being received by executives through stock options was often fairly opaque, at least to those outside the executive suites.

Whether or not you buy my argument about why the use of stock options became so widespread and my skepticism about their design, it's interesting to note that they seem to be in decline. Here's some evidence from "Measuring CEO Compensation," a March 2016 "Economic Brief" written by Arantxa Jarque and David A. Price of the Federal Reserve Bank of Richmond. The green bars shows the share of large firms using stock options, but not grants of restricted stock. ("Restricted" stock means that it is not actually given to the executive certain targets are met, which can include an executive staying with a company for a certain time, or the company meeting certain financial or product development targets.) The purple bars show the rising share of companies using only restricted stock, and not stock options, while the red bars show companies using both. The trend is pretty clear: stock options have become much less dominant. 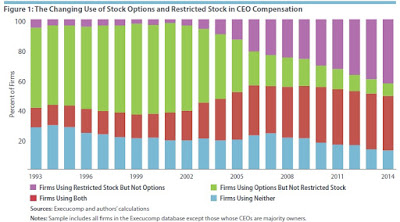 As Jarque and Price write:

In the 2000s, the data also show a marked shift from stock options to restricted stock grants or a combination of the two; this timing is consistent with firms reacting to policy changes unfavorable to options during that period. Among these changes were a provision of the Sarbanes-Oxley Act of 2002 requiring faster disclosure of option grants and the adoption in 2006 of accounting standards that mandated the treatment of option grants as expenses.

Just to reiterate the essence of their final sentence, stock options were popular when disclosure could be slower and the company didn't need to treat such payments as expenses (!). When those factors changed, apparently other methods of aligning the incentives of executives and shareholders, like grants of restricted stock linked to specific performance targets, became attractive.

If this theory about a strong connection from the widespread rise of stock options in the 1990s to the rise in income inequality at the very top contains some measure of truth, then a few insights follow. The especially sharp rise in income inequality at the top should be a more-or-less one-time event. As noted above, the rise in executive pay and in share of incomes going to the top 1% or .01% jumped in the 1990s, and while it has fluctuated since then, the overall trend doesn't seem to be up since the late 1990s. Moreover, this shift to greater inequality at the very top seems unlikely to be repeated. There's a shift away from stock options toward restricted stock; moreover, the stock market doesn't seem likely to triple in the next five years, as it did from late 1994 through late 1990s. Finally, there's probably a lesson in the fact that when executive pay was highly visible to outsiders, in the form of salary plus cash bonus, compensation for top executives didn't rise much, but as the form of compensation became more opaque with stock options and grants of restricted stock that were often based on a number of nonpublic underlying conditions, executive pay rose substantially.