If someone who is selling or renting homes faces two people who are similar except for their race or ethnicity--for example, broadly similar types of jobs, education, income, marital situation, and the like--do they show that person the same number of residences, at similar prices, in the same neighborhoods? Cityscape magazine, published by the US Department of Housing and Urban Development three times per year, has a nine-paper symposium on "Housing Discrimination Today" in the third issue of 2015. The lead article by Sun Jung Oh and John Yinger asks: "What Have We Learned From Paired Testing in Housing Markets?" (17: 3, pp. 15-59). They describe paired testing studies as involving six steps:


In-person paired-testing research involves six main steps. First, auditors are selected. Each auditor must be capable of playing the role of a typical homeseeker and not have unusual traits that might influence his or her treatment in the housing market relative to the auditor with whom he or she is paired. Second, auditors are trained about the role they should play during an audit. In most cases, they are instructed to inquire about an advertised unit and then to ask for additional suggestions from the housing provider. ... Third, a sample of available housing units is randomly drawn, usually from the major local newspaper. In some audit studies, some neighborhoods are oversampled or the sample from the major newspaper is supplemented with other sources, such as community newspapers. ...  Fourth, auditors are matched for each test with one member from a historically disadvantaged group. Paired testers are assigned income and other household traits that make them equally qualified for the sampled advertised unit about which they are inquiring. ... Teammates are assigned similar incomes and other traits for a given audit so that differences in these traits do not lead to differences in treatment. ... Because membership in a historically disadvantaged group cannot be randomly assigned, this approach cannot fully rule out the possibility that some unassigned trait
influences treatment, thereby biasing estimates of discrimination up or down; however, good management makes this outcome unlikely. ... Fifth, audit teammates separately contact the housing agent associated with one of the selected advertisements and attempt to schedule a visit. The initial contacts are completed during a short period, but not so short as to be suspicious to the agent. ... Sixth, and finally, after an audit is complete, each audit teammate is asked to record what he or she was told and how he or she was treated. These audit forms provide information on the number of houses or apartments shown to each auditor and also on many other aspects of housing agent behavior. Audit teammates have no contact with each other during an audit and they fill out their
audit survey forms independently. Most audit studies then schedule debriefing sessions in which an audit manager reviews these forms with each auditor to ensure that all information on the forms is accurate.

Similar "correspondence studies" can be done by email, in which the pairs of people are distinguished by choosing names that are likely to imply race or ethnicity, but otherwise have broadly similar traits. As Oh and Yinger point out, these kinds of studies can be useful both for measuring discrimination, and also as a law enforcement tool.

There have been four large national-level paired testing studies of housing discrimination in the US in the last 40 years. "The largest paired-testing studies in the United States are the Housing Market Practices Survey (HMPS) in 1977 and the three Housing Discrimination Studies (HDS1989, HDS2000, and HDS2012) sponsored by the U.S. Department of Housing and Urban Development (HUD)." Each of the studies were spread over several dozen cities. The first three involved about 3,000-4,000 tests; the 2012 study involved more than 8,000 tests. The appendix also lists another 21 studies done in recent decades.

Overall, the findings from the 2012 study find ongoing discrimination against blacks in rental and sales markets for housing. For Hispanics, there appears to be discrimination in rental markets, but not in sales markets. Here's a chart summarizing a number of findings, which also gives a sense of the kind of information collected in these studies. 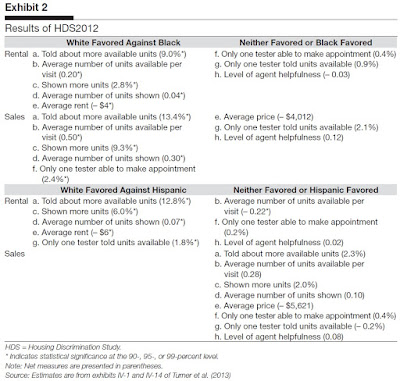 However, the extent of housing discrimination in 2012 has diminished from previous national-level studies. Oh and Yinger write (citations omitted): "In 1977, Black homeseekers were frequently denied access to advertised units that were available to equally qualified White homeseekers. For instance, one in three Black renters and one in every five Black homebuyers were told that there were no homes available in 1977. In 2012, however, minority renters or homebuyers who called to inquire about advertised homes or apartments were rarely denied appointments that their White counterparts were able to make.

Another type of housing discrimination involves "steering," which Oh and Yinger define like this:

"Racial steering is defined to exist if, compared to the White auditor in the same audit, the minority auditor is recommended or shown houses in neighborhoods where the percentage of the population that is White is lower. As exhibit 7 illustrates, each HDS found evidence of steering. The gross estimates of steering in this exhibit range from 4 to 26 percent, and the net measures for both houses recommended and houses inspected are statistically significant for Black homeseekers in 2000 and 2012. The net measure for houses inspected is also significant for Hispanic homeseekers in 2000. ... [T]he incidence of steering has become larger over time."

Notice that the paired testing method rules out the possibility that the homebuyers of different racial or ethnic groups are actively seeking out housing in different neighborhoods.

Oh and Yinger discuss how this evidence fits with various hypotheses about discriminatory behavior. For example, are these outcomes a matter of prejudice from the real estate agent, whether consciously or not? For example, several studies find that older agents are more likely to be involved in discriminatory behavior. Or do the outcomes result from a belief by agents, acting without animus, that treating customers of different races and ethnicities in certain ways is more likely to lead to a completed transaction? Documenting patterns is relatively easy; disentangling motives is hard.

But whatever the underlying reason, housing discrimination tends to promote segregation and is illegal. Paired testing studies are a useful tool for demonstrating the existence of such discrimination. The earlier studies in the 1970s and 1980s did seem to have a powerful effect on raising consciousness and enforcement efforts related to housing discrimination. Oh and Yinger report: "As of 2011, 98 private nonprofit agencies were engaged in fair housing enforcement."  Moreover, the US Department of Justice has since 1992 been carrying out a Fair Housing Testing Program, which typically involves about four investigations per year. They cite recent cases in New York, Alabama, Arkansas, Pennsylvania, and Wisconsin, among others.

Some studies of discrimination, like many of the studies looking at wage gaps between different groups, are looking for the extent to which individual attributes (education, experience, and so on) can explain wage gaps. Such studies are looking at overall data about individuals, and so they have little to say about the behavior of specific employers. In contrast, paired testing studies can be revealing for broad patterns in doing social science research, and also can point toward specific discriminatory behavior.
Posted by Timothy Taylor at 9:00 AM