In the long-ago days of the 20th century, it was difficult to find out about small or medium companies that were far away: hard to discover they existed, hard to get details about their products and pricing, hard to place an order, and especially if the firm was in another country, hard to pay for an order and track shipping. That's all becoming easier, which suggests that small and medium enterprises may be able to draw on wider markets, and not be so focused on local markets. Thus, the World Trade Organization in its World Trade Report 2016 focuses on the theme of "Leveling the Playing Field for SMEs"--that is, "small and medium enterprises."

Much of the report focuses on practical issues affecting small and medium enterprises: connectedness, international trade rules, finance and others. Here, I'll just point to two patterns that I found intriguing. Here's a figure showing the share of exports and imports attributable to small and medium enterprises, which are defined as as employing 10-250 people (the blue bars), and also micro-enterprises (the gray dots), which are defined as employing 0-9 people. 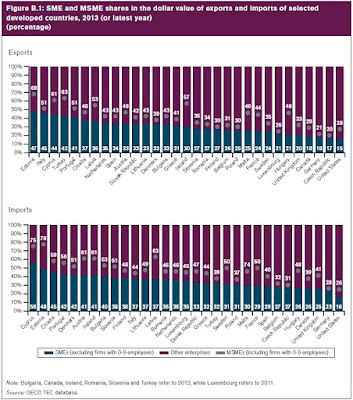 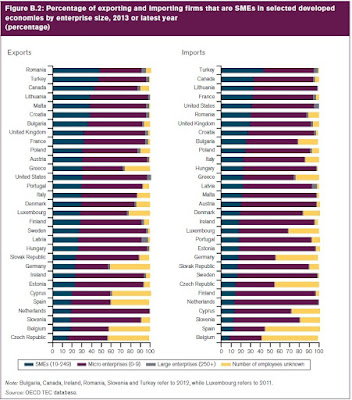 It will be interesting to see how these patterns evolve over time. It seems as if the division of production across national borders into global value chains and the ability to export and import services, not just goods, should mean a larger role for small and medium enterprises in global trade. Or course, it will cause some of them to shift categories and turn into larger companies, as well.
Posted by Timothy Taylor at 9:00 AM