Can China maintain its rapid pace of economic growth in the decades ahead? Jacob Funk Kirkegaard
suggests that one substantial hindrance may be China's education system is not keeping up. He lays out the case in "China’s Surprisingly Poor Educational Track Record," which appears as Chapter 3 in
China’s New Economic Frontier: Overcoming Obstacles to Continued Growth, published by the Peterson Institute for International Economics (PIEE Briefing 16-5, September 2016, edited by Sean Miner). 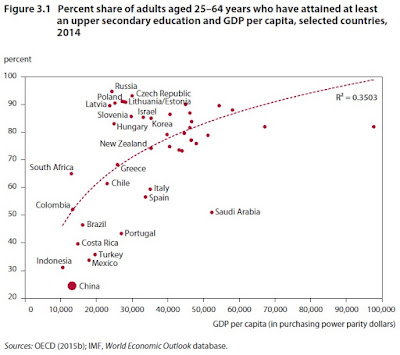 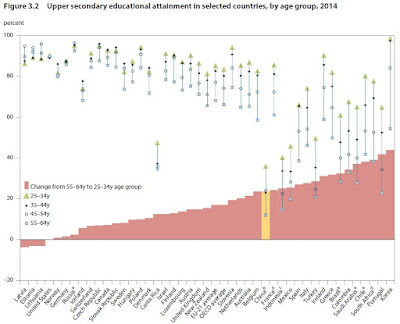 Kirkegaard sums up the situation this way:


"In some ways, China may have been a victim of its own success. The pull effects of its sustained economic boom and rapidly rising wage levels appear to have led too many young people to leave education too early to acquire the skills needed to sustain them (and Chinese economic growth rates) throughout their lifetimes. As Chinese economic expansion shifts toward more skill-intensive growth, those without a secondary education will be less able to find jobs. ...  The Chinese government and society appear to have failed to keep enough of the country’s young people in school during the recent decades of economic growth. This is likely to have long-term scarring effects, as public underinvestment in human capital and individual acquisition of needed skills are difficult
to undo. People’s “lower than otherwise would have been the case” skill levels cannot easily be restructured. Skill shortages at the upper secondary level will make it harder for China to move into the production of higher value added goods and services, lead to increased income inequality and geographic wealth diversity, and complicate the transition to a widespread consumption-based economy."