"Shadow banking" refers to financial organizations that in various ways receive funds from savers and lend money in financial markets--but are not banks. For example, a money market mutual fund receives money from investors, who can be thought of as "depositors," and then invest the money in bonds, which can be thought of as lending the money to whatever government or private entity issued the bonds. But it's not a bank! Alex Muscatov and Michael Perez of the Federal Reserve Bank of Dallas offer a nice quick overview of this sector  in "Shadow Banking Reemerges, Posing Challenges to Banks and Regulators" (Economic Letter, July 2016).

They offer a helpful table of sic types of nonbank financial entities: retirement funds, mutual funds, broker-dealers, alternative investment funds, financing firms, and insurance companies. Here's a chart with a short description of each category and how it can be connected to traditional banks. 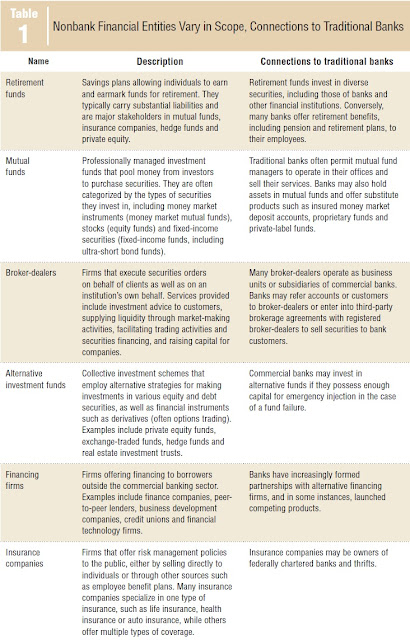 Our national conversation about financial regulation is often focused on banks, but when you think back to the big meltdowns of financial firms that stressed the economy back in 2008, there are a lot of non-bank financial companies like Lehman Brothers, Bear Stearns, the insurance company AIG, the mutual fund Reserve Primary Fund, and others. Indeed, the importance of shadow banking is growing. Muscatov and Perez write:


The  NBI’s [non-bank intermediaries] importance has increased over the past four decades (Chart 1). In 1980, it accounted for roughly 40 percent of the domestic financial sector. As mutual funds’ prominence increased and life insurance companies fueled the markets for corporate bonds and commercial real estate, NBI growth greatly outpaced that of banks. By 1990, NBI accounted for two-thirds of the intermediation market and has continued to slowly gain share.

Here's the Chart 1 to which they were referring. The red dashed line is the total liabilities of traditional banks. The shaded areas show the shadow banking or "nonbank intermediation" firms. Notice that before the financial crisis in 2008, liabilities of banks don't soar; after the crisis, they don't fall. The financial crisis instead happened in the shadow banking sector, where you can see the sharp rise in liabilities before the crisis circa 2008 and the sharp fall afterwards. 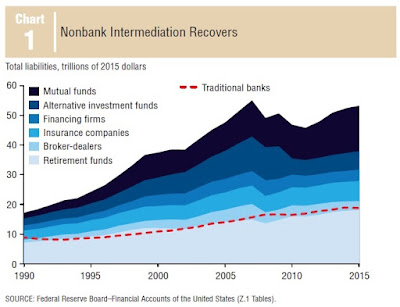 The basic lesson here is that if you still think banks are the core representative institutions in the financial system of high-income economies, you are a few decades out of date. If you are concerned about the dangers of financial sector risks cartwheeling into the real economy, you need to think about the shadow banking sector. Muscatov and Perez point out that while banking regulators do try to think about risks from the shadow banking sector, "Still, many areas of NBI remain obscured from regulators’ view, and not all NBI is subject to supervision." For a specific warning call, the Global Financial Stability Report published by the IMF in April 2016 includes a chapter on "The Insurance Sector -- Trends and Systemic Risk Implications."  The report says:


"The chapter shows that across advanced economies the contribution of life insurers to systemic risk has increased in recent years, although it clearly remains below that of banks. This increase is largely due to growing common exposures to aggregate risk, caused partly by a rise in insurers’ interest rate sensitivity. Thus, in the event of an adverse shock, insurers are unlikely to fulfill their role as financial intermediaries precisely when other parts of the financial system are failing to do so as well."

For those interested in shadow banking, here are a few previous posts on the subject:

Posted by Timothy Taylor at 9:21 AM