Improvements in US Air Pollution

The US government passed its first Air Pollution Control Act in 1955, but the major amendments to that law passed in 1970--including the creation of the Environmental Protection Agency to administer the law--greatly expanded the federal and state enforcement efforts. The EPA has published a web report called "Our Nation's Air: Status and Trends through 2015."

It's been common since 1970 to refer to the six "criteria" air pollutants, which include carbon monoxide, lead, nitrogen oxides, ozone, particulates, and sulfur dioxide. The lines on the graph, from top to bottom, show the rise since 1970 in US GDP, vehicle-miles traveled, population, energy consumption, and carbon emissions--and the fall in the overall emissions of the six criteria pollutants since 1970. 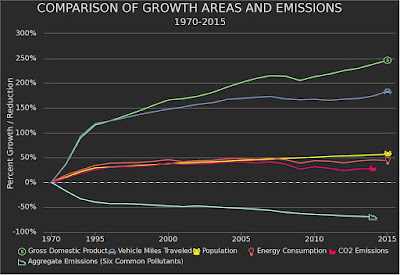 Here's more detail since 1990. On this figure, the vertical axis shows the level of various measures of the criteria air pollutants relative to the National Ambient Air Quality Standards (NAAQS). These air pollutants are below the national standard, and falling since 1990s. 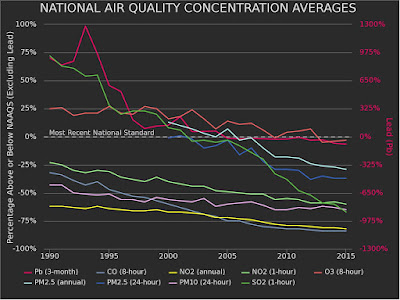 In my experience, this kind of news tends to produce extreme and opposing reactions, either self-congratulatory or self-flagellatory. The self-congratulatory view points to the progress. The self-flagellatory view had no trouble pointing out shortcomings. The reduction in air pollutant emissions might have happened sooner, or at lower cost. There are hot spots of air pollution across the country where air pollution is often above these levels. The criteria pollutants don't include carbon emissions.

The self-congratulatory sometimes point to this progress as an argument that efforts toward cleaner air can be relaxed; the self-flagellatory argue that past progress is a reason to accelerate such efforts.

At least for today, I'd like to step out of that dichotomy and just emphasize that economic growth in high-income countries can, at least in these important cases, happen together with outright reductions in air pollution. Given that air pollution is the world's biggest health hazard, according to the World Health Organization, this is potentially very good news.