The Plague of Long-Term Unemployment in Europe

There's plenty of legitimate reason for concern about the extent to which the US labor market is producing high quality jobs. But every now and again, Americans might want to glance to the east and contemplate Europe's unemployment issues. 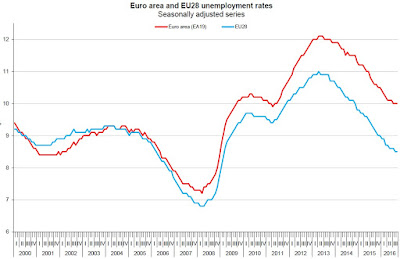 But in at least two ways, Europe's problem is worse than this figure suggests. One is that the averages don't take into account the stress in countries with higher-than-average unemployment: for example, unemployment in France in September 2016 was 10.2%; in Italy, 11.7%; in Spain, 19.3%; and in Greece, 23.2%.

Another dimension is that Europe's overall unemployment rate doesn't show what share of that unemployment is long-term, rather than short-term and transition. A new VoxEU.org e-book, Long-Term Unemployment After the Great Recession: Causes and Remedies, edited by Samuel Bentolila and Marcel Jansen, offers a series of short and readable essays with some overall perspectives and close-up looks at long-term unemployment in eight countries: Denmark, France, Germany, Italy, Netherlands, Poland, Spain, and the UK.

In the "Introduction" by Bentolila and Jansen, they point out that if you counted as unemployed only those who have been out of work and looking for a job for more than a year, the unemployment rate across the 28 countries would still have been nearly 5% in 2015. Moreover, in many countries the long-term unemployed are 40%, 50%, and more of the total unemployed. Here's a figure: 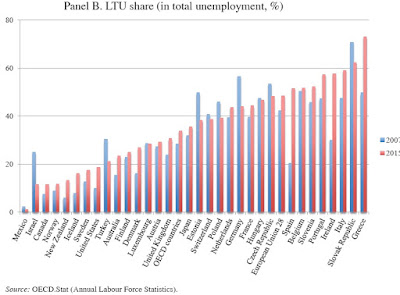 As the figure shows, the long-term unemployed (more than a year) in the US economy is less than 20% of its the total number of our much lower unemployment rate.

American readers: can you imagine the social turmoil in the US if the unemployment rate has been above 10% for the last seven years, instead of peaking at 10% back in October 2009 and falling down to about 5% by a year ago in fall 2015? Can you imagine if half of these unemployed had been looking for work for more than a year? Consider the difference, and you'll have a better sense of why the EU is struggling to have much appeal to the European public.