Janet Yellen, the Chair of the Federal Reserve, doesn't know what determines inflation. I'm not being snarky here. I have an unimpeachable source, which is Yellen herself.

In a speech at a conference held at the Federal Reserve Bank of Boston last month (video and presentations available here), Yellen gave a keynote address on "Macroeconomic Research After the Crisis." She said: "Today I would like to reflect on some ways in which the events of the past few years have revealed limits in economists' understanding of the economy and suggest several important questions I hope the profession will try to answer." The first three questions she raised are fairly standard topics in current macroeconomic research.

"My second question asks whether individual differences within broad groups of actors in the economy can influence aggregate economic outcomes--in particular, what effect does such heterogeneity have on aggregate demand?"

"My third question concerns a key issue for monetary policy and macroeconomics that is less directly addressed by this conference: How does the financial sector interact with the broader economy?"

Her brief comments on these topics are interesting, but it was the fourth and final question that caught my eye:


"My fourth question goes to the heart of monetary policy: What determines inflation?"

It's more than a little astonishing to have the chair of the Fed ask such a question. After all, one major mandate of the Fed is to keep inflation under control. In recent years, the Fed has been confronted with fears about risks of deflation, and a set of ongoing arguments that a slightly higher inflation rate in the range of 2-4% might help the economy. Concerns about Fed policies like quantitative easing were often phrased in terms of worries about inflation. If the Fed chair doesn't know what determines inflation, how are such issues to be addressed?

But Yellen deserves credit for her forthrightness, because the honest truth is that the behavior of inflation over the last 20 years is tricky to explain. For a sense of the problem, consider this figure, which shows two common measures of inflation.  The blue line is the well-known Consumer Price Index; the red line is the measure of inflation that the Fed officially watches, which is called the Personal Consumption Expenditures index. (For a discussion of the differences between them, see my October 2012 post on "Consumer Price Index vs. Personal Consumption Expenditures Index.") Both measures are the so-called "core" measures of inflation, which means that they strip out the fluctuations in energy and food prices so that it's possible to focus on underlying trends. 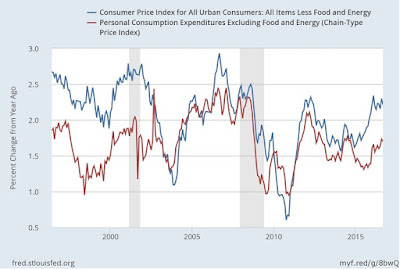 The key element to this story is the numbers on the vertical axis. During the last 20 years, inflation as measured by the PCE rate has varied within a range of 1.5 percentage points, from 1.0 to 2.5%. Inflation as measured by the CPI has varied by a ltitle more, but it's still within a range of about 2 percentage points. Yellen refers to "the remarkable stability of various measures of expected inflation in recent years."
In comparison to inflation moving very little, consider an abbreviated list of the the economic and political events of the last 20 years, starting in 1996: the dot-com boom; the investment and stock market drops that followed; the 2001 recession; the 9/11 terrorist attacks; the federal funds interest rate being cut from about 6% in January 2001 to 1% by August 2003; the Bush tax cuts; China joining the World Trade Organzation in 2001 and the dramatic rise in China's trade surpluses that followed; the arrival of the euro as a full-fledged currency at the start of 2002; the US housing price bubble; a monthly unemployment rate at 5% or lower from June 2005 to February 2008; the federal funds interest rate being pushed up above 5% for a year from July 2006 through July 2007; the collapse of the housing bubble; the financial crisis and the Great Recession; the enormous federal budget deficits from 2009-2012; the federal funds interest rate being pushed down to near zero in December 2008, where it would stay for seven years; the Fed's quantitative easing policies of buying $4 trillion worth of Treasury and mortgage-backed bonds; the stock market falling in the Great Recession and then rebounding.

The issue for economists and policymakers is that we would have expected at least some of these changes to have affected inflation in a substantial way. But inflation has just stayed more-or-less stuck, within its range of 1.5 percentage points.  What is holding inflation in this range, and will it stay there? A lot of decisions rest on the answer to that question, from personal and corporate finance to macroeconomic policy. If you know the answer to "what determines inflation," in a way that makes sense of the patterns in the last 20 years, please feel free to drop Janet Yellen and the Federal Reserve a note.