US Sentiments on Protectionism: A Breakdown

In the heat of the political season, it sometimes sounds as if American opinion has made a sharp swerve in the direction of opposing free trade. However, Cullen S. Hendrix argues that the data tells a more nuanced story in "Protectionism in the 2016 Election: Causes and Consequences, Truths and Fictions," published by the Peterson Institute for International Economics (Policy Brief 16-20, November 2016). Cullen writes:


"Two prominent explanations—that free trade is popular with elites but unpopular with the masses and that younger generations are more protectionist than older ones—can be rejected. Another three—the “China shock” sinking in, the current US electoral map privileging protectionist sentiment, and modern free trade agreements’ growing complexity—are more compelling. At root, the turn toward protectionism is the result of a disconnect between the United States’ rising trade exposure and a failure to adopt the social expenditure policies that have accompanied open markets in other advanced economies."

In response to the belief that free trade has become uniquely unpopular in the US, Hendrix offers some actual survey evidence. For example, here are answers to a Gallup poll question on whether trade is an "opportunity" or "threat." The two answers were tied around 2012, but "opportunity" has surged ahead since then.  dipped a bit. 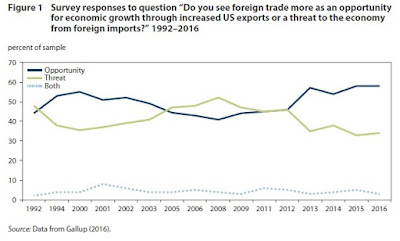 Or  here's survey evidence from the Pew Foundation on whether trade agreements have been good or bad for the US economy. "Good" is down a bit in the last couple of years, but still in the lead. 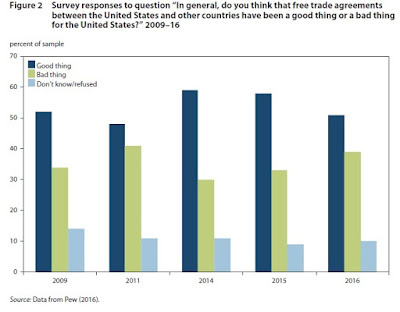 More detailed breakdowns of the survey data show that young people are more likely to favor free trade than older people. Cullen writes: "In the main, younger voters are not clamoring for a
return to more protectionist policies. Indeed, most have never known a world without the World Trade Organization (WTO) and NAFTA; for younger voters, free trade and FTAs [free trade agreements] are the default state of affairs. Anti-FTA rhetoric hits home with people nearing retirement age, but not as much with older or younger Americans."


So why do politicians of all parties pushing for protectionism in 2016? There does seem to be a pattern that support for protectionism rises in election years. But in particular, protectionism tends to be more popular in the "battleground" states that decide national elections. Hendrix writes: "In the 11 battleground states in the 2016 election (Colorado, Florida, Iowa, Michigan, Nevada, New Hampshire, North Carolina, Ohio, Pennsylvania, Virginia, and Wisconsin), the pattern is striking. In only one (Colorado, with 9 electoral votes) did the majority of respondents report that free trade had definitely or probably helped them or their families. In the remaining 10 (which together hold 137 electoral votes), the proportions agreeing with the statement ranged from 25 percent in Michigan
(where Bernie Sanders won the Democratic primary) to 27 percent in Ohio and 48 percent in Virginia.

In other words, if California and New York and Texas were the swing states, rather than being locked in for one party or another, politicians would be a lot less likely to talking up their skepticism about trade.

The other issue that Hendrix points out is that free-trade agreements have become vastly more complex, as they have less to do with just reducing tariffs and more to do with setting common standards for competition and regulation across industries. He notes: "The text of the Israel-US Free Trade Agreement, which entered into effect in 1985, totals roughly 7,500 words. The text of the TPP [Trans-Pacific Partnership], inclusive of annexes and schedules, runs to roughly 2 million words—an astonishing 266 times longer. The TPP is not an isolated case: FTAs have grown longer and more complex over time, as they move beyond tariff barriers to touch on a host of regulatory issues related to market access, harmonization of standards, environmental issues, intellectual property, and health and safety."

This added complexity means that those who are just fundamentally opposed to trade can point to specific controversial provisions, and politicians can twist and dodge on the issue by saying that while they favor free trade in general, certain provisions of this particular agreement aren't acceptable.  Of course, in agreements between multiple nations that are several million words in length, there will always be controversial and just plain wrong-headed provisions.

Finally, Hendrix points out that the many European countries have embraced openness to international trade--for example, through the European Union--but have accompanied that embrace with generous programs for supporting displaced worker. Indeed, perhaps the defining characteristic of the what is sometimes called the "Nordic model" of the Scandinavian economies involves an embrace of free trade and market capitalism that is combined with high taxation and an active welfare state.

While I largely agree with Hendrix argument, I'd add this point. Compared to a lot of countries around the world, US support for open international trade tends to be relatively low. I suspect that this situation arises because most other countries around the world have for a long time had much more exposure to international trade than does the US economy, which has an enormous internal market. Moreover, those who feel threatened by international trade tend to have much larger political megaphones than those who support it: indeed, free trade is a classic case of a situation with widespread but diffused benefits and more concentrated costs. During political campaigns, the US voices opposed to trade get louder and the defenders tend to duck their heads and wait for the wave to pass.