Nonstandard Employment Around the World

Standard employment refers to a situation where a worker has a full-time job, and can presume an ongoing relationship with the employer. Non-standard employment describes other kinds of jobs: daily, seasonal, short-term contract, part-time, temporary agencies,and others. Sometimes non-standard employment is what a worker wants; other times, it's all that seems to be available to a worker. But the distinction is potentially importance, because the relationship between employer and worker in a standard jobs is more likely to involve stable income, predictable hours of work, benefits, a safer workplace, on-the-job training, a few steps along a career path, a voice in the workplace. The International Labour Organization lays out available facts and evidence in its November 2016 report: "Non-Standard Employment Around the World: Understanding challenges, shaping prospects."

As a starting point, it's useful to be clear that nonstandard employment is still employment--that is, working for a wage or salary--and thus it's not subsistence agriculture or what the ILO calls "petty trade." In much of the world, substantial shares of the workforce don't work for a wage; indeed, one of the dividing lines between the very poor and the rising middle-class in a number of developing countries is whether workers in a household have an ongoing wage relationship. Here's a figure showing the prevalence of wage-related work around the world: I won't run through all the evidence on categories of non-standard employment here, but as one example, consider the prevalence of temporary work. In the US, less than 5% of all wage employees are temp workers. In lots of European countries, it's 10-20%. In other countries around the world, it's not that unusual for more than half of wage employees to be temp workers. The upper panel is data on temp workers in Europe, while the bottom panel is the rest of the world. 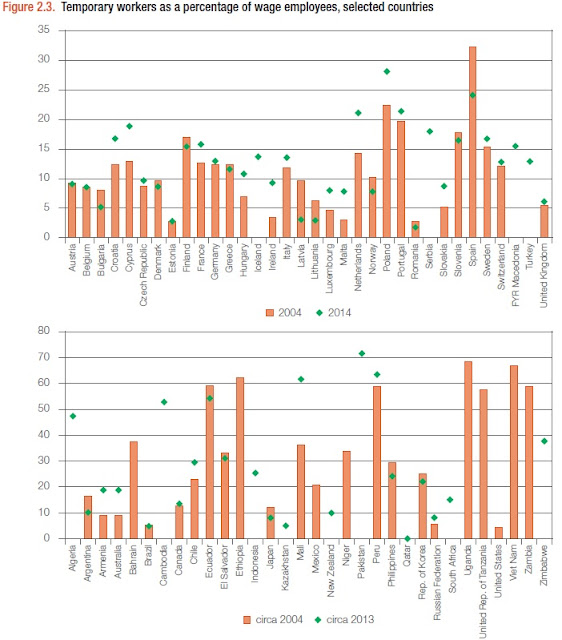 Survey data in Europe suggests that about 60% of those in temp jobs would prefer a permanent job, but can't find one. Similarly, countries across Europe, about 10-15% of workers are on fixed-term contracts. In Europe, the US, and Canada, about 25% of workers are part-time, and survey results suggest that up to about one-third of this group would prefer full-time employment.

The evidence on trends in non-standard employment over time doesn't seem especially clear to me, since many of these categories are overlapping in some ways and not well-defined. In some low-income and middle-income countries, people may be moving from non-wage work to non-standard employment. But as a broad statement, it does seem that non-standard employment is on the rise, because lots of firms like the flexibility that it offers. Indeed, many firms now think of themselves as having a "core" set of mostly full-time employees, surrounded by a periphery of other employment relationships that include part-timers, temps, and work that is contracted out or outsourced in some way. The result can be a two-track labor force, made up of insiders and outsiders.

Non-standard employment raises difficult questions of public policy. For some, the flexibility of part-time, seasonal, or contract work is an attractive feature. For others, non-standard work is a stepping-stone, a mechanism to get a foot in the door and show what you can do. But for others, non-standard work is a trap, in which you are treated as a labor commodity that can easily be replaced, and it is not clear. The ILO report has a lengthy discussion of the studies on work hours, pay conditions, health and safety, and so on. Here's a flavor of what it says about "stepping stones" and "traps" (footnotes and references to figures are omitted):


Evidence on the prevalence of “stepping stones” versus “traps” phenomena can be examined both through the length and the probability of transitions between various employment statuses for different types of NSE [non-standard employment]. The evidence on these two aspects of transitions shows that, in a vast majority of examined countries, yearly transitions from non-standard to standard employment remain below 55 per cent,  and even below 10 per cent in some instances (see review of literature given in the Appendix to this chapter, table A5.1). The “stepping-stone” hypothesis is confirmed  in some instances (Denmark, Italy, the Netherlands, United States), in that being employed in a temporary job, rather than being unemployed, significantly increases the probability of obtaining a regular job. The effect varies, however, for specific population groups. It seems to be strongest for young graduates, immigrants and workers initially disadvantaged either in terms of education or of pay. These are indeed the workers for whom the benefits of having lower initial screening, obtaining general rather than specific work experience, and expanding their network through nonstandard jobs are high. In some instances, for example in Uganda, men also have a higher likelihood of moving out of part-time and temporary work to full-time permanent employment, compared to women, who seem to be penalized in terms of labour market transitions. However, when temporary work is further liberalized and the pool of temporary workers increases, then longer-term evidence, such as for Spain or Japan, suggests that over a lifetime of working, those workers who started off with a temporary job have a greater chance of switching between non-standard work and unemployment, compared to workers who start with a permanent contract. In these cases, temporary
work ceases to be a stepping stone. Most recent evidence from European countries also shows that there is a negative correlation between the share of temporary workers  among employees and the share of temporary employees who moved to permanent employment.

A natural political reaction here is to start passing laws about how employees can be treated, and a number of countries have tried to pass laws, for example, that companies are not allowed to hire workers on fixed-term contracts to do "permanent" work, or to pass rules about minimum hours, minimum wages, predictability of hours,  limits on hiring temp worker or on renewing temp arrangements repeatedly, limits on on-call contracts, bringing nonstandard workers into collective bargaining arrangements, and more. The ILO offers an extended discussion of the prevalence such policies.

My own sense is that while such regulations may often be beneficial in preventing abusive practices, I am not confident that a focus on telling firms what they need to do is a sufficient answer. Indeed, many countries have found themselves in a situation where they pass rules to limit certain practices in non-standard employment, but then immediate start carving out exceptions that keep allowing flexibility in jobs for the young, the long-term unemployed, the old, those trying exit from public assistance, and so on. Also, when government passes lots of rules governing what firms must do in an employment relationship, firms are going to think twice before hiring at all--and are going to take a second look at how they can outsource or automate various tasks. Thus, it seems important to me have some deeper research on the incentives that firms have to use non-standard employment, and whether those incentives might be tweaked, as well as to think about institutions outside the job relationship that might help non-standard employees by organizing mechanisms to finance additional job training, health insurance, retirement savings, and protection against fluctuations in earnings.