"Under the Paperwork Reduction Act of 1995 (PRA), the Office of Management and Budget (OMB) is required to report to Congress on the paperwork burden imposed on the public by the Federal Government and efforts to reduce this burden." The most recent such Information Collection Budget of the United States Government was produced by the Office of Management and Budget of the outgoing Obama administration and published in December 2016

"In FY 2015, the public spent an estimated 9.78 billion hours responding to Federal information collections." When the report breaks down these time costs by the government agency imposing them, by far the biggest contributor are rules from the US Department of the Treasury--which is in large part the hours spent filling out tax forms.

Here's a figure showing how the time burden has evolved in the last decade or so. The red line is the actual estimate. The green line shows that most of the changes are due to new rules, not to higher time costs for the already-existing earlier rules. 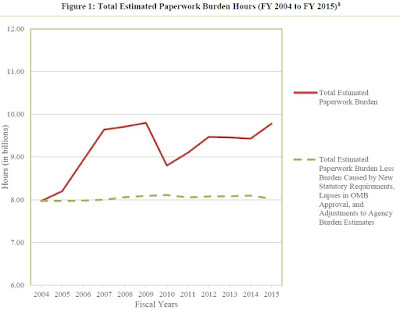 These time are just estimates by the federal agencies themselves, of course, and should be taken with a few tablespoons of salt. For example, if you dig into the details of the report, the drop in paperwork burden in 2010 arises not from changing any actual government paperwork burden, but rather because the US Department of the Treasury decided that its already-existing paperwork burdens took about 1.5 billion hours less than it had estimated the previous year.

But for what it's worth, let's take the estimate of 9.78 billion hours of paperwork burden in 2015 and put it into a little perspective. As a round-number estimate, say that a full-time employee works 2000 hours per year (that is, 40 hours/week and 50 working weeks in a year). If you divide the 9.78 billion hours by 2000 hours/year worked, it's the equivalent of 4,890,000 full-time jobs.

Of course, in a number of cases no one is getting  paid for the job of filling out federal paperwork requirements; for example, a person who pulls together financial records and fill out their own tax form doesn't get paid for doing so. But a nonmonetary cost is still a cost. The US economy had about 142 million jobs in 2015. So measured in terms of time, federal paperwork costs alone were equal to roughly 1/30 of the entire US workforce.