Americans are all-too-familiar with issues in the US housing market: fluctuations in housing prices, along with problems of affordability and even homelessness. I'm not sure whether it is consoling or confounding to observe that similar problems exist across the European Union, but The State of Housing in the EU 2017, just published by Housing Europe, which is a federation of 45 national and regional housing-related organizations  that in turn represent about "43.000 public, social and cooperative housing providers in 24 countries." Here are a few comments  of the report:


Overall, the homeownership rate in the EU is similar to the United States. But one ironical pattern is that the countries with the highest homeownership rates tend to be the formerly Communist states that were part of the Soviet Union, because people in those countries were able to receive ownership of the homes in which they had been living for a low price. The report explains:

"The most common tenure in Europe is owner occupation, with an average 69.4% of the population living in owner-occupied housing against 30.6% tenants. However, this masks wide variations in tenure distribution across countries. Most former communist countries of Central and Eastern Europe show a very high share of home-owners without mortgage, as after the fall of the communist regimes tenants were offered to buy the dwellings in which they lived at a low price. In Southern European countries outright ownership rates are also high. In most English-speaking and Nordic countries, Belgium and the Netherlands owners with outstanding mortgages are the most common tenure type. Only in Switzerland and Germany renting is more common than owning ..."

Here's a figure showing homeownership shown by the blue bars across countries of the EU, while private rental appears as the orange bars. 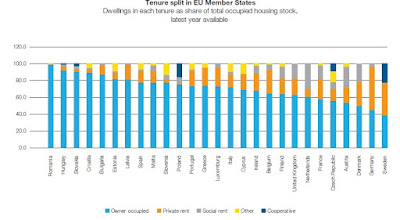 In addition, homeownership rates have been declining in Europe in the 21st century:

"However, a number of countries have registered a decrease in the share of owner-occupation since the turn of the century, corresponding to an increase in the share of tenant households in the private rental market - for instance in Ireland and the United Kingdom. This trend is reflected in the EU average: keeping in mind that there are significant cross-country variations, since 2007 the share of owners with a mortgage increased slightly (from 25.6 to 27%), that of owners outright decreased (from 47.2 to 42.2%). Over the same period, the proportion of tenants at market price increased significantly (from 12.6 to 19.9%) and that of tenants paying a reduced rent decreased (from 14.6 to 10.9%) ..."

A further irony is that the high rates of homeownership in a number of eastern European countries may be deceiving in the sense that a substantial share of this housing stock is in extremely poor quality, and the new owners don't have the resources to fix it up. Others experience "fuel poverty," meaning they don't have the resources to keep the property heated or cooled.

Affordable housing is a problem across the European Union, too (citations omitted):

"Housing costs is the single highest expenditure item for households, at about a quarter of total households’ budget in 2015, increasing from 21.7 in 2000 and 22.5% in 2005 to 24.4 in 2015 ... A large number of households are ‘overburdened’ by housing costs (i.e. they spend over 40% of their disposable income on housing) ...  11.3 of the overall EU population was ‘overburdened’ by housing costs in 2015 ... Most interestingly, although the average housing overburden rate for the overall population has remained more or less stable in recent years, the share of poor people overburdened by housing costs has increased significantly over the past decade, from 35% in 2005 to over 39% in 2015. This increase has been particularly steep in some crisis-ridden countries where the housing cost overburden rate among the poor has more than doubled over this period (Greece, Ireland, Portugal and Spain) ..."

Affordable housing policy across the European Union has been shifting away from having governments building additional housing to providing housing support to those with lower income levels.

"[T]he literature on housing research broadly distinguishes between supply and demand side interventions or, sometimes also referred  to as object and subject subsidies. Historically, the housing shortages many European countries faced in the wake of World War I and II have been tackled by large government investment programmes into building new homes. Building subsidies were seen as the most effective way of dealing with this problem. In many cases this was achieved via the construction of public or social housing. As a result the most severe housing shortages have been alleviated and housing standards have improved. Despite the diversity of European housing systems and several exceptions in this regard (notably Austria for instance), there has been a noticeable shift from supply to demand side subsidies over recent decades in many European countries, with many now spending more on housing allowances than on supply-side subsidies or building new homes. A trend towards declining capital investment into housing has been particularly prevalent in countries with a comparatively large rented sector, including Denmark, France, the Netherlands and Sweden." 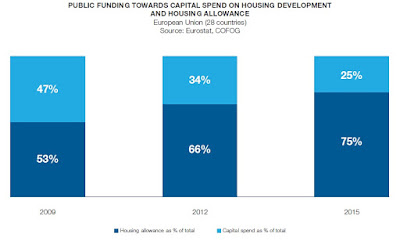 Finally, the report expresses considerable concern about the high cost of housing in cities. Along with the common problems of a rising urban population, and limited amounts of land in urban centers, issues of foreign investors buying up properties and existing owners using options like  AirBnB to turn their properties into short-term rentals are big topics. And a backdrop for all of this is that construction is not only down, but in many European cities faces a semi-hostile regulatory environment. From the report:

"Some of Europe’s most fashionable cities are indeed facing a ‘housing gap’: a large number of people wanting to live in these cities in order to benefit from the education, jobs, lifestyles and cultural life that they offer. At the same time the buoyant demand for property in some of Europe’s most popular cities has also attracted investors, many of whom seek to establish property portfolios. Given that land in urban centres is a finite resource, such an increase in demand may result in spiralling property and rental prices (unless adequately regulated). ... In “hedge cities”, prime destinations for global capital seeking safe havens for investments, housing prices have increased to levels that most residents cannot afford, creating huge increases in wealth for property owners in prime locations while excluding moderate- and low-income households from access to homeownership or rentals due to unaffordability. Those households are pushed to peri-urban areas with scant employment and services ..."

Europeans are quite likely to report that their cities lack affordable housing. Only in Greece (EL) and Croatia (HR) do a majority of people believe that in their city it is easy to find good housing at a reasonable price. (A list of two-letter country codes is available here.) 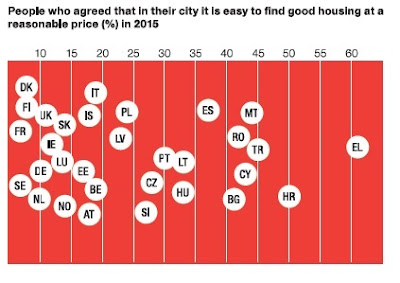 It seems to me that American political discourse can sometimes have a tendency to romanticize how life is better in European nations. When it comes to  housing markets, at least, both the US and EU are struggling with a lot of similar issues.