Alan B. Krueger delivered the annual Daniel Patrick Moynihan Lecture on Social Science and Public Policy, on the topic of "Independent Workers: What Role for Public Policy," for the American Academy of Political and Social Science on May 18, 2017. Video of the roughly hour-long actual lecture, which also shows the slides, is here. A revised and written-out version of the lecture, which I'll draw upon for this post, is posted here as Working Paper #615 for the Industrial Relations Section at Princeton University (September 2017).

The issue here involves workers who do not have a "traditional" employment relationship: that is,  a job with a given employer and an expectation that the job is likely to continue into the future. Instead, independent workers work for themselves, and earn their living through a series of short-term interactions or time-limited contracts. As a result, they don't receive employer-provided benefits like health insurance, a pension plan, paid vacation, life insurance, and the like.

How many workers fall into this category? Perhaps oddly enough, some main data sources disagree. Back around 1979, the tax data on people who reported self-employment income and the Census Bureau's Current Population Survey both suggested that about 8% of workers were self-employed. But since then, more people are reporting that they are self-employed on tax data, while fewer people are telling the survey that they are self-employed. On this one, I trust the tax data more! Krueger writes that this divergence "suggests to me that the job market has changed so quickly that many workers are fundamentally confused about the nature of their employment relationship." 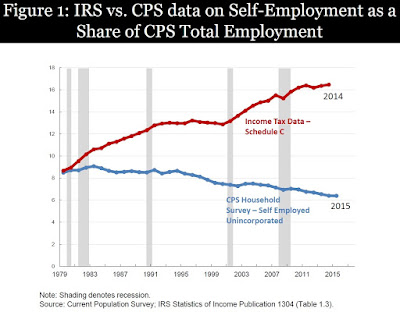 Krueger reports survey results that the employer-provided benefit which most concerns independent workers, far and away, is a lack of access to health insurance. While that concern is obviously immediate and foremost in people's minds, I'll add my own belief that many of the independent workers should probably also be quite concerned about longer-term issues, like a lack of retirement savings and a lack of ongoing job-training. What might be done here? Krueger suggests a number of small-scale policies, and one bigger policy. Without passing judgment on them, here are some of the options, with small-scale possibilities first:

"One policy proposal that has gained some traction is to have a carve out for intermediaries that permits them to provide benefits without risk that their contractors will be deemed employees. Indeed, my sense is that many of the new online intermediaries would like to provide some benefits to their workers but they refrain from doing so because they are worried that they will be classified as an employer if they provided access to benefits, such as life insurance. ...

Extend coverage under Title VII of the Civil Rights Act of 1964 to independent contractors. The self-employed currently have few options if they face discrimination. The arguments in favor of this proposal are obvious: (1) it would extend protections that already exist for employees to the self-employed; (2) discrimination is plainly unfair and economically inefficient if it originates from personal animus or ignorant stereotypes; and (3) there is an administrative system in place to enforce the policy. ...

Here’s a really ambitious, big idea: Hanauer and Rolf (2015) have proposed the idea of `Shared Security Accounts,' in which all workers would be covered by a universal system that provides health insurance, retirement benefits, paid leave, and so on. Employers and online platforms like Uber would contribute 25% of their workers’ compensation into a fund to pay for those benefits. Workers could choose which benefits they want. ... I should also note that Shared Security Accounts are not a total head-in-the-sky idea. Washington State and New Jersey have considered legislation along these lines for self-employed workers.

When thinking about public policy for such workers, Krueger describes some of  his objectives this way:
It should be noted that these objectives are debatable. For example, consider a household with two adult workers: one has a job with health insurance, pension, and all the rest, while the other is an independent worker without such benefits. It's not obvious that public policy should seek to assure the same benefits for both workers. But it is obvious that if public policy does not make some efforts in this direction, we will end up--either when independent workers don't have a partner to provide benefits, or when our hypothetical two-person household separates or divorces--with a substantial number of workers who lack health insurance, life insurance, and retirement saving. If or when this happens, it will be a problem for the political system, not just for those workers. Better to think about some ways to address these issues in advance.

Readers who would like more on the "gig economy" and independent jobs might start with these posts:
(Full disclosure: Krueger was the Editor of the Journal of Economic Perspectives, and thus my boss, for the six years from 1996-2002.)
Posted by Timothy Taylor at 10:58 AM