In labor market jargon, "prime age" refers to workers in the 25-54 age bracket. Looking at this group takes the focus off issues like whether more young adults are attending college rather than taking full time jobs, and whether older adults are retiring sooner or later. In the US, labor force participation has been falling for prime-age male workers since the 1960s, and for prime-age female workers since the 1990s. Some of the reasons are similar across gender, like the low prospects, pay, and security of jobs for low-skilled workers. But some of the reasons are related to gender. A new ebook edited by Diane Whitmore Schanzenbach and Ryan Nunn, The 51%: Driving Growth through Women’s Economic Participation, offers a  collection of readable essays with facts and concrete proposals about the labor force participation rate of US women (published by Hamilton Project at the Brookings Institution, October 2017)

Here are a few of the facts that caught my eye in the first essay, "The Recent Decline in Women’s Labor Force Participation," by Sandra E. Black, Diane Whitmore Schanzenbach, and Audrey Breitwieser.

As background, here's a comparison of labor force participation rates for prime-age US men and women. 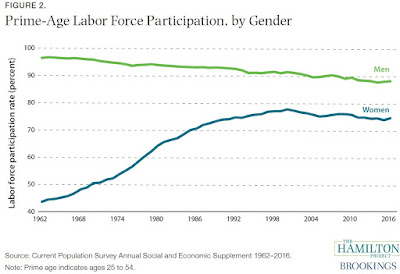 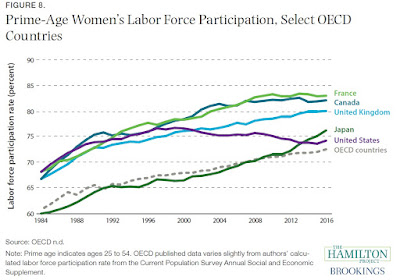 One intriguing tidbit in the text discussion of this figure is that "a higher share of women’s employment in the United States is full time, compared with other OECD countries. The share of full-time work among women in the United States has trended up somewhat over time, indicating that the relative decline of U.S. women would be less pronounced if one examined hours worked rather than participation." 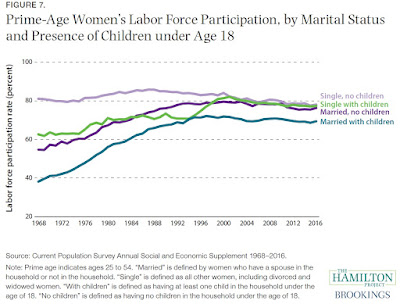 Papers in the rest of the volume consider a variety of policies that might help to raise the labor force participation of US women.  I'll mention three broad categories of such proposals here: changes in the tax code, paid leave, and support for child care.

In the category of tax code changes, Hilary Hoynes, Jesse Rothstein, and Krista Ruffini suggest "Making Work Pay Better Through an Expanded Earned Income Tax Credit," which would be available to all low-income parents, but because women are more likely to be single-parenting, it would tend to have a bigger effect on women workers. Sara LaLumia discussed "Tax Policies to Encourage Women’s Labor Force Participation." Her specific proposal is "a new second-earner deduction, equal to 15 percent of the earnings of a lower-earning spouse. The proposed deduction would raise the after-tax return to work for many wives, encouraging an increase in married women’s labor supply, and would reduce marriage penalties on average."

Several of the proposals focus on expanded job leave: for example, Nicole Maestas writed about "Expanding Access to Earned Sick Leave to Support Caregiving" and Christopher J. Ruhm considers "A National Paid Parental Leave Policy for the United States." Both policies reflect the social reality that time commitments for children and other caregiving tend to fall more heavily on women.

My own concern is that these proposals tend to mix together two different. goals. One goal is to give households more support when family responsibilities are heightened, like a new child or a sick relative. Expanded job leave can accomplish that goal. The other goal is to increase the labor force participation rate and job prospects for women over time. The effect of expanded job leave on this goal is more ambiguous. In some countries with especially generous parental leave, like Italy, these provisions look more like an off-ramp for women to leave the labor force, rather than a mechanism to help women remain connected. I discussed this evidence in "Some Economics of Parental Leave" (March 3, 2017).

With that concern noted, the US is a considerable outlier among high-income nations in not having any national provisions for paid maternity leave or for paid parental and home care leave, as vividly shown in the table below from the Ruhm paper. Proposals for moderate leave, with moderate pay, are more likely to balance the concerns of supporting families in a time of stress while still keeping women attached to the labor force. A recent bipartisan proposal for a moderate parental leave law, which specifies funding and conditions, is discussed in "Facing the Costs of Paid Parental Leave" (June 12, 2017). 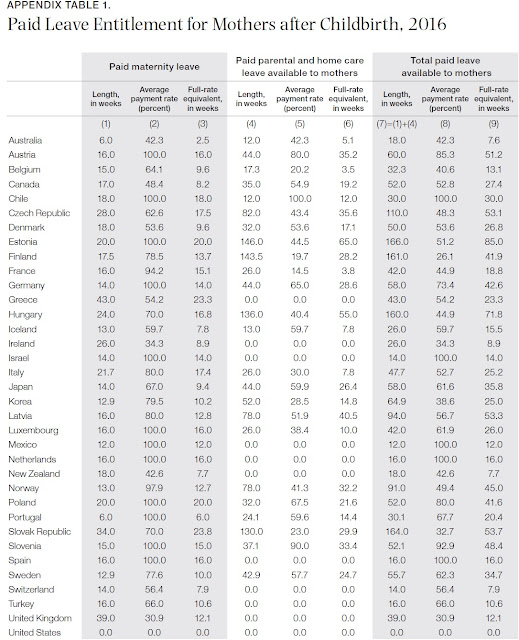 The final set of proposals look at public support of child care: for example, Elizabeth U. Cascio considers "Public Investments in Child Care." while Bridget Terry Long looks at the issue of college students who are also parents in "Helping Women to Succeed in Higher Education: Supporting Student-Parents with Child Care."

The international evidence mentioned above does offer support for the idea that reliable and affordable child care helps women remain attached to the labor market. Here's a figure from Cascio's paper. The left-hand diagram shows that the share of mothers employed in families with income below $25,000 is about 60%, with median child-care costs around $2,000 per year. Only about 20% of these mothers use paid child care for very young children. In contrast, for mothers in families with income of $75,000 or more, about half of the mothers use paid child care for very young children ad a median cost in the range of $7,000-$8,000 per year. The mothers in these higher income families have an employment rate of about 80% when children are very young, which rises as the children reach school-age. 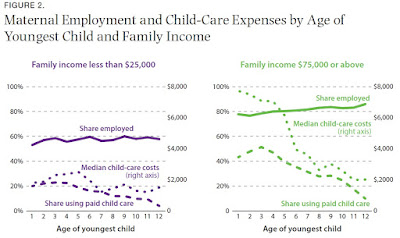 One final issue, involving flexibility of hours both in the shorter and the longer term, is mentioned in several of the papers, but is not the subject of a direct proposal. Claudia Goldin's Presidential Address at the 2014 meetings of the American Economic Association focused on "A Grand Gender Convergence: Its Last Chapter." Part of her thesis was to focus on the relationship between hours worked and total pay. For example, does someone who works half as many hours get half the pay--or less for being a part-time worker? Does a high-powered lawyer or executive who work 50% more hours get 50% more pay--or considerably more as an important superstar employee? Goldin argued that workers who need more flexibility of hours (often women) are penalized in the labor market, while those who make outsized commitments of time (often men) receive outsized rewards. She offers the intriguing example of pharmacists, who are essentially paid by the hour even if they choose to work part-time for a few years. Perhaps not surprisingly, women were less than 10% of all pharmacists back in the 1960s, and are now more than half. Pharmacists are a very specific job where highly-skilled people can readily substitute for each other and shift hours. I do not have useful advice for how to make that model operate in other contexts. But I suspect that organizations which structure themselves to offer high-powered, career-path jobs to workers who may go through several extended periods of part-time work might be rewarded with an influx of highly motivated women workers.

For other previous discussions of women in the labor market, see: