Teacher Absenteeism in the U.S.

It is of course arbitrary to draw a line about what level of absence of a K-12 teacher should be considered "chronic," but a common line seems to be more than 10 absences per year. The data on teacher absence is collected nationally by the federal Office of Civil Rights. The most recent data is for the 2013-14 school year, and it's now being used by various researchers. Here's one bottom line from David Griffith in "Teacher Absenteeism in Charter and Traditional Public Schools (Thomas B. Fordham Institute, September 2017).


"In June 2016, OCR [the Office of Civil Rights] released teacher absenteeism data for 2013–14, showing that 27 percent of US teachers were chronically absent in that year. ... [I]t noted that fifty-eight school districts with more than one thousand teachers had reported chronic absenteeism rates above 50 percent."

For clarity, here's the definition of teacher absenteeism used by the OCR:


"A teacher is absent if he or she is not in attendance on a day in the regular school year when the teacher would otherwise be expected to be teaching students in an assigned class. This includes both days taken for sick leave and days taken for personal leave. Personal leave includes voluntary absences for reasons other than sick leave. Teacher absenteeism does not include administratively approved leave for professional development, field trips, or other off-campus activities."

When I end up (for my sins) discussing this data with K-12 teachers, a common response is to point out that sometimes teachers have legitimate reasons for a large number of absences: maybe a personal health condition, maybe a family crisis. And this is of course true. But one would tend to believe that these kinds of situations would arise at about the same rate across different states and different kinds of schools. That is not in fact true.

As noted above, a number of large districts have teacher absenteeism rates above 50%. To the best of my knowledge, there is no evidence showing that teachers in these districts are especially susceptible to debilitating illnesses or family emergencies. 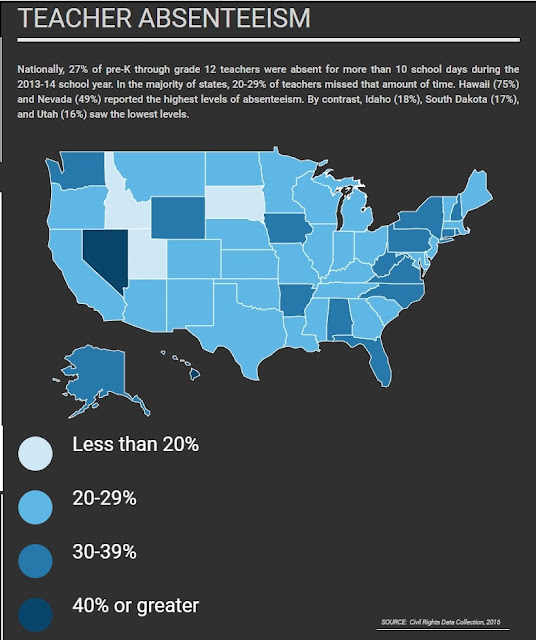 How does use of sick leave and personal days by teachers compare with non-teachers?  Griffith writes:


"Because of the lack of similarly comprehensive absenteeism data for other industries, putting these numbers in context is challenging. However, according to one study that used data from the National Health Interview Survey (NHIS), only 7.7 percent of US workers with access to paid sick leave take ten or more sick days per year, and just 17.6 percent take five or more sick days. In other words, the percentage of teachers in traditional public schools who take more than ten sick and personal days is almost four times higher than the percentage of employees in other industries who take at least ten sick days ..."

International comparisons can be tricky as well. But for what it's worth, here is Griffith's take:


"Clearly, some absence is unavoidable—teachers are only human. Yet US teachers seem to have poor attendance compared to their counterparts in other industries and other countries. Early studies estimated that 5.2 percent of American teachers are absent on a typical school day, compared to just 3.2 percent of British teachers and 3.1 percent of Australian teachers. However, a more recent analysis pegged the teacher absenteeism rate in the United States at 4.4 percent."

What policies might be useful in reducing teacher absence? A 2014 report looked at data across 40 large school districts, and found that most policies to encourage attendance had only a small effect. Some of the policies considered included: payment for unused sick leave, either at the end of each year or at retirement; rewarding excellent attendance with money or additional leave; restricting dates when personal leave can be used (like not right before or right after scheduled school vacations); requiring a medical certificate for sick leave; and others. But this evidence is hard to interpret; for example, it might be that districts with a bigger teacher absence problem are more likely to adopt these kinds of policies, making it hard to interpret the effects of such policies.

The 2014 report also notes that the institutional culture involving teacher absence may matter more than the formal rules. "Anecdotally, teachers and principals often cite school-based norms that shape the culture and tone around teacher attendance – perhaps more effectively than the broader and more distant formal district policies. Something as straightforward as principals expecting their teachers to call them directly when they must take leave can often shape school culture concerning teacher attendance. Other teachers report that absenteeism is held low when the school has a policy of not hiring substitutes, but distributing an absent teacher's students to other teachers in the school."

For the record, all three of my children have either gone through public K-12 schools or are still doing so. My experiences with their teachers have been overwhelmingly positive. But yes, every other year or so, there will be a teacher in one of the classes who misses a lot of classes. My own philosophy about education is that the students come first. That subset of teachers who are chronically absent--especially year after year--needs to be actively monitored, and in some cases changes need to be made.
Posted by Timothy Taylor at 9:00 AM