I've long believed that exchange rates can be the single toughest subject to teach to introductory economics students. Talking about travelling abroad and exchanging currency can help understand how someone can benefit or lose from movements in exchange rates. But when trying to explain exchange-rate risk for nations or private firms who have borrowed in one currency and need to repay in a different currency, more practical examples are a big help, too. Adam T. Jones,William H. Sackley and Ethan D. Watson have a very nice example all worked out and ready to be plugged into your reading list or lecture notes. It appears as "Teaching exchange rate risk using London's Gherkin building: How investors were in (and out of) a pickle," in the Journal of Economic Education (2017, 48:4, 276-287). (The JEE is not freely available online, but many readers will have access through a library subscription.)


The Gherkin is the nickname for an iconic office building in London, built in the early 2000s. As the authors note (citations and footnotes omitted): "Sir Norman Foster, a world-famous British architect known for innovative and sustainable designs, scaled back the design to the 41-story structure that is the current Gherkin building. Construction on the building began in 2001 and was completed in 2003. Foster’s client was Swiss Reinsurance Company, Ltd. (Swiss Re), a global insurer and reinsurer. Swiss Re invested a total of 228.6 million pounds sterling (GBP) in land and construction cost. Swiss Re occupied just over half of the Gherkin as their British headquarters, and leased out the remainder. In late 2006, Swiss Re began seeking a purchaser in hopes of executing a sale-leaseback of the Gherkin building, near the top of the real estate market cycle. ..."

Here's a picture of the Gherkin. 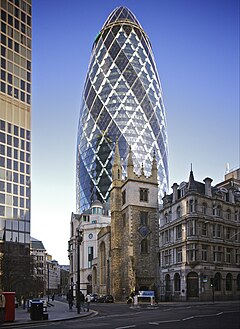 Essentially, the problem arose because part of the deal was financed with debt, some in British pounds and some in Swiss francs. This arrangement made some sense. Swiss Re, which was continuing to lease space in the building, was paying rent in Swiss francs. So the new owners could use rent from the British tenants to pay the debt that was denominated in pounds, and the rent from Swiss Re to pay the debt denominated in francs. However, the purchase contract also had a rule that the ratio of the loan to the value of the building could not exceed 67%. Notice that the value of the loan was in pounds and francs, while the value of the building was solely in pounds. So when the value of the Swiss franc rose substantially against the pound, the loan-to-value ratio rose well above the 67% limit. As a result, the lenders of the debt demanded more collateral, and ended up foreclosing on the building. Here's how Jones, Sackley and Watson tell it (again, citations and footnotes omitted):


"Unfortunately, the structure of the deal eventually led to financial implosion. There were two important aspects to the structure of the deal. First,GBP 396 million of the GBP 600 million purchase price was financed with debt, and the rest was equity investment from the IVG Euro Select 14 Fund and Evans Randall’s equity investment. The GBP 396 million loan was denominated in two currencies: GBP 212 million worth was borrowed in British pounds, and GBP 184 million worth (CHF 447 million) was borrowed in Swiss francs. Second, the deal structure also included a loan-to-value clause, which required the group to not exceed a 67 percent loan-to-value ratio. ...

"[I]n reality the financing of the building in two currencies was reasonable, because the lease paymentswere being collected in pounds sterling and Swiss francs. Swiss Re occupied approximately half the building and paid their rent in francs. The other tenants were British firms paying rent in pounds sterling. Therefore, the lease payments were providing a partial hedge of the foreign exchange risk for interest payments but not the principal value of the loan. Thus, despite some rent being paid in francs, IVG was exposed to a less than fully hedged, foreign exchange risk.

"At the time the deal was struck, the CHF per GBP exchange rate was approximately 2.4 Swiss francs per British pound.After the deal was struck, the value of the pound relative to the franc dropped (franc’s value appreciated) significantly from late 2007 until late 2011. In the end, the franc appreciated over 60 percent causing the value of the debt to increase by approximately GBP 100 million. ... [T]he increased loan value triggered the 67 percent loan-to-value (LTV) limit clause in the financing because the new ratio would have exceeded 79 percent under the new exchange rate.

"As a result of the increased LTV ratio exceeding the contractual limit, the consortium of financing banks, led by BayernLB, demanded more collateral and blocked the flow of rental income. Thus, in a twist of irony, the owners of a building leased to a firm that mitigates risk were unable to navigate the risks of a complicated financial structure and defaulted on their debt. The Gherkin building was placed into receivership in 2013, and was sold in foreclosure to Brazil’s Safra Group for GBP 726 million in 2014 ..."

Jones, Sackley and Watson offer a detailed description of how to walk through this example in a classroom setting. To me, the example is especially interesting because it's a vivid example of the subtle ways that exchange rate risk can arise. One of my standard examples of exchange rate risk involves working through what would happen to a bank in Thailand that borrowed in US dollars, but loaned in Thai baht. A sharp depreciation of the baht can then make it impossible to repay the US dollar loan, as in the east Asian financial crisis of 1998-99 (for discussion, see Ch. 31 of my principles of economics textbook). But apparently, the rent from the tenants of the Gherkin was enough to continue paying off the debts involved in its purchase. In this case, the foreign exchange risk instead arose from how the exchange rate movements affected the loan-to-value ratio in the contract.