Brexit: Still a Process, Not Yet a Destination

I happened to be in the United Kingdom on a long-planned family vacation on June 23, 2016, when the Brexit vote took place. At the time, I offered a stream-of-consciousness "Seven Reflections on Brexit" (June 26, 2016). But more than year has now passed, and Thomas Sampson sums up the research on what is known and what might come next in "Brexit: The Economics of International Disintegration," which appears in the Fall 2017 issue of the Journal of Economic Perspectives.

(As regular readers know, my paying job--as opposed to my blogging hobby--the Managing Editor of the JEP. The American Economic Association has made all articles in JEP freely available, from the most recent issue back to the first. For example, you can check out the Fall 2017 issue here.)

Here's Sampson's basic description of the UK and its position in the international economy before Brexit. For me, it's one of those descriptions that doesn't use any weighted rhetoric, but nonetheless packs a punch.


"The United Kingdom is a small open economy with a comparative advantage in services that relies heavily on trade with the European Union. In 2015, the UK’s trade openness, measured by the sum of its exports and imports relative to GDP, was 0.57, compared to 0.28 for the United States and 0.86 for Germany (World Bank 2017). The EU accounted for 44 percent of UK exports and 53 percent of its imports. Total UK–EU trade was 3.2 times larger than the UK’s trade with the United States, its second-largest trade partner. UK–EU trade is substantially more important to the United Kingdom than to the EU. Exports to the EU account for 12 percent of UK GDP, whereas imports from the EU account for only 3 percent of EU GDP. Services make up 40 percent of the UK’s exports to the EU, with “Financial services” and “Other business services,” which includes management consulting and legal services, together comprising half the total. Brexit will lead to a reduction in economic integration between the United Kingdom and its main trading partner."

A substantial reduction in trade will cause problems for the UK economy. Of course, the estimates will vary according to just what model is used, and Sampson runs through the main possibilities. He summarizes in this way:


"The main conclusion of this literature is that Brexit will make the United Kingdom poorer than it would otherwise have been because it will lead to new barriers to trade and migration between the UK and the European Union. There is considerable uncertainty over how large the costs of Brexit will be, with plausible estimates ranging between 1 and 10 percent of UK per capita income. The costs will be lower if Britain stays in the European Single Market following Brexit. Empirical estimates that incorporate the effects of trade barriers on foreign direct investment and productivity find costs 2–3 times larger than estimates obtained from quantitative trade models that hold technologies fixed."

What will come next after Brexit isn't yet clear, and may well take years to negotiate. In the meantime, the main shift seems to be that the foreign exchange rate for the pound has fallen, while inflation has risen, which means that real inflation-adjusted wages have declined. This national wage cut has helped keep Britain's industries competitive on world markets, but it's obviously not a desirable long-run solution. 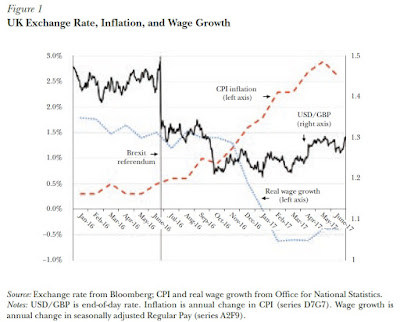 But in the longer run, as the UK struggles to decide what actually comes next after Brexit, Sampson makes a distinction worth considering: Is the opposition to Brexit about national identity and taking back control, even if it makes the country poorer, or is it about renegotiating trade agreements and other legislation to do more to address the economic stresses created by globalization and technology? He writes:

"Support for Brexit came from a coalition of less-educated, older, less economically successful and more socially conservative voters who oppose immigration and feel left behind by modern life. Leaving the EU is not in the economic interest of most of these left-behind voters. However, there is currently insufficient evidence to determine whether the leave vote was primarily driven by national identity and the desire to “take back control” from the EU, or by voters scapegoating the EU for their
economic and social struggles. The former implies a fundamental opposition to deep economic and political integration, even if such opposition brings economic costs, while the later suggests Brexit and other protectionist movements could be addressed by tackling the underlying reasons for voters’ discontent."

For me, one of the political economy lessons of Brexit is that relatively easy to get a majority against a specific unpopular element of the status quo, while leaving open the question of what happens next. It's a lot harder to get a majority in favor of a specific change. That problem gets even harder when it comes to international agreements, because while it's easy for UK politicians to make pronouncements on what agreements the UK would prefer, trade negotiators in the EU, the US, and the rest of the world have a say, too. Sampson discusses the main post-Brexit options, and I've blogged about them in "Brexit: Getting Concrete About Next Steps" (August 2, 2016). While the process staggers along, this "small open economy with a comparative advantage in services that relies heavily on trade with the European Union" is adrift in uncertainty.
Posted by Timothy Taylor at 10:49 AM