The Darker Side of Peer-to-Peer Lending

Peer-to-peer lending refers to an economic transaction in which individual investors lend directly to individual borrowers using online platforms. Yuliya Demyanyk, Elena Loutskina, and Daniel Kolliner illuminate the darker side of such arrangements in "Three Myths about Peer-to-Peer Loans," written as an "Economic Commentary" for the Federal Reserve Bank of Cleveland (November 9, 2017). Their more detailed research paper on the topic is available here. In the "Economic Commentary" piece, the summarize this way:

"Peer-to-peer (P2P) lending came to the United States in 2006, when individual investors began lending directly to individual borrowers via online platforms. In the decade since, the industry has grown dramatically ...  Online lenders and policymakers have suggested that the P2P market offers unique benefits to consumers. Three benefits are often repeated and seem to have become widely accepted. First, P2P loans allow consumers to refinance expensive credit card debt. Second, P2P loans can help customers build their credit history and improve their credit scores. Finally, P2P proponents claim that P2P lending extends access to credit to those who are underserved by traditional banks.

"But signs of problems in the P2P market are appearing. Defaults on P2P loans have been increasing at an alarming rate ...  We exploit a comprehensive set of credit bureau data to examine P2P borrowers, their credit behavior, and their credit scores. We find that, on average, borrowers do not use P2P loans to refinance preexisting loans, credit scores actually go down for years after P2P borrowing, and P2P loans do not go to the markets underserved by the traditional banking system. Overall, P2P loans resemble predatory loans in terms of the segment of the consumer market they serve and their impact on consumers’ finances. Given that P2P lenders are not regulated or supervised for antipredatory laws, lawmakers and regulators may need to revisit their position on online lending marketplaces."


The P2P sector is actually misnamed. As one might have predicted, it very quickly because a market where the supply of loans is not coming from individuals, but rather from institutions like "hedge funds, banks, insurance companies, and asset managers." The amount loaned doubled from 2012 to 2016, and now exceeds $100 billion. 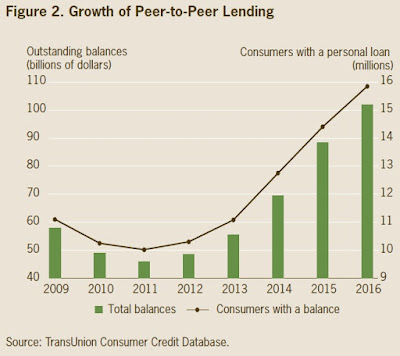 The authors have gained access to some useful data:


Thus, the authors can compare those who take out a P2P loan to a group with similar financial characteristics, and consider whether 1) they have been more successful in reducing their debt burden after a year or two (they haven't); 2) they have been more successful in building up their credit score (they haven't); and 3) they are a group that was less likely to have access to bank loans and other credit before (they aren't).

In a broader view, it's also troubling that each year, even though the economy has been experiencing a mild recovery, the P2P loans seem to be getting riskier. Here is the delinquency rate on P2P loans after one and two years. Each line shows the year in which the loan was made. The delinquency rates are rising over time. 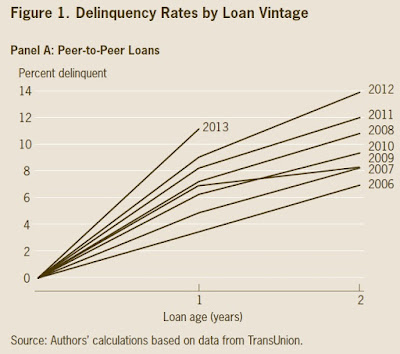 It's useful to be clear on the potential policy problem here. I'm not concerned about the institutions that make P2P loans: they are regulated by the Securities and Exchange Commission, and they can look after themselves. Lots of borrowers seem to be taking on a P2P loan thinking that it's a first step to paying down their existing debt, but for the group as a whole, this expectation isn't being met. If a financial market is in some danger of melting down in a way that could take a few million borrowers along with it--with all the stresses of wage garnishment, charging higher fees for missed payments, property liens, even bankruptcy--that's a public policy problem.