I was hired back in 1986 to be the Managing Editor for a new academic economics journal, at the time unnamed, but which soon was launched as the Journal of Economic Perspectives. The JEP is published by the American Economic Association, which back in 2011 decided--to my delight--that it would be freely available on-line, from the current issue back to the first issue. Here, I'll start with Table of Contents for the just-released Fall 2017 issue, which in the Taylor household is known as issue #122. Below that are abstracts and direct links for all of the papers. I will blog more specifically about some of the papers in the next week or two, as well. 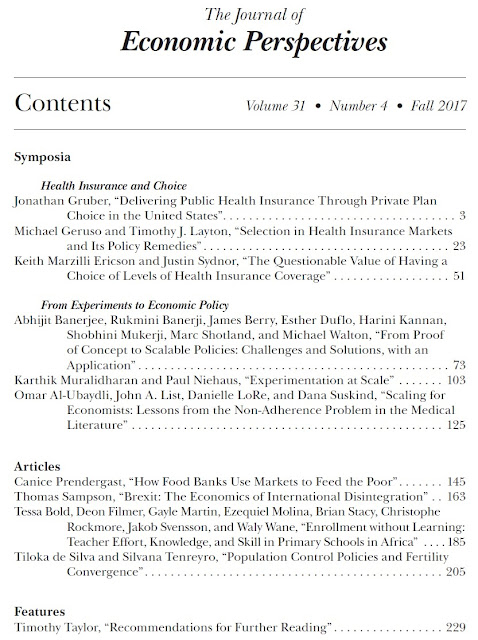 "Delivering Public Health Insurance through Private Plan Choice in the United States," by Jonathan Gruber
The United States has seen a sea change in the way that publicly financed health insurance coverage is provided to low-income, elderly, and disabled enrollees. When programs such as Medicare and Medicaid were introduced in the 1960s, the government directly reimbursed medical providers for the care that they provided, through a classic "single payer system." Since the mid-1980s, however, there has been an evolution towards a model where the government subsidizes enrollees who choose among privately provided insurance options. In the United States, privatized delivery of public health insurance appears to be here to stay, with debates now focused on how much to expand its reach. Yet such privatized delivery raises a variety of thorny issues. Will choice among private insurance options lead to adverse selection and market failures in privatized insurance markets? Can individuals choose appropriately over a wide range of expensive and confusing plan options? Will a privatized approach deliver the promised increases in delivery efficiency claimed by advocates? What policy mechanisms have been used, or might be used, to address these issues? A growing literature in health economics has begun to make headway on these questions. In this essay, I discuss that literature and the lessons for both economics more generally and health care policymakers more specifically.
Full-Text Access | Supplementary Materials


"Selection in Health Insurance Markets and Its Policy Remedies," by Michael Geruso and Timothy J. Layton
Selection (adverse or advantageous) is the central problem that inhibits the smooth, efficient functioning of competitive health insurance markets. Even—and perhaps especially—when consumers are well-informed decision makers and insurance markets are highly competitive and offer choice, such markets may function inefficiently due to risk selection. Selection can cause markets to unravel with skyrocketing premiums and can cause consumers to be under- or overinsured. In its simplest form, adverse selection arises due to the tendency of those who expect to incur high health care costs in the future to be the most motivated purchasers. The costlier enrollees are more likely to become insured rather than to remain uninsured, and conditional on having health insurance, the costlier enrollees sort themselves to the more generous plans in the choice set. These dual problems represent the primary concerns for policymakers designing regulations for health insurance markets. In this essay, we review the theory and evidence concerning selection in competitive health insurance markets and discuss the common policy tools used to address the problems it creates. We emphasize the two markets that seem especially likely to be targets of reform in the short and medium term: Medicare Advantage (the private plan option available under Medicare) and the state-level individual insurance markets.
Full-Text Access | Supplementary Materials

"The Questionable Value of Having a Choice of Levels of Health Insurance Coverage," by Keith Marzilli Ericson and Justin Sydnor
In most health insurance markets in the United States, consumers have substantial choice about their health insurance plan. However additional choice is not an unmixed blessing as it creates challenges related to both consumer confusion and adverse selection. There is mounting evidence that many people have difficulty understanding the value of insurance coverage, like evaluating the relative benefits of lower premiums versus lower deductibles. Also, in most US health insurance markets, people cannot be charged different prices for insurance based on their individual level of health risk. This creates the potential for well-known problems of adverse selection because people will often base the level of health insurance coverage they choose partly on their health status. In this essay, we examine how the forces of consumer confusion and adverse selection interact with each other and with market institutions to affect how valuable it is to have multiple levels of health insurance coverage available in the market.
Full-Text Access | Supplementary Materials

"From Proof of Concept to Scalable Policies: Challenges and Solutions, with an Application," by Abhijit Banerjee, Rukmini Banerji, James Berry, Esther Duflo, Harini Kannan, Shobhini Mukerji, Marc Shotland and Michael Walton
The promise of randomized controlled trials is that evidence gathered through the evaluation of a specific program helps us—possibly after several rounds of fine-tuning and multiple replications in different contexts—to inform policy. However, critics have pointed out that a potential constraint in this agenda is that results from small "proof-of-concept" studies run by nongovernment organizations may not apply to policies that can be implemented by governments on a large scale. After discussing the potential issues, this paper describes the journey from the original concept to the design and evaluation of scalable policy. We do so by evaluating a series of strategies that aim to integrate the nongovernment organization Pratham's "Teaching at the Right Level" methodology into elementary schools in India. The methodology consists of reorganizing instruction based on children's actual learning levels, rather than on a prescribed syllabus, and has previously been shown to be very effective when properly implemented. We present evidence from randomized controlled trials involving some designs that failed to produce impacts within the regular schooling system but still helped shape subsequent versions of the program. As a result of this process, two versions of the programs were developed that successfully raised children's learning levels using scalable models in government schools. We use this example to draw general lessons about using randomized control trials to design scalable policies.
Full-Text Access | Supplementary Materials


"Experimentation at Scale," by Karthik Muralidharan and Paul Niehaus
This paper makes the case for greater use of randomized experiments "at scale." We review various critiques of experimental program evaluation in developing countries, and discuss how experimenting at scale along three specific dimensions—the size of the sampling frame, the number of units treated, and the size of the unit of randomization—can help alleviate the concerns raised. We find that program-evaluation randomized controlled trials published over the last 15 years have typically been "small" in these senses, but also identify a number of examples—including from our own work—demonstrating that experimentation at much larger scales is both feasible and valuable.
Full-Text Access | Supplementary Materials

"Scaling for Economists: Lessons from the Non-Adherence Problem in the Medical Literature," by Omar Al-Ubaydli, John A. List, Danielle LoRe and Dana Suskind
Economists often conduct experiments that demonstrate the benefits to individuals of modifying their behavior, such as using a new production process at work or investing in energy saving technologies. A common occurrence is for the success of the intervention in these small-scale studies to diminish substantially when applied at a larger scale, severely undermining the optimism advertised in the original research studies. One key contributor to the lack of general success is that the change that has been demonstrated to be beneficial is not adopted to the extent that would be optimal. This problem is isomorphic to the problem of patient non-adherence to medications that are known to be effective. The large medical literature on countermeasures furnishes economists with potential remedies to this manifestation of the scaling problem.
Full-Text Access | Supplementary Materials

"How Food Banks Use Markets to Feed the Poor," by Canice Prendergast
A difficult issue for organizations is how to assign valuable resources across competing opportunities. This work describes how Feeding America allocates about 300 million pounds of food a year to over two hundred food banks across the United States. It does so in an unusual way: in 2005, it switched from a centralized queuing system, where food banks would wait their turn, to a market-based mechanism where they bid daily on truckloads of food using a "fake" currency called shares. The change and its impact are described here, showing how the market system allowed food banks to sort based on their preferences.
Full-Text Access | Supplementary Materials

"Brexit: The Economics of International Disintegration," by Thomas Sampson
On June 23, 2016, the United Kingdom held a referendum on its membership in the European Union. Although most of Britain's establishment backed remaining in the European Union, 52 percent of voters disagreed and handed a surprise victory to the "leave" campaign. Brexit, as the act of Britain exiting the EU has become known, is likely to occur in early 2019. This article discusses the economic consequences of Brexit and the lessons of Brexit for the future of European and global integration. I start by describing the options for post-Brexit relations between the United Kingdom and the European Union and then review studies of the likely economic effects of Brexit. The main conclusion of this literature is that Brexit will make the United Kingdom poorer than it would otherwise have been because it will lead to new barriers to trade and migration between the UK and the European Union. There is considerable uncertainty over how large the costs of Brexit will be, with plausible estimates ranging between 1 and 10 percent of UK per capita income. The costs will be lower if Britain stays in the European Single Market following Brexit. Empirical estimates that incorporate the effects of trade barriers on foreign direct investment and productivity find costs 2–3 times larger than estimates obtained from quantitative trade models that hold technologies fixed.
Full-Text Access | Supplementary Materials


"Enrollment without Learning: Teacher Effort, Knowledge, and Skill in Primary Schools in Africa," by Tessa Bold, Deon Filmer, Gayle Martin, Ezequiel Molina, Brian Stacy, Christophe Rockmore, Jakob Svensson and Waly Wane
School enrollment has universally increased over the last 25 years in low-income countries. Enrolling in school, however, does not assure that children learn. A large share of children in low-income countries complete their primary education lacking even basic reading, writing, and arithmetic skills. Teacher quality is a key determinant of student learning, but not much is known about teacher quality in low-income countries. This paper discusses an ongoing research program intended to help fill this void. We use data collected through direct observations, unannounced visits, and tests from primary schools in seven sub-Saharan African countries to answer three questions: How much do teachers teach? What do teachers know? How well do teachers teach?
Full-Text Access | Supplementary Materials


"Population Control Policies and Fertility Convergence," by Tiloka de Silva and Silvana Tenreyro
Rapid population growth in developing countries in the middle of the 20th century led to fears of a population explosion and motivated the inception of what effectively became a global population- control program. The initiative, propelled in its beginnings by intellectual elites in the United States, Sweden, and some developing countries, mobilized resources to enact policies aimed at reducing fertility by widening contraception provision and changing family-size norms. In the following five decades, fertility rates fell dramatically, with a majority of countries converging to a fertility rate just above two children per woman, despite large cross-country differences in economic variables such as GDP per capita, education levels, urbanization, and female labor force participation. The fast decline in fertility rates in developing economies stands in sharp contrast with the gradual decline experienced earlier by more mature economies. In this paper, we argue that population-control policies likely played a central role in the global decline in fertility rates in recent decades and can explain some patterns of that fertility decline that are not well accounted for by other socioeconomic factors.
Full-Text Access | Supplementary Materials

Posted by Timothy Taylor at 9:58 AM